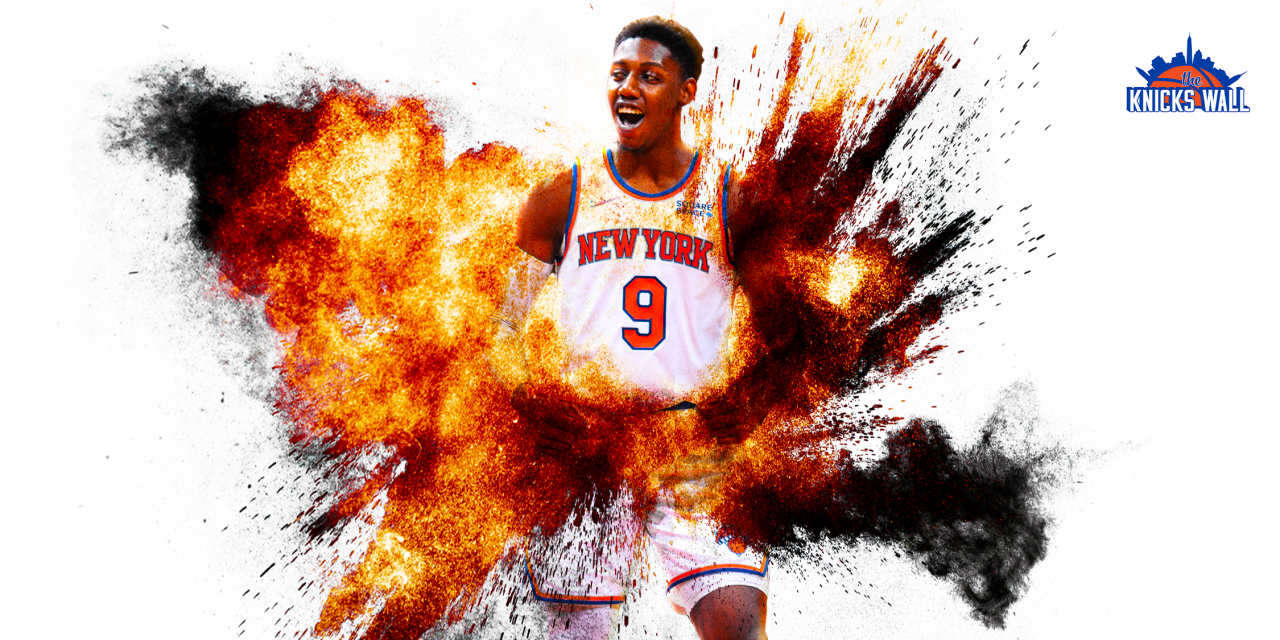 The Knicks produced a whole lot of memorable performances in the 2021-22 season. As the new season draws closer, let’s look back at the top 10.

It has been pretty quiet on the free-agency end since the initial first day of the signing frenzy for the New York Knicks. The Donovan Mitchell trade talks have died down recently as Leon Rose and Danny Ainge continue their staring contest. But don’t fear; there are plenty of good things to look forward to as the new season draws ever closer.

For now, it’s time to look at some of the best individual performances from the previous season. Even though the season didn’t go as planned, the Knicks still provided plenty of memorable moments worth revisiting. From a Slam Dunk championship to a Christmas Day to remember, here are some of the Knicks’ best individual performances from last season.

Keep in mind that this list is in no particular order.

RJ Barrett had plenty of great performances this past season but one of the more eye-opening ones was a loss against LeBron James and the Lakers in Los Angeles. Barrett scored 36 points, including 17 in the first quarter alone. He would also hit big shots down the stretch including a three-pointer to force overtime. After the game, Lebron himself sang Barrett’s praises.

Immanuel Quickley is the darling of Knicks fans, he’s the child that could do no wrong. All season long fans, clamored for him to have a larger role and even start. While a larger role is definitely on the horizon, the addition of Jalen Brunson means that starting is probably out of the question. Quickley figures to be a big part of what the ‘Bockers do going forward if he’s not traded in that elusive Donovan Mitchell trade.

Julius Randle’s time on the Knicks has been a rollercoaster. After the 2021 season, it looked like he had emerged as one of the premiere talents in the NBA. After securing his first All-Star selection, the Most Improved Player award, and being named to the All-NBA second team, he had become the main man in New York after having a campaign nobody envisioned. Unfortunately, Julius wasn’t able to replicate the previous season’s heroics.

Despite the public perception and occasional beef with fans, Randle had a good season. He averaged 20.1 points per game to go with 9.9 rebounds and 5.1 assists. Randle was still the main option in New York despite a tumultuous season. He reminded everyone what he’s capable of versus the lowly Kings when scored 46 points while knocking down a career-high 8 three-pointers in a 131-115 victory.

Julius Randle was on FIRE last night, putting up a career-high 46 points in a comeback win vs Sacramento.

Evan Fournier erupts for a career night vs. the Celtics in an instant classic.

Evan Fournier was the most polarizing player (other than Julius Randle) on the Knicks last season. The Frenchman signed a four-year, $78 million dollar contract last summer to come to New York and while his play was most underwhelming, Fournier did break the Knicks’ single season for made three-pointers with 241. He also had a tendency to have big games on national TV — but more importantly against his former team, the Boston Celtics.

Whether it was the extra motivation or revenge, Fournier stuck it to the Celtics more than any other opponent on multiple occasions last season. In three games versus Boston last season, Fournier averaged 35 points a game while shooting an astronomical 54.1% from behind the arc.

RJ BARRETT FOR THE WIN pic.twitter.com/YXhFr5aqkt

Barrett, as you all know, is New York’s golden child. He continues to work hard and proves day and day out why he’s the heir apparent to the next franchise player. While Barrett doesn’t receive the same recognition other young players around the league do the numbers don’t lie. Barrett continued to improve with each passing game last season as dealt with the ups and downs and young any NBA player deals with.

This is a unique entry to the list because it’s more about the moment than the performance. On a January night, as the Knicks were teetering around a .500 record, Barrett was having a game to forget versus the eventual Eastern Conference champion Celtics. But his Knicks were battling the game was close and as it was coming to down the wire Barrett’s number was called one last time. With the score tied 105-105 and just 1.5 left in regulation, New York was coming out of their final timeout.

With Alec Burks inbounding to an incoming Barrett, he was just able to get off a leaning jumper from the left wing behind the three-point line over Jayson Tatum, who was playing perfect defense. Barrett knocked down the buzzer-beater to seal the victory by a score of 108-105 in what was probably the most exhilarating moment of the season.

After a slow start to the season, Barrett began to take a more prominent role in the offense. Before this season Barrett had only scored 30 points once in his career, this past season though Barrett scored 30 points 11 times. In January, Barrett’s scoring started taking off as he became more assertive on offense and for the first time in his short career he averaged 20 points per game. In a game versus the Miami Heat, Barrett was particularly hot and would score a career-high 46 points in the loss. He showed full repertoire as shot a whopping 22 free throws hitting 14 of them and also knocked 6 three-pointers.

KEMBA GETS HIS TRIPLE DOUBLE! pic.twitter.com/4W3t2NsdNp

While Kemba Walker’s stint with his hometown Knicks was short-lived and ended with a disappointing injury he made sure to leave his mark. The Bronx native will forever have a small piece in Knicks history. In their first Christmas game since 2018, Kemba gave Knicks fans a gift, he became the first Knick ever to collect and triple-double versus the now hated Atlanta Hawks on Christmas. While the final stat line isn’t eye-popping — 10 points, 12 assists, and 10 rebounds — Kemba made sure to cement himself in Knicks lore.

7. Kemba Walker goes off vs. the Washington Wizards

As previously mentioned, Kemba didn’t last long in New York and there was much left to be desired. But for a short spurt in December, Walker regained his vintage form. Culminating in a game versus the Wizards, he gave New York a taste of how things used to be. Walker had the second-highest scoring game for the Knicks all season with 44 points, only behind Randle and Barrett, who both scored 46. After being shut done for the season in late February, Walker was subsequently traded to the Detriot Pistons this summer.

Quinten Grimes is hot right now. Coming off a monster Summer League he has turned himself into the apple of many fans’ eyes and has seemingly caught the attention of the Utah Jazz as his name has also swirled in rumors as a possible trade chip for a Donovan Mitchell acquisition. To Knicks fans, though, the potential was always there.

Grimes gave the Knicks a glimpse of things to come in a December game versus the then-defending champs, the Milwaukee Bucks. With Barrett out due to health and safety protocols, Grimes had his number called and was placed in the starting lineup. In a memorable game, Grimes proceeded to score a career-high 27 points and break the Knicks Rookie record for made three-pointers in a game with seven.

We’re still on the Obi Toppin hype train but that’s because he deserves the attention. While he was a lottery pick, Obi was drafted to a team that already had a pretty good player at his position. When you’re playing behind a guy coming off an all-star season where he was named most improved and to the All-NBA second team, your playing time is going to be sporadic, to say the least. For Toppin, he was able to start in the games Randle couldn’t play.

In those 10 games, Obi started averaged 20.3 points, showcasing his ability to score proving he’s more than just a highlight dunker. In the final game of the season with Randle sitting with an injury, Toppin left a lasting impression by going off for a career-high 42 points versus the Toronto Raptors to end his season on a high note. Toppin also continued his red-hot outstanding shooting at the time matching a career-high six made three-pointers in the contest.

The 2020 first-round pick has quickly become a fan favorite in New York. Toppin didn’t have to do much as a native New Yorker but he captured the hearts of The Garden faithful with his infectious energy, high motor, and most his impressive dunking ability. Whether it’s catching an alley-oop or having an open lane to the rim Toppin is “bound to astound” with his high-flying flushes.

Toppin’s dunking prowess is no accident, his father is New York City black top and And1 mixtape legend “Dunker’s Delight”. The senior Toppin was able to witness his offspring live up to the family name by winning the 2022 Slam Dunk contest. He became the third Knick to do so and broke a tie with Hawks for most all-time as a franchise with five.

»READ: Summer Living: Catching Up with the 2022 Knicks

»READ: Who Should Be the Knicks Starting Shooting Guard?