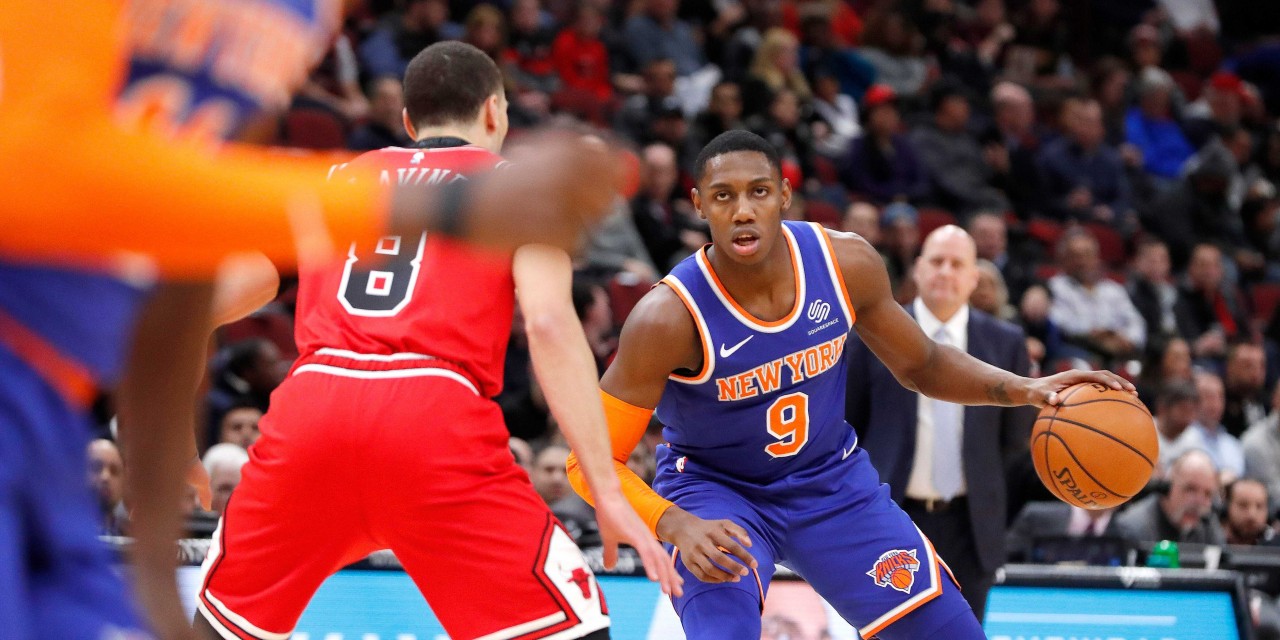 The Knicks look to capitalize against a slumping Bulls squad led by All-Star hopeful Zach LaVine in two straight meetings in Chicago.

The New York Knicks (9-12) pack their bags as they visit the Chicago Bulls (7-11) for the next two games. The Knicks are coming off a 129-115 loss to the Los Angeles Clippers on Sunday, while the Bulls enter the meetup with a three-game losing streak. This is a matchup between two non-contending teams with solid starts to the season, looking to continue and build towards a potential spot in the play-in series. Currently, the Knicks rank ninth in the Eastern Conference, while the Bulls are sitting 11th.

Both of these teams are in an interesting spot at the moment. Ultimately, the Bulls and Knicks show the ups and downs of rebuilding.

Chicago’s current roster feels like they’re in the midst of transition. Despite having a legitimate All-Star (Zach LaVine) and four top-10 picks on the roster, the Bulls feel like they’re on the verge of starting over, looking to renovate the roster around their recent lottery picks. A new executive vice president and general manager (Arturas Karnisovas, Marc Eversley) and head coach (Billy Donovan) will do that for you, but this group of players feels like they’re not quite good enough. As some reach their second contracts, questions about who to keep or let go will come up soon.

While Chicago feels like they’re on the downside of their young talent, the Knicks appear to be on the upswing. R.J. Barrett is putting things together, Julius Randle is on the verge of an All-Star appearance, and Immanuel Quickley is the toast of the town. Former Bulls head coach Tom Thibodeau, now with the Knicks, is making his mark installing defensive principles. With cap space and draft picks to splurge on moving forward, the Knicks feel like this is just the beginning, while the Bulls feel like a renovation is in order.

Bulls star Zach LaVine is a player of note for both teams. LaVine has another excellent season in the making, averaging 26.9 points, 5.3 rebounds, 5.2 assists, and a blistering 41.6% from the three-point line. As the Bulls get their priorities in order, they must consider what they want to do with LaVine, who has two years left on his contract. Just this past week, SNY’s Ian Begley reported the Knicks have an interest; those conversations are sure to heat up as the two squads come to a head.

Zooming out to the Bulls as a whole, Chicago has clear strengths and weaknesses. Under Donovan, Chicago ranks 15th in the league in offensive efficiency and 27th in the league in defense, per NBA.com/Stats. We’ve mentioned LaVine, but Lauri Markkanen (19.6 points, 6.5 rebounds, 40 3P%) is having a stellar season, putting it all together on offense. Coby White (15.5 points, 5.7 assists) has played well in a pseudo combo-guard role, while rookie Patrick Williams (9.5 points, 3.8 assists, 43 3P%) is flashing all-around skill on both sides of the ball.

The defense, however, is a mess. Chicago can get stops, ranking second in the league with a 76.2% defensive rebounding rate. But when they allow baskets, they allow them in bunches. LaVine, Markkanen, and White are all defensive negatives, while Williams is still adjusting to NBA play. Wendell Carter Jr., the seventh overall pick in 2018 who is currently sidelined with a “severe” quad injury, hasn’t evolved into that solid defensive presence many thought he would was coming out of Duke. The veterans on the team—Otto Porter, Tomas Satoransky, and Thaddeus Young—have been solid, but it hasn’t translated into stable lineups defensively.

The Tortoise and the Hare: New York vs. Chicago is also an intriguing matchup from a pace perspective. The Bulls currently rank second in the league in pace, tied with the Golden State Warriors, while New York ranks last. Chicago will want to get the tempo cranked up and shoot threes, while the Knicks want to slow the game down and limit possessions. It’ll be interesting to see how both teams look to impose their will early in the game.

Chicago’s outside shooting: The Bulls have some reliable shooters on the roster, with five players in their rotation shooting 40% from three or higher. The Knicks give up a ton of above-the-break threes, so the Bulls could take advantage of that area with White, LaVine, and even Markkanen on high pick-and-pop to force New York’s hand on defense.

R.J. Barrett vs. Chicago’s defense: As we mentioned previously, the Bulls struggle defensively, but they have some exciting wing defenders who can pester Barrett. Guys like Porter Jr. and Williams both have the length, size, and defensive I.Q. to keep Barrett at bay, much like Ben Simmons did earlier in the season. This is an excellent test for Barrett as he continues to keep his hot streak going.

Immanuel Quickley vs. Chicago’s defense: This is a game for Quickley to get up and down the court against Chicago’s guards. Neither LaVine nor White are solid defenders, which should allow Quickley to get into the middle of the floor and attack Chicago, whether it be one of his trademark floaters or some dump-offs to shooters.

QUICK TO THE MOON 🚀🚀🚀@IQ_GodSon today vs. Clippers:

Consider this one of the more intriguing matchups for the Knicks to start the month. Not only because of the pace difference, but because the Bulls have talent that could truly pester New York’s defense. Markkanen’s shooting could give Mitchell Robinson fits, and we already talked about Porter and Williams against Barrett.

Despite Chicago being in the middle of their cycles, the Bulls are still within two games of the Knicks and a spot in the play-in series. Chicago would be another excellent game for Barrett and Quickley to shine, but with a player like LaVine on the other side, you never know what could happen. The Knicks have had a few strong performances against good teams, and have primarily taken care of business against teams they’re supposed to defeat.

Tip-off is set for 8 p.m. ET from the snow-clad Windy City.