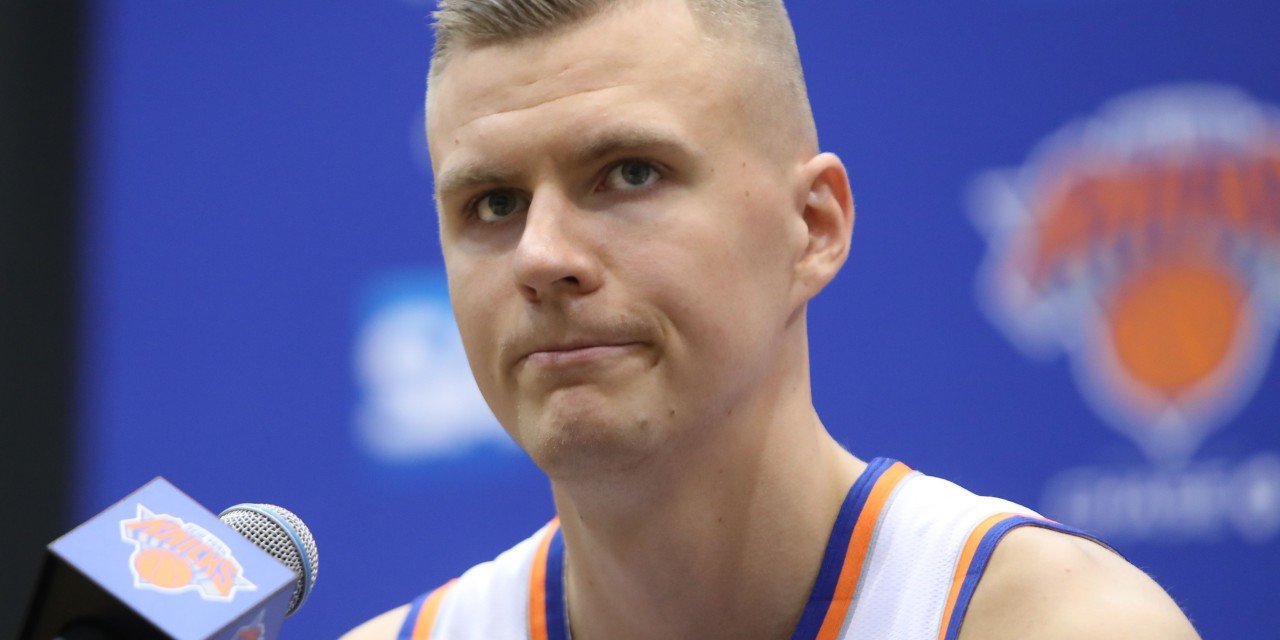 Trade talks escalated following reports of Kristaps Porzingis meeting with Knicks brass and expression concern with direction of the franchise.

Multiple reports have made clear that the New York Knicks are trading All-Star power forward Kristaps Porzingis to the Dallas Mavericks.

The Knicks lost to the Mavs on Wednesday night as Porzingis continued to sit out during the 2018–19 season while rehabilitating his ACL tear. Smith Jr. earned his second career triple-double.

ESPN’s Wojnarowski reported a deal was being finalized; The Athletic’s Shams Charania reported the two teams were in “deep discussions”; the New York Times‘ Marc Stein said a deal was imminent; and The Ringer’s Kevin O’Connor tweeted the package would send Tim Hardaway Jr. and Courtney Lee to Dallas for Wesley Matthews, DeAndre Jordan, Smith Jr., and a future first-round pick.

Charania added Trey Burke would be sent to Dallas, too.

Later in the afternoon, Wojnarowski and Shelburne also reported that Porzingis “prefers” to be traded from New York.

Ultimately, trade talks accelerated in the afternoon with multiple outlets reporting a deal was reached between Dallas and New York.

This is not the first flare-up between Porzingis and Knicks management. A long-held grievance between the two sides has been the progress of KP’s rehabilitating ACL tear suffered February 2018 and a return date for the power forward. In November of 2018, Porzingis posted on Instagram a photo of himself mid-sprint seemingly in response to head coach David Fizdale comments downplaying the fourth-year player’s rehab progress.

“He’s still kind of there,” Fizdale said. “Not huge jumps.”

KP responds to reports that he hasn’t progressed past light jogging pic.twitter.com/Xsqpks6z39

Porzingis made headlines in the summer of 2017 when he skipped out on his exit interview with then-president Jackson. Coming off his sophomore season, KP expressed dismay with status of the team as a 21-year-old, and then-coach Jeff Hornacek was a particular grievance for Porzingis.

More recently, extension talks between Porzingis’ management (he’s represented by brother Janis) and New York stalled and eventually ended before the deadline. Back then, pundits wagered the lack of concrete extension talks could relate to a salary cap loophole that extending Porzingis in the offseason could contribute another $10 million free to sign players in the summer.

Going back further, during Porzingis’ draft process, the future All-Star reportedly denied a workout with Philadelphia, who held the third pick, in front of the Knicks.

Porzingis’ name had been mentioned as the center of a trade package to net the ‘Bockers five-time All-Star Anthony Davis from New Orleans.

UPDATE: The Athletic’s Shams Charania reports Porzingis intends to sign the qualifying offer in the summer, thus making him an unrestricted free agent in 2020.

UPDATE.2: Charania adds the Knicks will be compensated by two future first-round picks.

UPDATE.3: The trade is official, the team announced, read below:

UPDATE.5: The Daily News‘s Stefan Bondy tweeted the Mavs keep their 2021 first-round pick if this year’s pick lands in the top five. There’s no word whether the status of the 2023 first-round pick, reported to be top-10 protected) has changed.

Sorry, here's the clarity: The Knicks get the 2021 pick unless Dallas’ 2019 pick lands in the top-5. Knicks need Dallas to end up outside of the top-5 so that they can convey the pick to Altanta. Knicks get their pick 2 years after Atlanta receives a first-round pick from Dallas

Knicks GM Scott Perry just said the Knicks will get the Mavericks' 2021 pick unprotected and then there are protections on the 2023 pick. These would obviously be the protections. https://t.co/aIofJRUkM5

This story is breaking and the post will be updated to reflect new details.