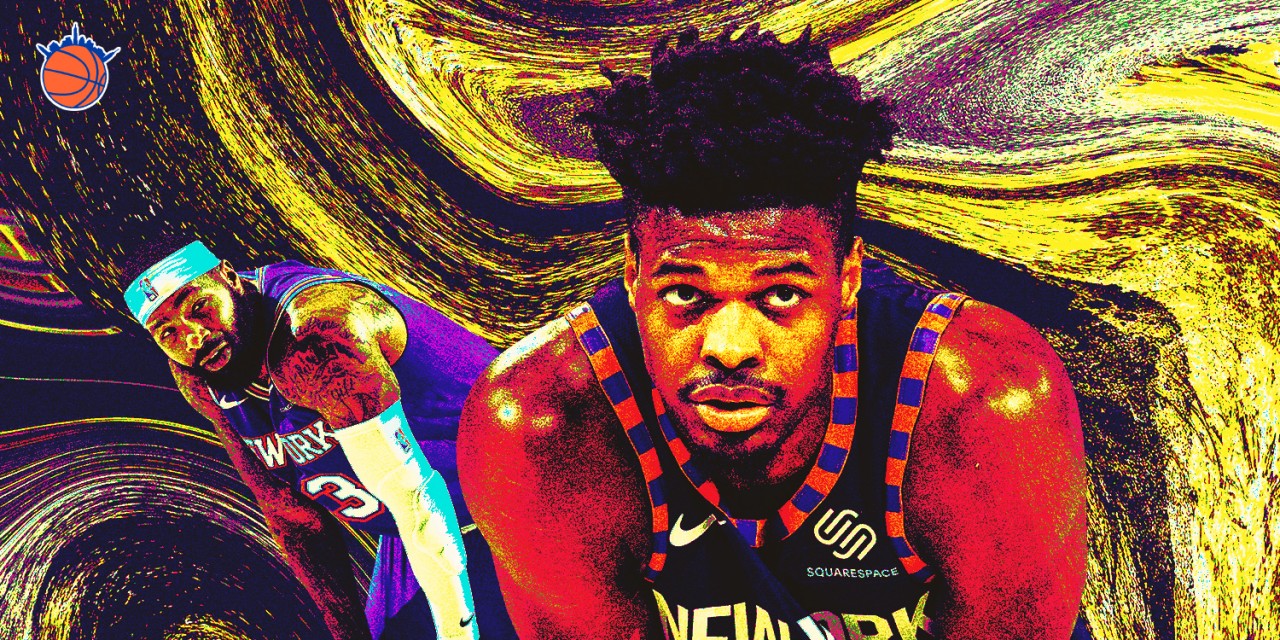 There hasn’t been a flurry of moves yet, but the stovetop has only heated up with trade rumors, especially with a few Knicks with one foot out the door.

It’s been just over two weeks since The Knicks Wall published the trade season primer, and while the only official move to happen in that time was the Utah Jazz trading Dante Exum for Jordan Clarkson, don’t mistake the placid surface of Lake Personnel Change for a lack of activity below.

Already we’ve seen rumors that Karl-Anthony Towns, the 24-year-old New Jersey native on track to be the best-shooting big man in league history, may be unhappy in Minnesota and looking for a way out, that “a few” Knicks might want out of New York, that Malik Beasley and Juancho Hernangómez may be available but for a higher price than teams would like to pay ahead of their upcoming restricted free agency, and that Dewayne Dedmon is unhappy in Sacramento and would like to be moved.

Starting to hear a lot team's think this could be a busy trade deadline. One executive told me: "No good free agents this summer. Only a couple of teams with cap space. And 2021 is overrated. A few great guys that most of us can't get. That opens up trades for right now."

None of this is entirely surprising. While Towns is in the first of a five-year max extension, the Timberwolves are a dumpster fire that somehow managed to win four fewer games than the Knicks in the month of December. The Nuggets have incredible depth and no way to pay all of their talented young guys—not with Jamal Murray, Gary Harris, Will Barton and Nikola Jokic all in the early stages of big extensions and Paul Millsap expiring in the summer. Dedmon was the overpay of the summer, especially for a team that needs to give their prize second-year big man as much playing time as possible, and he had the misfortune of starting the season ice cold at the same time Richaun Holmes morphed into a dominant, two-way center seemingly overnight.

As for the Knicks, it’s hardly a shock that guys would want out, even with their 6-6 record since Mike Miller’s ascendence. This is a team caught moving in two directions: trying to rebuild while also being stocked with younger veterans on short-term deals. The older guys are sure to be looking for a way onto competitive teams, while the at-times erratic lineup decisions have left some of the younger guys on the outside of the rotation looking in.

That’s why it’s only natural to see tweets like this pop up on the timeline as we get closer and closer to the February trade deadline:

Multiple Knicks players are convinced that they won't finish the season in New York. With several guys on one-year or pseudo one-year deals (light guarantees next year) that can fill roles for playoff teams, expect New York to be linked to just about every other team in the NBA.

For my money, this is the exact right approach to be taking. Do I love that Scott Perry and Steve Mills are still making decisions, especially with the uncertainty surrounding their jobs? I don’t. But it’s probably better than bringing in someone new to be in charge only until the end of the season.

Perry’s trade record is spotty—the Carmelo Anthony trade brought back the pick that became Mitchell Robinson, but the Kristaps Porzingis deal, while inconclusive until the Dallas picks convey, looks like a bit of a disaster. He was finessed by Sam Hinkie in the Elfrid Payton draft and the Dwight Howard trade was…complicated (the return was okay, but what was done with the pieces that came back was less so). But for better or worse, he’s who the Knicks have for now.

As for the “few players” mentioned by SNY’s Ian Begley as preferring to be moved, there are a couple guys who spring to mind. While Dennis Smith Jr. recently (rather tepidly) denied the rumors that he wants out of the Garden, it makes sense. He hasn’t gotten any traction this season due to injuries as well as what seems like some mental roadblocks, he’s lost his spot in the rotation almost entirely, and he’s had his home fanbase loudly cheer that they want the other guy, not him. It’s been a rough go of it for Smith and a fresh start (Minnesota is rumored to have interest) could very well be what’s best for both sides.

Speaking of losing your spot in the rotation, Allonzo Trier seems like another likely candidate to be among those privately angling for a trade. He went from getting 23 minutes a night and all the shots he wanted to getting seven DNP-CD’s in the last 15 games, and he’s had semi-public rumblings before. And in a way, he’s right to be upset. While the team is playing better of late, they have been, on the whole, awful for much of the season, while Trier has played decent ball when he’s been out there. He could genuinely help a team in need of scoring punch—say the Sixers or Pistons or Magic. And with restricted free agency coming up, it makes some sense to look to move him now.

The really interesting part will be the Knicks trio of volume-scoring bigs. Marcus Morris has publicly claimed he’s “built for [New York]” and said he wants to stay and help turn things around, and why wouldn’t he? He gets all the shots he wants and as many isolation possessions as he can get before Julius Randle gets jealous and wants his turn. Randle, by the way, is playing some of his best ball of the season, has been shooting nearly 40% from three since Miller took over, and even Bobby Portis has been showing signs of life of late.

It’s these guys who will make the biggest difference to the balance of the team, should one be moved. If, say, the Knicks could somehow trade Julius Randle and one of their shooting guards (Trier, Dotson, or Ellington), they could alleviate most of the logjams on the roster while sliding Morris over to the 4, which would allow the team to run another shooter in the lineup. A two-for-one deal would also allow the Knicks to call defensive standout Kenny Wooten up from Westchester and install him as the permanent backup center.

The NBA trade deadline is 35 days away and the Knicks are currently playing by far their best basketball of the season, which should help improve players’ draft stock, but also make it harder to want to move them. One thing’s for sure, though; Scott Perry and Steve Mills have their work cut out for them.

»READ: How invested should the Knicks be in “unhappy” Karl-Anthony Towns?