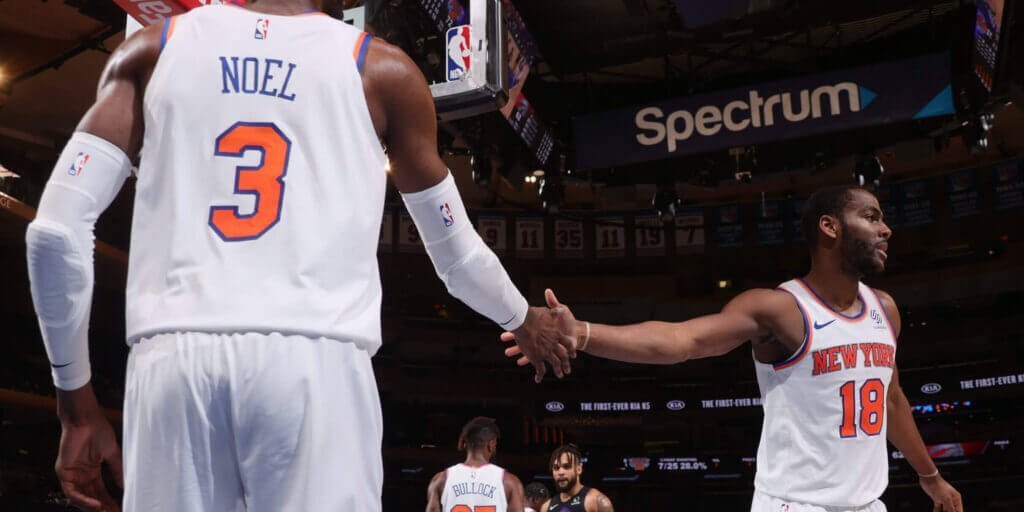 The Knicks and Pistons agreed to a deal that will principally shed Nerlens Noel and Alec Burks (and their salary) ahead of free agency.

The New York Knicks have agreed to a deal to trade veterans swingman Alec Burks and center Nerlens Noel to the Detroit Pistons, per ESPN’s Adrian Wojnarowski.

The Pistons are accepting Burks, Noel, two protected second-rounders, and cash, according to the ESPN deal-breaker. In doing so, the Knicks have dumped $19 million in salary as the franchise poses a threat to sign a big free-agent name come Friday.

Burks, who turns 31 years old in three weeks, spent the 2021–22 NBA season with the Knicks taking more reps at point guard than anybody expected after injury blows and rotation decisions shelved veteran Derrick Rose and Kemba Walker. Burks commanded a struggling Knicks offense buoyed by one-time All-Star power forward Julius Randle that whimpered to the finish line, missing out on a play-in spot a year removed from a fourth-seed in the East.

Noel, 28, spent the past season mostly rehabbing from plantar fasciitis. The Knicks originally signed the former sixth-overall pick in 2020 to a one-year, $5 million contract before re-signing the former Kentucky Wildcat to a three-year, $32 million deal.

The Knicks have been in the process of shedding veterans in order to clear salary cap to sign free agents; chief among them is Dallas Mavericks point guard Jalen Brunson, long coveted by Knicks President of Basketball Operation Leon Rose and the front office. Burks follows Walker as the latest casualty of the salary cap game, clearing way to ink Brunson to a deal around $25 million in average annual value. Walker was dealt on draft night last week to the Detroit Pistons (who plan on releasing him) following New York’s acquisition of multiple protected first-round picks from the Oklahoma City Thunder for the 11th overall pick and the Knicks’ involvement in a three-team deal with the Pistons and Charlotte Hornets for Jalen Duren, the 13th pick.

Burks arrived in New York after spending the previous two seasons with five franchises, signing a one-year, $6 million deal with the Knicks in November of 2020. Rose re-upped Burks (among the other veteran contributors to the 2021 playoff team) to a three-year, $30 million contract with a team option in the third year. Burks averaged 12.1 points, 4.8 rebounds, and 2.7 assists per game in 130 regular-season appearances with the ‘Bockers.

Noel appeared in 89 games across two seasons for the Knicks, helping anchor the paint defense for New York when Mitchell Robinson missed a considerable chunk of the 2020–21 season.

Moving forward, all expectations are on the Knicks to land Brunson on a $100-plus million contract.