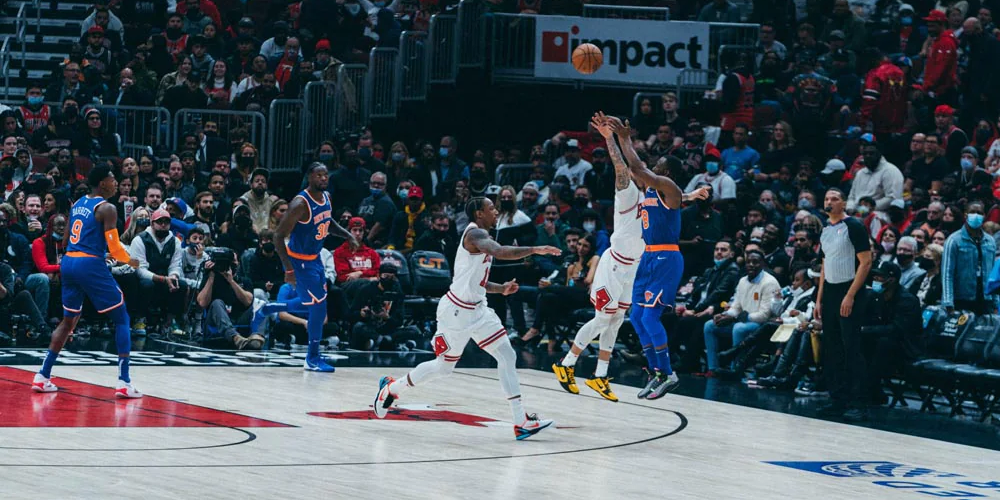 After eking out a victory against the Rockets yesterday, the Knicks play their second game of this back-to-back against a much-improved Bulls team.

The New York Knicks (9-7) will travel to Chicago to take on the Bulls (11-5) tonight at the United Center. In their first meeting earlier this season, the Knicks squeezed out a 104-103 win on the road.

The Bulls are coming into tonight’s matchup fresh off a win against the Denver Nuggets on Friday night. Zach LaVine continued his stellar start to the season, posting 36 points to go along with eight rebounds in the win. The Knicks enter tonight after a 106-99 win against the Houston Rockets where Alec Burks led the charge with 17 fourth-quarter points.

After getting the season off to a good start offensively, the Knicks have found themselves in a bit of a rut. Julius Randle has looked more like the player in his first season with the Knicks than the All-NBA forward fans are accustomed to seeing from last year. Over his last five games, he is only averaging 13.2 points per game while shooting 32.4% from the field.

The backcourt of Kemba Walker and Evan Fournier has drastically cooled off from their scorching hot start as well. Over the last five games, they have combined to average 19.2 points per game between the two of them while shooting 42.2% from the floor. These struggles have played a significant role in the Knicks’ recent inability to get the starting unit into a good groove. Could tonight finally be when head coach Tom Thibodeau makes a change to inject some energy into the starting lineup?

The Bulls have been playing very well to start the season, to the tune of an 11-5 record placing them third in the Eastern Conference. The additions of DeMar DeRozan, Lonzo Ball, Alex Caruso, and Nikola Vucevic have made an immediate impact on the court. The new acquisitions are accounting for a whopping 60 points per game, with star Zach LaVine leading the way with 26.8. Not only have these additions helped improve the offense, but Caruso has proved to be just as valuable on the defensive end. He is currently among the leaders in steals per game this season averaging 2.4, placing him tied in second only behind Chris Paul. It appears that the Bulls are a legit threat in the Eastern Conference with their new-look roster.

The Bulls are a very balanced team this year with DeRozan and LaVine both averaging over 26 points per game. While they both can put the ball in the basket at a high rate, RJ Barrett slowing down Lavine might be the most impactful matchup to keep an eye on in tonight’s contest. Barrett was working hard the previous matchup to limit the looks LaVine was receiving, and he still finished with 25 points on 7-of-17 shooting from the floor. If Barrett can boast a similar performance tonight, the Knicks will have the best chance at escaping Chicago with a W.

Mitchell Robinson left last night’s game after taking a hit to the mouth, leaving more time at center for Nerlens Noel, who also took a hit to the face, but stayed in the game. Noel returned at home last night against the Rockets following a four-game absence due to a knee injury. He posted 29 minutes as veteran Taj Gibson missed yesterday’s game.

Tonight’s game will be on MSG Network and NBC Sports Chicago, tip-off at 8 p.m. ET.

The bigs are banged up. Mitchell Robinson is out with concussion protocol and Taj Gibson is questionable, per The Athletic’s Fred Katz. Noel, who played the entire fourth quarter last night, will get the lion share of the minutes at center and the expectation is two-way rookie Jericho Sims will see time, too.