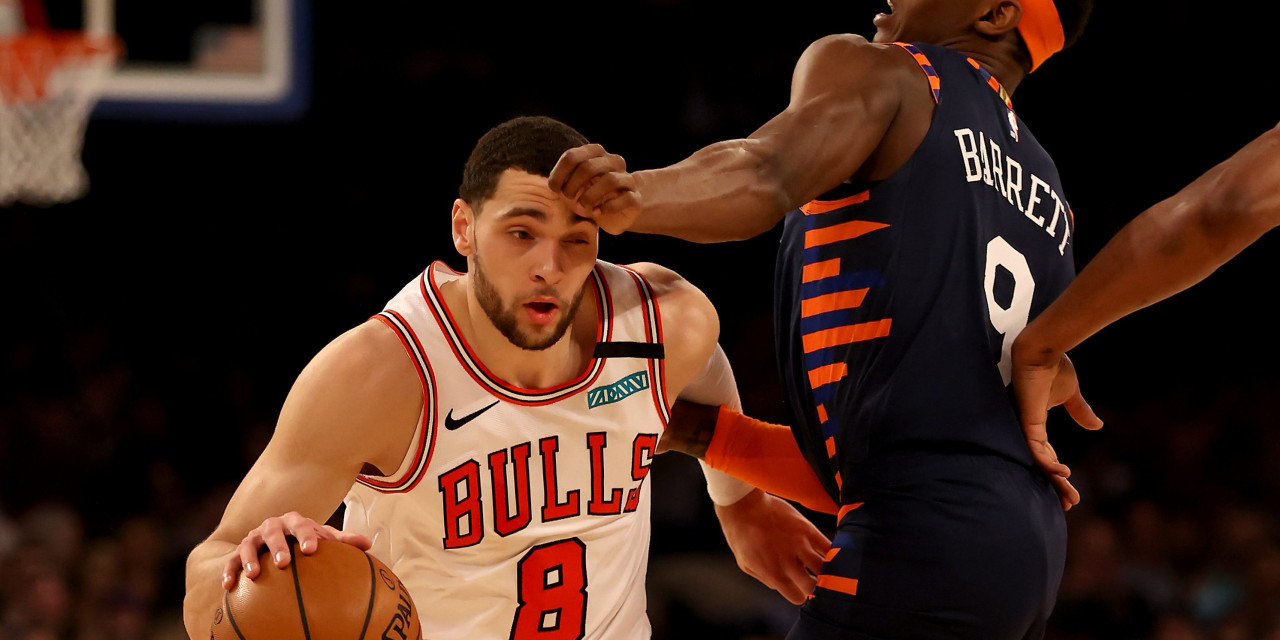 Following a complete win over the Sixers in New York on Tuesday, the Knicks travel to Chicago to face one of the last undefeated teams in the league, the Bulls.

Tonight, the New York Knicks (3-1) take on the Chicago Bulls (4-0) at the United Center in Chicago. The Knicks are looking to continue to build off the momentum from their commanding 112-99 win over the Sixers at the Garden on Tuesday.

The Bulls come in tonight off a close win versus the Raptors on Monday. The new-look Bulls are gelling well together to start the season with four of their top five scorers so far being acquired this offseason. The notable additions of DeMar DeRozan, Nikola Vucevic, and Lonzo Ball have provided a much-needed scoring spark and balance to help Zach LaVine. DeRozan has been in a good groove to start the season averaging 22.5 points a game. The improved Bulls will be a good measuring stick to see where the Knicks are at early in the season.

The Knicks come into the game playing very well offensively. As a team, they are averaging 118.8 points per game, which places them second in the league at this moment. A big reason why they are so improved offensively is their ability to shoot the three-pointer. As a team, they have led the league by hitting 70 three-pointers through the first four games. Not only have they made the second-most threes as a team, but they are shooting at a 38.0% clip while doing it. This is the seventh-best percentage in the NBA. All of these improvements should not come as a huge surprise, though, as it has come off the back of the offseason additions Kemba Walker and Evan Fournier. As a tandem, they are averaging a combined 31.5 points a game while shooting 48.3% from behind the arc. Compared to last season, the backcourt of Elfrid Payton and Reggie Bullock posted an average of 21.0 points per game while shooting 38.5% from three. If Walker and Fournier continue to play consistently, it should unlock new levels for this Knicks offense.

A key matchup to watch tonight will be RJ Barrett versus Zach LaVine.

LaVine has started the season right where he left off last year, averaging 25.5 points per game. Barrett has shown tremendous improvement defensively to start the season and is embracing the role of guarding the opposing team’s best player.

This was great defense on Tatum by RJ pic.twitter.com/hHkCFY6kkj

Kemba Walker had his best game as a Knick against the Sixers on Tuesday. Walker scored 19 points in 28 minutes, energizing the offense and providing a scoring threat from the point guard position that the Knicks have been missing for what feels like 10 years. The Knicks finally have a point guard.

Head coach Tom Thibodeau said on Tuesday before the game versus the Sixers that Nerlens Noel is close to being ready to make his season debut after battling some hamstring tightness and knee soreness. On Thursday, Thibodeau announced that Noel is out but could be available for Saturday’s New Orleans Pelicans matchup.

According to The Athletic’s Shams Charania, Zach LaVine has been diagnosed with a small ligament tear in the thumb of his non-shooting hand but intends to play through the injury. His status on Thursday will come down to his pain tolerance and, as of now, LaVine intends to play.

Tonight’s game tips off at 8 p.m. EST on MSG Network and NBATV.