Knicks Travel Home to Face Pacers, Searching for Answers on Both Sides of the Ball 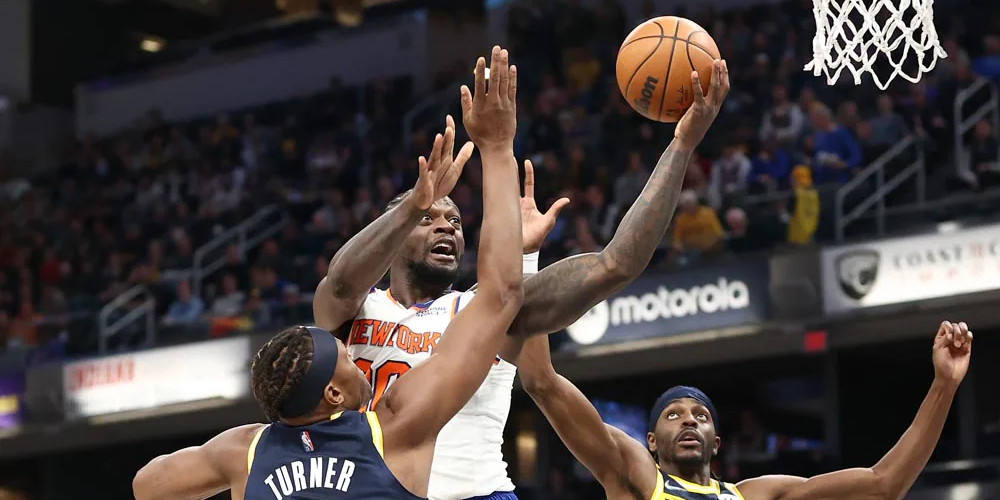 The Knicks start a three-game homestand with the opportunity presented to correct their course after a recent downswing.

The New York Knicks (7-6) host the Indiana Pacers (6-8) at the start of a sizable home-game stretch; five of New York’s next six games will be at Madison Square Garden. The Knicks and Pacers have faced off already this season with the Pacers claiming a 111-98 victory on November 3rd.

The last time New York and Indiana played, the Pacers knocked down 39% of their threes (16-of-41 from the outside), led by Myles Turner’s 25 points and seven made threes. New York fell to 5-3 that night, but the inconsistencies on defense and struggles on offense—something that has plagued the Knicks this season—were apparent that night.

Losers of five of their last seven games, New York is veering closer and closer to altering their approach. The defense has been woeful (25th in defensive efficiency), while the offense has been great (fifth in offensive efficiency). Most of the issues trace back to their starters, as the slow start from the group of Kemba Walker, Evan Fournier, RJ Barrett, Julius Randle, and Mitchell Robinson has placed the Knicks in a tough bind.

Some have turned to Barrett and Randle as the issue, but New York will have to look around to find solutions around that. Kemba Walker’s slow start has raised eyebrows, while Obi Toppin’s recent play has suggested that maybe Tom Thibodeau should ditch the “always have a defensive-minded center on the floor” mantra. In New York’s effort in fixing the offense this offseason, it seems like they might’ve broken the defense. It’s still early, but New York has some work to do.

Meanwhile, the Pacers are the baby Knicks? This game does have a “two Spider-Men pointing at each other” feel. Indiana sits sixth in offensive efficiency and 21st in defensive efficiency, led by a defensive-minded coach who has pushed for his team to take more threes this season and spurred on by their talented big man (who also had a breakthrough 2020–21 season) in Domantas Sabonis (18.3 points, 11.3 rebounds, and 3.9 assists.). Even though the Pacers sit under .500, they’ve made positive changes for their future.

Even more Knicks-y, the Pacers live on good coaching and sneaky good depth. Often tough on point guards, Rick Carlisle has done a good job getting the most out of both Malcolm Brogdon (team-leading 22.0 points per game) and T.J. McConnell (10.4 points and 5.6 assists). The starting wings of Caris LeVert (16.3 points), rookie Chris Duarte (14.3 points, 40.3% from three)

The Pacers live on good coaching and depth, where Malcolm Brogdon (team-leading 22.0 points per game), Caris LeVert (16.3 points), and rookie Chris Duarte (14.3 points, 40.3% from three) assist in anchoring a strong Pacers offense. Former Knicks trade target Myles Turner (14.6 points, 8.1 rebounds, 3.4 blocks) continues to be an effective defensive force. All in all, the Pacers are an undervalued team in the Eastern Conference that could both beat most teams in the East and remain teetering in the play-in spot, thanks to the depth in the conference.

Duarte remains a game-time decision with an ankle injury, but this will be a battle between two talented and healthy teams.

#RotationWatch2021: While Tom Thibodeau has yet to hint at changes in the rotation, the Knicks feel ready for some testing. This feels like a game where we see more Derrick Rose minutes, maybe some Quentin Grimes or, let’s get crazy, a potential “Immanuel Quickley with the starters” looks.

More Bench Minutes: Amidst the rotation shuffle, I’m curious to see if New York’s reserves get more minutes in this one. Rose, due to his recent play, should get more time with the starters. Not only that but seeing what Immanuel Quickley looks like as the lead guard with Julius Randle and RJ Barrett, as well as Obi Toppin and Randle playing together in the frontcourt would also be beneficial. Even in spurts, it’s time to see what Thibodeau is thinking to help turn this around.

Julius Randle vs. Domantas Sabonis: Last season, Randle did well against Sabonis and the Pacers, averaging 19.0 points, 10.0 rebounds, and 7.7 assists against them last season. For a player off to a slow start, Randle getting a familiar foe he succeeded against the previous season, perhaps this could be where he gets back on track.

The Pacers wings against New York’s defense: An underrated group, Indiana’s wing group of Brogdon, LeVert, Duarte, Torrey Craig, Jeremy Lamb, and Justin Holiday is a strong group that could give New York fits from the outside. That constant pressure from Indiana’s wings could create a tough night for both New York’s perimeter defense and the Mitchell Robinson-Nerlens Noel duo on the inside.

Knicks-Pacers tips at 7:30 p.m. ET and will be aired on MSG Network and Bally Sports Indiana.