Knicks Travel to Windy City to Take on Bulls 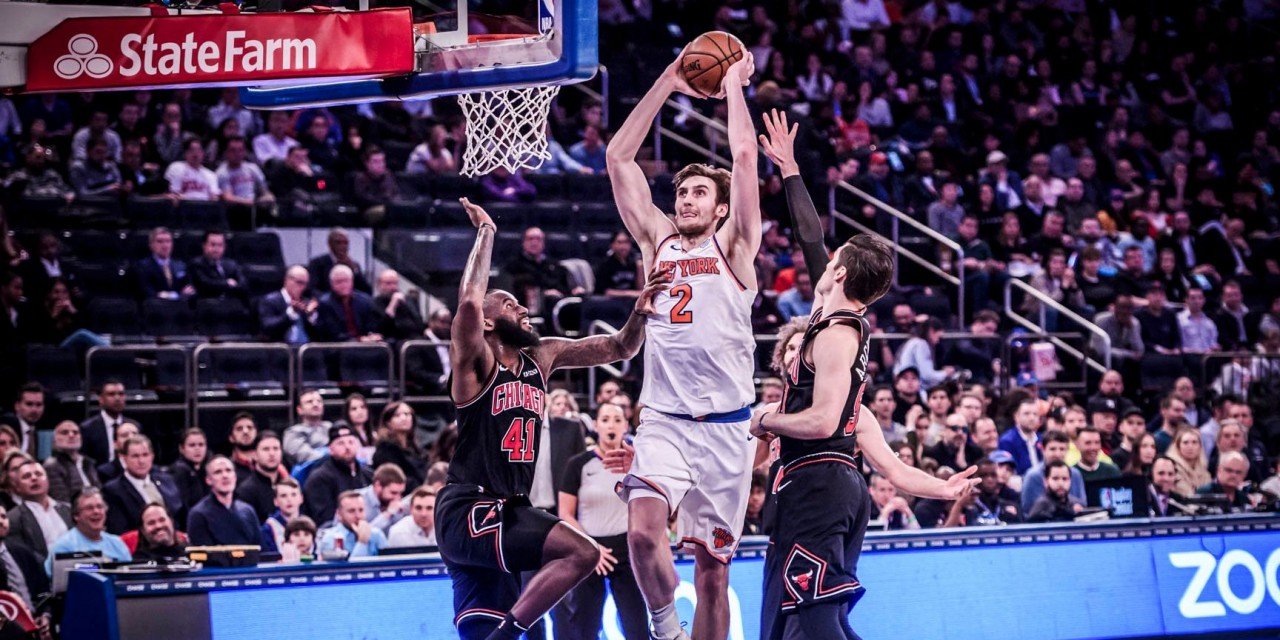 With a chance to build a winning streak at the end of the season, the New York Knicks are set to take on the equally hapless Chicago Bulls.

One consequence of the NBA’s newly reformed draft lottery system is that late-season games don’t matter as much anymore.

For now, though, New York (16-64) visits Chicago, going up against the Bulls (22-58) and their roster chock full o’ question marks. New York’s roster is no better, really, as it currently has six players on the injury list. With no remaining point guards on the roster, Coach David Fizdale has been forced to play Mario Hezonja at the lead guard spot—a bold concept that’s actually paid some dividends.

Chicago as a team is in the bottom half of the league in every major statistic—27th in points per game, 25th in rebounds, 27th in assists, and 20th in points allowed.

At one point through the game, the Bulls cut a 28-point lead down to five. The Knicks managed to hold on behind the efforts of Luke Kornet, Kevin Knox, Damyean Dotson, and Mitchell Robinson. New York as a team shot 50% from the field, hit 18 threes on 47.4% shooting, and got to the line 25 times.

If New York has any hopes of winning tonight’s game, it’ll need help from these players below.

Robinson continues to solidify his reputation around the league as a potentially game-changing player. In his last 10 games, Robinson has averaged 10.9 points, 10.8 rebounds, and 2.8 blocks in 28.1 minutes. Shooting 72.1% from the field in that span, Robinson is shooting at a clip behind only Rudy Gobert among qualified players, according to the NBA.

He’s second in the NBA in blocks per game, behind only Myles Turner by a mere decimal point, and ahead of none other than the former DPOY and current-DPOY candidate, Gobert.

In the Knicks’ last matchup with the Bulls, Robinson played 33 minutes and stuffed the stat sheet with 14 points, 10 rebounds, four assists, and three blocks. Most notably, however, is Robinson’s improving ability to not foul, with just three in the game mentioned above. If Mitch can repeat this type of performance against a veteran in Robin Lopez, the Knicks might stand a chance to win another game.

Essentially the only two-guard left on the roster, Fizdale has given Dotson significant minutes and a green light since the [redacted] trade. Over his last 10 games, Dot has gone cold and been not great in this span. And by not great, I mean below average.

Three and D are two areas in which the Knicks need Dotson to excel if they want to win, and if he wants to remain as the starting two guard for New York next season. In their last matchup against the Bulls on April Fool’s Day, Dotson produced fantastic results and filled up the stat sheet. A rebound game is in order for him.

Kevin Knox is 19, and his youth and inexperience certainly has shown this season, but he is finishing up his rookie campaign and the 2018–19 season on a high note.

Sure, he’s been a terrible player in certain parts of the season, but his last 10 games give reason to be optimistic about the second-youngest player in the NBA.

In the last 10 games, Knox has been averaging nearly 33 minutes, 16.3 points, 4.7 rebounds, and 1.5 assists per game while hitting 41.3% from the field and 35.6% from deep. Nothing too impressive, but as the season closes it’s nice to know that Knox’s rookie wall was real, and he is capable of overcoming terrible play.

Against the Bulls eight days ago, Knox played 40 minutes and scored 19 points on 6-of-15 shooting. He snagged nine rebounds and assisted on three plays. His uptick in aggression and driving to the lane rather than settling for a contested three is encouraging. Facing off against Chicago tonight, Knox will have an opportunity to put together another solid outing.

Tonight’s game is scheduled to tip off at 8 p.m. ET.