Knicks Travel to Utah to Face Jazz Without Rudy Gobert 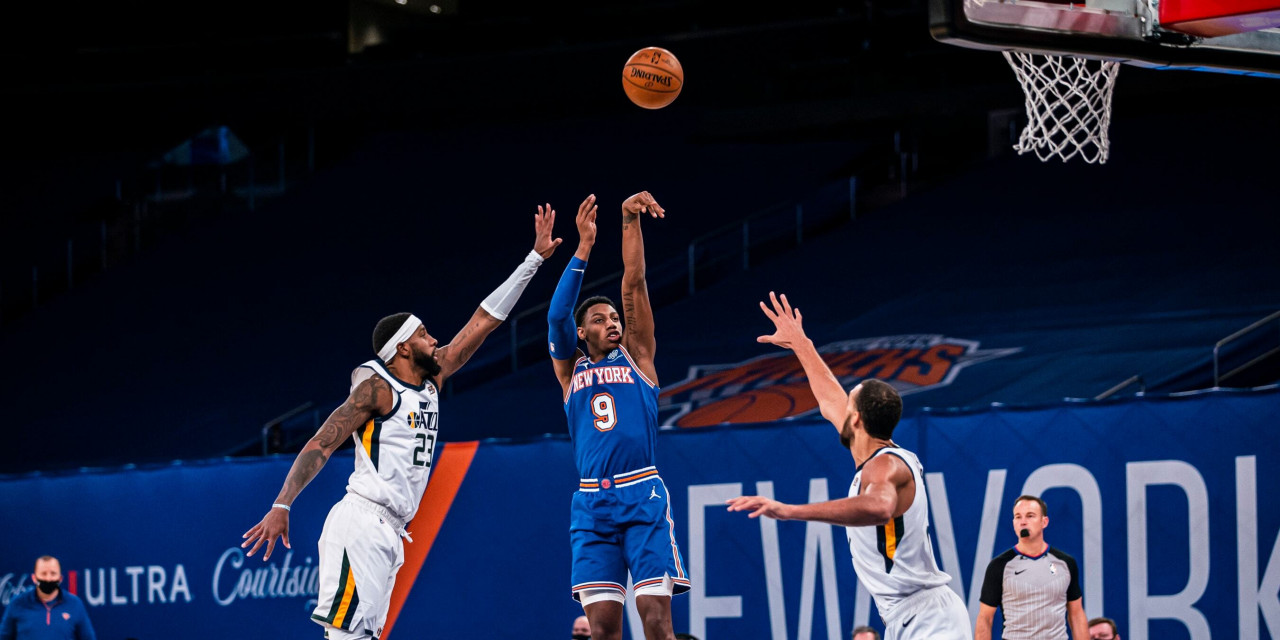 Following a crushing loss against the Lakers on Saturday, the Knicks will play a Jazz team that’s lost seven of their last 10 contests.

The New York Knicks (24-29) continue their Western Conference road trip tonight in Utah against the Jazz (32-21).

The Knicks are coming off an overtime defeat against the Los Angeles Lakers, where they once lead by 21 points. New York is now loser of two straight while winning a measly two of their last 10 games. On the bright side, RJ Barrett continued his ascension into stardom with 36 points, a poster dunk on Anthony Davis and Russell Westbrook, and the game-tying three-pointer. Julius Randle, too, added 30 points in his best overall effort in weeks.

The overtime loss was tough, but the Lakers are a different team when LeBron James is healthy, and so are the Utah Jazz without their reigning Defensive Player of the Year, Rudy Gobert. The Frenchman is expected to miss tonight’s contest with a left calf strain. Rudy Gay and Jordan Clarkson are each listed as questionable. The only Knick unavailable for tonight is Derrick Rose, who is still recovering from surgery.

The Jazz, much like the Knicks, are on quite the cold streak themselves. They’re now winners of two straight and have seen their star Donovan Mitchell return to the lineup. Due to the plethora of injuries they’ve faced, though, Utah has a 4-11 record in their last 15 games. Without Gobert, this team isn’t functionally the same. He’s everything to their offense and defense with his screen setting, his rim running, and rim presence. How can the Knicks exploit this to get the pivotal win on the road?

First of all, shout out RJ Barrett, man. His performance against the Lakers was the most impressive of his young career. The confidence he is playing with right now is contagious. Ever since his game-winning three against the Celtics, he’s been the best player on this team. The eye test makes you think Tom Thibodeau is seeing this, too. New York has begun to run the offense through Barrett more than ever, and it’s because he deserves it. Julius Randle is having a disappointing year after his spectacular 2020–21 season, but when Barrett is taking the pressure off Randle while drawing the harder matchup, the Knicks are at their best. In his last 15 games, Barrett is averaging 22.3 points and 6.0 rebounds while shooting 42.5% from the field and 39.6% from three.

Against the Lakers, Barrett was being guarded primarily by LeBron James and was getting to the rim while finishing over Anthony Davis with an array of moves. He was getting to his spots and making tough shots from the perimeter all night, as well. This trend could easily continue tonight against Utah. The Jazz have a great defense, but it’s because of Gobert. Without his presence in the paint, this team funnels points in the paint. They don’t have many defense stoppers on the perimeter, so ball-handlers and motion offense can really exploit this team.

Running spread pick-and-roll with Barrett and Randle as the creators could be New York’s best offense tonight if the role players can hit their shots at a decent percentage.

PRIZEPICKS OF THE NIGHT

The Knicks Wall’s exclusive partnership with PrizePicks presents the picks of the night. Tonight, we’re going with RJ Barrett following his career night in L.A. We’re hitting “over” on Barrett’s projected 29.5 combined points, rebounds, and assists. Joining Barrett is Jazz All-Star guard and tri-state native Donovan Mitchell, whose points, rebounds, and assists combination is projected at 33.5. Another “over” selection.

At this point, it’s just become laughable at Tom Thibodeau’s reluctance to take Kemba Walker out of the starting lineup when he was quick to pull him from the rotation two months ago. Kemba Walker is a New York basketball legend and was once a flat-out star in the NBA, but the Kemba experience has to end. He physically isn’t capable of what he was during his prime due to a lingering knee injury. The team is reportedly shopping the veteran point guard, so unless this is just a ploy to increase his trade value before the deadline, it’s actively hurting the team. Walker is out tonight, via Newsday‘s Steve Popper, resting ahead of the back-to-back.

The point guard position in general is hurting the Knicks. Walker has struggled—so has backup Immanuel Quickley—Derrick Rose is out with injury, and Alec Burks is playing out of position. This could be why the Knicks are looking to upgrade at point guard at the trade deadline. If they’re unsuccessful in doing so, surrounding Barrett and Randle with three-point shooters and defenders has to be the plan to start and close games until Rose returns. Quickley has his games where he flashes while showing his true potential, and that’s exciting, but, we’ve also seen his questionable decision-making late in games, serving as a reminder he’s still so early in his career. Barrett and Randle provide enough shot creation and playmaking that a point guard doesn’t have to be on the court if it’s hurting the team.

Quentin Grimes and Obi Toppin especially have showcased more than enough to crack a significant role nightly in the rotation, and it sure would be nice to see what former Hawks forward Cam Reddish can provide since a first-round draft pick was traded for him.

After tonight, New York continues their western road trip against the reigning Most Valuable Player Nikola Jokic and the Denver Nuggets.

»READ: The Knicks must do something at the trade deadline