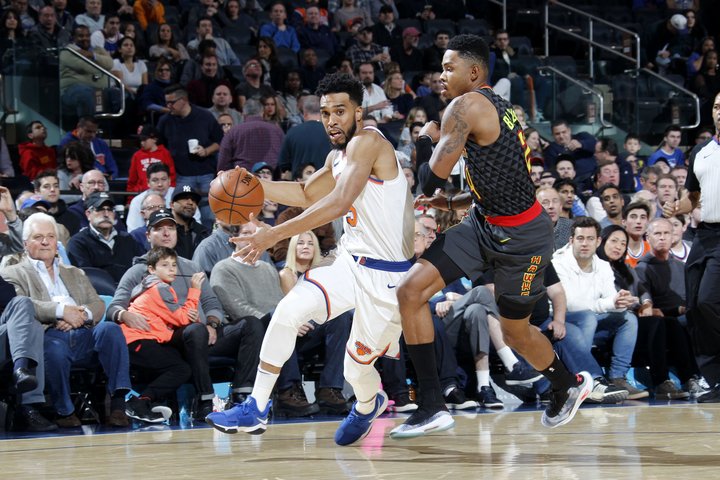 On the second half of a back-to-back, the Knicks came out on top over the Hawks on Sunday night at Madison Square Garden.

Following a frustrating two point loss after a rabid comeback attempt in Chicago, the Knicks headed back to MSG to take on the 6-19 Atlanta Hawks on Sunday night, to whom they lost earlier this season.

The Knicks came out rejuvenated tonight in a tight back-and-forth contest in which the Knicks held on for a hard-fought 111-107 win to bring the team back to .500 at 13-13.

Marco Bellineli missed an open three for the tie with under a minute left, followed by a mid-range dagger from Jarrett Jack to put the Knicks up five with just over 30 seconds to go. Frank Ntilikina, Jack, and Kristaps Porzingis sealed the deal with free throws in the final 13 seconds to hold onto the lead:

The Knicks did a great job of securing the ball tonight, with just 12 turnovers, compared to their season average of 16.2. This was especially impressive given that the Hawks are third in the league in forcing turnovers on 16.7 percent of opponents’ possessions.

In the final frame, it was encouraging to see Ntilikina aggressively looking for his shot. He scored 8 points, all in the fourth quarter, to go along with his 3 steals to lift his team to a win. He was +11 on the night.

Jarrett Jack was stupendous all game, dropping a season high 19 points on 7-of-11 shooting from the field. He easily sliced through the Hawks interior, which was missing some size with Dewayne Dedmon, John Collins, and Mike Muscala out.

Dennis Schroeder, who dropped 26 points and eight assists the last time these two teams matched up, gave Jack some fits before he got into foul trouble and headed to the bench early in the third. Schroeder was bothered by Ntilikina’s length when they were matched up. Ntilikina denied his forays into the paint, often using his body to stay in front of him and forcing him into some tough shots.

Enes Kanter suffered a hip injury last night against the Bulls, but was back in the starting lineup tonight after walking out of the United Center on crutches. Bothered by that hip, his play was uninspired, especially on the defensive end where he missed a lot of rotations.

Speaking of missed rotations, those mistakes were the main stories on the defensive end here. The Hawks were getting open three-point looks all night, as they shot 31 threes compared to just 17 for the Knicks. Ersan Ilyasova torched them from behind the arc, knocking down five from range. The rest of the Hawks team couldn’t make the Knicks pay, shooting just 16 percent from behind the line.

Doug McDermott continued his impressive stretch of play, looking sharp with his off-ball movement and shooting. He scored a season high 23 points on 9-for-13 from the field:

Kristaps Porzingis made his impact felt with a strong 30 point and eight board game tonight. Six minutes had elapsed in this contest before KP’s first shot of the game—he didn’t force his looks like he may have early on in the Chicago game. He let the game come to him, but still shot 10-of-23 on the night. He made the turnaround jumpers in the post look easy all night:

KP with another turnaround jumper. Automatic.

Next up, the Knicks take on the youthful Lakers at MSG on Tuesday.

• Kristaps has been getting stripped by double teams as he turns middle. He needs to work on recognizing when a double is likely to come and anticipating it. He did a better job of this in the second half.

How many times have we seen this? Porzingis tries to take advantage of mismatch in the post, and liberal help off Jack gets him (turns into corner three) pic.twitter.com/7Aap41iK39

• Ron Baker played 31 minutes tonight and was the first guard off the bench. He got a couple of buckets and nice assists in the first half and made some big hustle plays in the second. I like that Hornacek is giving all his guards a shot after the Tim Hardaway Jr. injury.

• Kyle O’Quinn and McDermott continue to develop some nice rapport, as O’Quinn found him twice under the basket on backdoor cuts. O’Quinn finished the night tied with a team-high four assists.

• Michael Beasley fouled out in just ten minutes of play tonight. He is the first Knick this season to foul out of a game.