Knicks Triumph over Mavericks at MSG 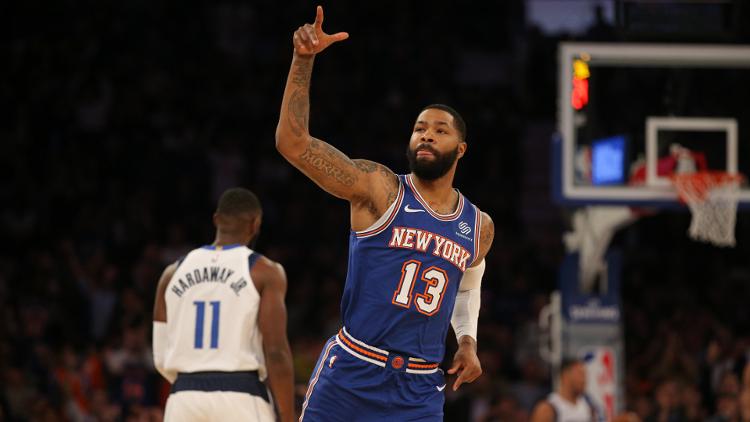 A strong team performance marked New York’s third win of the season, and second against Kristaps Porzingis and the Mavericks.
Emotions (mostly anger and scorn) ran high in former Knick Kristaps Porzingis’ return to Madison Square Garden for the first time since being traded to the Dallas Mavericks. The Knicks matched the crowd’s energy en route to winning 106-103.

Porzingis, who last played in the Garden on February, 6th 2018, felt the heat in his first game back. The defense on him was physical. The Garden crowd ferociously booed him whenever he touched the ball, occasionally breaking out “KP sucks!” chants.

The Knicks came out diving for loose balls and playing stout defense. They led for most of the game, leading by as much as 10 in the third quarter. A three-pointer from former Knick Tim Hardaway Jr. gave Dallas a one-point lead with six minutes left in the game; it was their first lead since the first quarter.

From there, the teams exchanged buckets down the stretch. The Knicks tried staying in front, but the Mavericks were able to tie it up multiple times. The score was brought to a tie at 101 with 22.7 seconds remaining.

The game-deciding play came down to a jump ball between Julius Randle and Delon Wright. Randle tipped it to Marcus Morris, who squared up and drained a three with 13.2 seconds remaining.

A layup from Luka Doncic brought the deficit to one point, but two free throws from Frank Ntilikina iced the game, giving New York their third victory on the season and their second win against Dallas.

New York was terrific from behind the arc, connecting on 13 of their 30 three-point attempts, a clip of 43.3%. They also hit 81.8% of their free throws, marking the first time this season the team shot over 80% from the charity stripe.

The Knicks tried multiple defensive schemes throughout the game. They continued to switch everything when playing man-to-man, which occasionally created mismatches for Dallas. New York also utilized zone defense, though Dallas was able to beat it with good ball movement.

Behind the viscious on-ball pressure provided by Ntilikina, the Knicks tightened up in crunch time, though, allowing just 16 points in the fourth quarter.

Julius Randle got off to a hot start, recording eight points on 4-7 shooting in the first quarter. He played much more controlled and finished with 17 points, 10 rebounds, and three assists, while also committing six turnovers and playing poor defense. Marcus Morris started off poorly but finished with a team-high 20 points, five rebounds.

Meanwhile, Luka Doncic torched the Knicks just as he did in their prior meeting. Doncic finished with 33 points, 11 assists, 10 rebounds, and three steals. He penetrated the Knicks defense constantly, drawing foul after foul on his way to converting 10 of his 13 free throw attempts.

The Mavericks also got good performances from Dwight Powell, who finished with 12 points and four rebounds, and Delon Wright, whose defense was menacing throughout the contest.

Knicks fans made it clear that they were not happy to see Porzingis return to MSG. The boos started to rain down as Dallas took the court, started back up when Porzingis was introduced, and continued throughout the game.

Many, many, many loud boos as Kristaps Porzingis introduced as part of the Mavericks for the first time at MSG. Porzingis smiles as his name is introduced ahead of his return game against the Knicks. pic.twitter.com/UsBfJwhWRW

Porzingis missed his first four field goals of the game. His first bucket from the field was a putback layup in the second quarter. He finished with 20 points on 7-17 shooting from the field and 1-5 from three-point range.

Surprisingly, Porzingis was very effective on the glass. Despite being a weak rebounder for his size, he reeled in 11 boards, his second-highest total this season. Four of those were offensive rebounds, which is the most he’s had this season. Porzingis also contested the rim well, recording three blocked shots.

the boys bounce back

The Knicks got terrific performances from two youngsters coming off multiple game absences.

Mitchell Robinson returned after missing the last three games due to a concussion. He came off the bench and tallied 14 points and seven rebounds in the first half, finishing with 16 points and eight rebounds in 22 minutes. In typical Robinson fashion, he fouled out, boosted New York’s defense when on the court, and threw down multiple lobs.

After a horribly rough start to the season for Dennis Smith Jr., he bounced back tremendously. Smith’s performance was undoubtedly his best of the season by a couple of landslides.

He was the first substitution, along with Mitchell Robinson, and assisted him on a dunk in their first possession. Smith and Robinson connected twice more, for alley-oops, in the first half.

For the first time this season, Smith let the game come to him. He stayed controlled and dictated the offense well, looking to drive and finding open teammates when he didn’t have an open shot. He also shot 2-4 on three-pointers and finished with 13 points, a team-high eight assists, six rebounds, just two turnovers, and this putback dunk.

DENNIS WITH THE DREAMVILLE DROP IN FOR THE PUTBACK pic.twitter.com/3Z7faCol7c

The ‘Bockers are back in action Saturday night against the Charlotte Hornets.