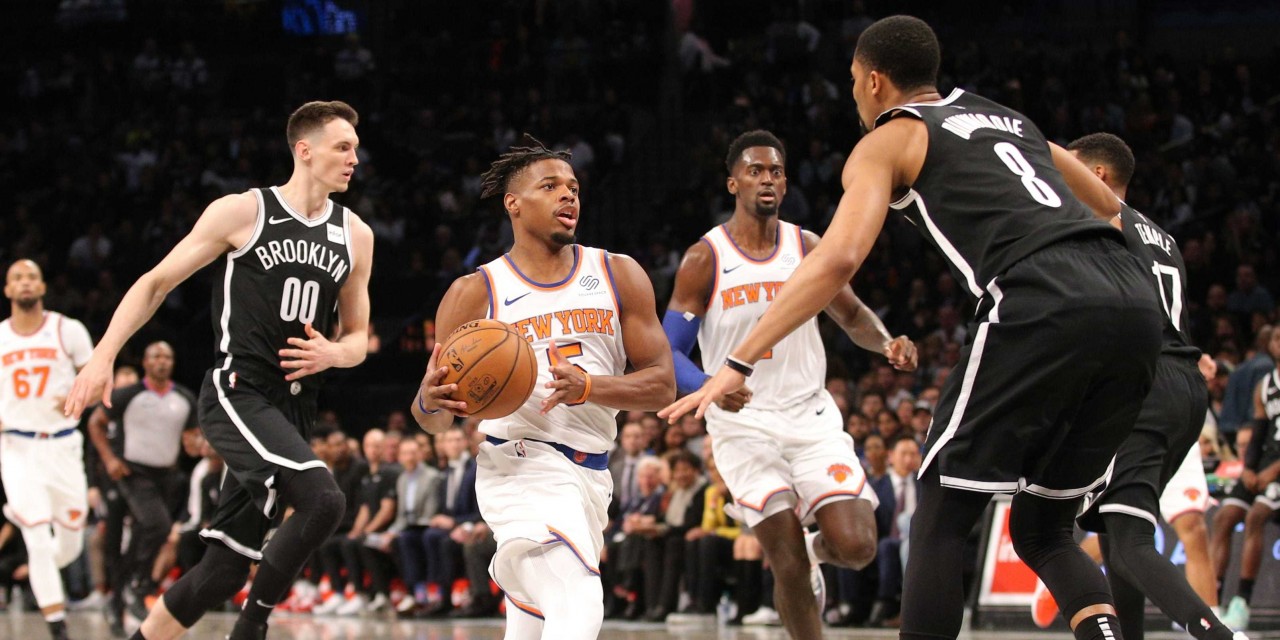 The Knicks play again on Sunday against the Nets, who are without Kyrie Irving, after dropping a stinker against the Spurs last night.

For one fan base, it’s the “rivalry” battle for New York, believing that another win against the orange and blue would be enough to snatch the title of “New York’s team.” For the other, it’s just another opponent on the schedule.

To everyone else on the outside looking in, it’s probably going to be disappointing.

The first edition of “Knicks vs. Nets” ended in dramatics and intrigue, with the Knicks hanging on tight with their neighboring foe, until Kyrie Irving hit the game-winner. It was only the second game of the season, and the Knicks flashed some solid potential despite the inability to close out late.

Since then, the Knicks have shown some difficulty in closing out but have also shown their trademark late-game rally that falls just short of its mark. The Knicks (4-12) are coming off back-to-back losses to Philadelphia and San Antonio. Both of those performances are the most recent  examples.

As for the Nets (7-8), the “New York takeover” has yet to happen, with Brooklyn hovering just below .500. However, the Nets do come in with back-to-back victories against Charlotte and Sacramento.

Irving won’t be around this time, as he nurses a shoulder injury that will keep him sidelined for the next few Brooklyn games. He’s been absent for just over a week, and the Nets have gone 3-1 while he’s been off the court.

Spencer Dinwiddie has stepped into the starting role, and he has filled in admirably. He’s cashed in four-straight 20-point performances, shooting approximately 45% overall on the floor. Dinwiddie is also averaging 6.7 assists and 1.5 steals during this stretch.

Jarrett Allen is also elevating his play as of late, averaging a double-double over the last four games with 13.8 points and 11.3 boards. Although the Nets don’t look to him often, he’s been highly efficient, shooting 70% throughout the month of November.

Lastly, keep an eye on Joe Harris. He is a streaky shooter but is dangerous when he heats up. He tied a season-high 22-point performance in the Nets’ previous win over Sacramento, where he hit 5-of-7 shots from long range.

Frank Ntilikina didn’t get to play against the Brooklyn Nets the last time around, as he was still in David Fizdale’s doghouse.

Since point guard absences gave Ntilikina a chance to play—because Fizdale had no other choice—Ntilikina has played his way into the rotation. He’s averaged over 31 minutes per game this month, and it’s clear that his defensive ability and playmaking provide a boost to the team. If he’s able to pour in some points, that’s an added bonus.

The Knicks could have used his defense in their previous meeting with the Nets, and now he’ll get a chance to take them on in front of the home crowd. He impressed against the Spurs, piling up six steals. He also had nine assists without any turnovers.

Irving won’t be playing, but it would’ve been fun to see him take that defensive assignment. Regardless, he’ll get his first go against the Nets this season.

He was still very much new to the team and Fizdale’s system, so it’s understandable that Marcus Morris hit a bit of a rough patch early on. Against Brooklyn, he had just 11 points on 3-of-9 shooting through 33 minutes of action.

Since then, it’s clear that Morris has emerged as a leader on and off the court. Morris is currently the Knicks’ leading scorer, and provides a voice in the locker room. It’s always encouraging to see a newcomer buy into being a part of a new organization, even if things haven’t exactly been going smoothly. He’s gotten himself going. In five of New York’s last six games, Morris hit the 20-point mark. Throughout the month of November, he’s shooting 50% from three-point range.

Expect a better performance against the Nets, as he tries to continue his solid play offensively.