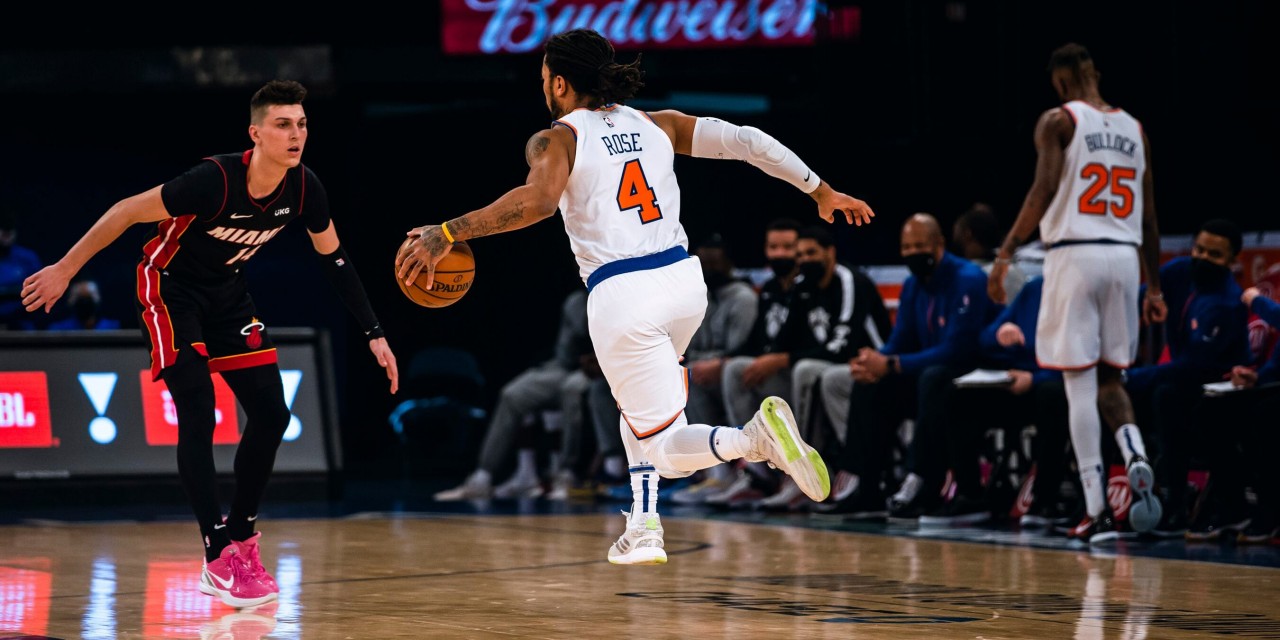 Jimmy Butler carved up the Knicks on Monday in New York, snapping the ‘Bockers’ four-game winning streak and bringing them back down to Earth.

For Walt Frazier’s 76th birthday, the New York Knicks (24-23) had the chance to extend their winning streak to four games, which would’ve been the biggest of the season. Hopefully, “Clyde” is okay with his team not delivering a birthday W, as the Knicks fell to the Miami Heat (23-24) by a score of 98-88.

The matchup concluded the Knicks’ season series with the Heat, which provided a trilogy of low-scoring affairs that Miami won in the end. For two hard-nosed teams with a history of being bitter rivals, it’s extremely fitting. This game, like the prior two, featured plenty of intense defense and tenacity levels that matched that of a playoff game. Unlike the first two contests, though, this one was decided well before the final buzzer.

Right out of the gate, the Heat threw double teams at the Knicks’ lead ball-handler each possession, which flustered the ‘Bockers and resulted in New York missing their first eight shots. Julius Randle and Elfrid Payton helped the Knicks find momentum on offense while R.J. Barrett provided some excellent defense. Neither team found much success on offense, though, as the first quarter concluded with a 21-16 score in favor of Miami.

Bam Adebayo tormented New York on both ends of the floor. His swarming defense set the tone. He grabbed seven boards and blocked two shots in the first half while. Barrett set a similar tone for the Knicks, harassing the players he guarded.

Immanuel Quickley provided an offensive spark off the bench, tallying seven points in five minutes. The bench as a whole propelled the Knicks, scoring 31 of the Knicks’ first 43 points and scoring 16 consecutive points in the second quarter to swing the lead in New York’s favor. Despite Randle providing little impact, the Knicks found themselves up 43-36 at the half. No player on either side recorded double-digit points.

IQ off the glass 🔥 pic.twitter.com/DSktJYwkfd

The defensive intensity continued into the second half, though it didn’t help the Knicks prevent the Heat from finding their way into the paint, which led to a flurry of scoring opportunities. Miami scored 11 points in three and a half minutes—all of which Jimmy Butler was responsible for—and brought the game to a tie.

Butler couldn’t be denied by anyone. Several different Knicks tried their hands at stopping the five-time All-Star, but he always found a way to get a bucket. He tallied 15 points in the third quarter, which almost doubled his first-hand count. Randle scored seven points of his own, but it couldn’t help New York keep pace with the onslaught of scoring Miami put together.

The Heat got red hot in the third quarter, extending the lead to 11 as the fourth quarter began. Miami scored 39 points in the third quarter—more than they scored in the prior two quarters combined. They went on a 25-14 run over the last eight minutes of the quarter after the score was knotted at 50 apiece.

Miami carried its efficient scoring into the final frame and New York couldn’t muster up enough juice to come back. Just like the Bucks did in New York’s last game, the Heat deployed a zone defense and the Knicks couldn’t solve it. With this win, the Heat snapped a six-game losing streak.

Randle led the way for the Knicks with 22 points and eight rebounds. Derrick Rose put up 16 points and three three-pointers and Quickley added 12 points of his own.

The early goings of this game could have put the center rotation in critically bad shape. Nerlens Noel exited the game in the first quarter holding his shoulder and had it looked at on the sideline. Gibson replaced him and picked up three fouls before the midway point of the second quarter. Adebayo nearly had a double-double at that point.

Fortunately, Noel returned to the game and played a wonderful game. He was an absolute menace in the paint, swatting shots and deterring others simply with his presence near the hoop. Noel ended the night with eight points, 11 rebounds, and four blocks.

NOEL WITH THE SLAM😤 pic.twitter.com/PqNHAXBVGv

When Robinson went down with his first injury of the season, Noel stepped up and, in Robinson’s words, held it down. His performance tonight was just another night at the office, and the Knicks will need him to keep it up as the playoffs draw closer.

The Obi Toppin highlights are far and few between. It seems appropriate, though, to showcase perhaps his best play of the season: a confident take to the hoop with a defender on his hip and a fearsome defender lurking close by. It’s unfortunate that this is where we’re at with the 23-year-old rookie drafted eighth overall, but this bucket is still an impressive one.

New York will return to action on Wednesday at 8 p.m. ET when they’ll pay a visit to Minnesota for a matchup against the Timberwolves.