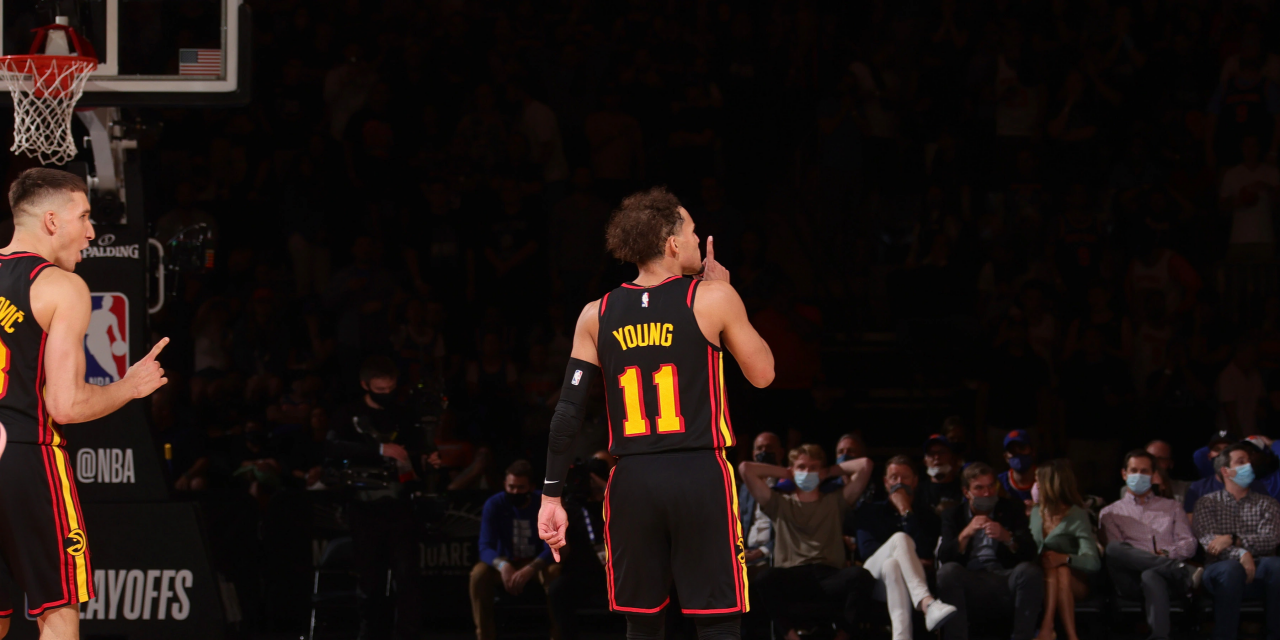 Despite the immediate impact Hawks star Trae Young has made on the series, the Knicks are not letting his antics get to them.

NEW YORK, NY — On Sunday night, Trae Young quickly added his name to the list of prime New York Knicks playoff enemies like Reggie Miller with one simple moment. After hitting the game-winning bucket for the Hawks with 0.9 seconds remaining in game one, he shushed the crowd that had been rooting (and shouting obscenities) against him all night.

Trae Young with 32-10-7 and a game winner in a hostile road environment in his playoff debut.

Do y’all realize what we just witnessed??? pic.twitter.com/9MAKj4zY0G

After the game, Young was quickly dubbed the villain of New York. The 22-year-old poured in 32 points and 10 assists in that game and looked rather comfortable doing so. His big shush has been acknowledged in the days since, as the game was an early highlight of the playoffs. And while it may have gotten under some people’s skin, the Knicks don’t appear to be bothered by it.

“The league got so soft, but that’s basketball,” said Derrick Rose after today’s shootaround about Young. “His reaction is supposed to be that way and he’s supposed to amp up and bring the atmosphere of the environment to where it is right now.”

Rose, in his ninth career playoff appearance, went on to speak about how he’s seen far worse in his experience and is excited for the environment this type of basketball creates.

Rose continues to be a catalyst for this Knicks team, having secured 17 points, five rebounds and five assists in 38 minutes played in the Game 1 loss.

One player who struggled in that game, Reggie Bullock, doesn’t see this as a reason for them to be deterred looking at the rest of the series. In Sunday’s contest, Bullock recorded just six points and went 0-for-5 from three-point range.

“Obviously, I didn’t see any of my three balls go down, but that doesn’t stop me from shooting in the series,” said Bullock after Wednesday’s shootaround. “I know how great a shooter I am, I just have to go back and look at the shots that I was missing and try to correct.”

When asked about Trae Young and if his impact on game one has bothered them, Bullock said, “I’m really not even worried about, you know, what Trae’s got going on or what people are saying about him. I’m just locked in on my team.”

Going into Game 2, the Knicks are fortunate to have Nerlens Noel return to the starting lineup after leaving Sunday’s game with an ankle injury. Coach Tom Thibodeau confirmed that as long as Noel made it through pregame warmups feeling fine, he should return to the lineup with no issues.

Thibodeau also spoke before the game on whether the Knicks would do anything to switch up their rotation. One thing that won’t be changing is the starting lineup, as Elfrid Payton will remain the team’s starting point guard despite only playing eight minutes in Game 1.

“It’s a two-point game, it comes down to a loose ball,“ said Thibodeau. “We’re going to use everyone.”

Thibodeau was also asked about Young and how he feels about the villainous role he’s taken on in the series, which he feels comes naturally with the intensity of postseason play.

“In general, I think your players understand the intensity of the playoffs,” said Thibodeau. “Playoff basketball has an intensity to it just because you’re playing the same opponent over and over again.”

Regardless of the environment tonight, the Knicks will have to find a way to stop Young to secure a home win to tie the series at 1-1 before heading to Atlanta for game three. Fingers crossed for no more shushing.