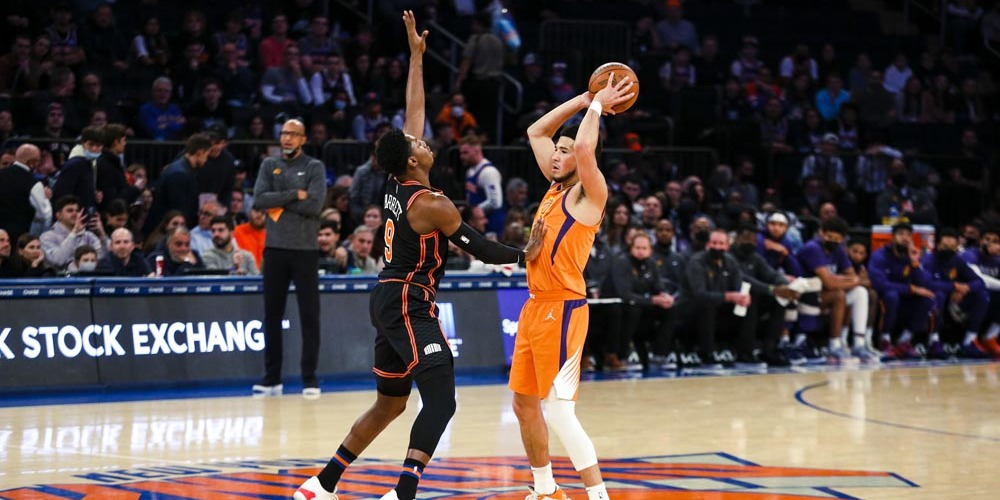 The Knicks were on the receiving end of a clinical performance from Devin Booker and the torching Suns, seeing them walk away with their 15th straight victory.

The New York Knicks (10-9) were no match against the NBA’s hottest team, falling on a score of 118-97 to the Phoenix Suns (16-3). The Suns’ third-ranked defense (103.8 DefRtg) had New York in all sorts, seeing them unable to post a competitive score while being outdone by Phoenix’s All-Star backcourt of Chris Paul and Devin Booker (combined 46 points, 10 assists).

The Knicks again came out scorching shooting the ball, led Evan Fournier’s continued resurgence (3-for-3 from deep, nine points) while Mitchell Robinson made his presence felt upon return from a two-game absence, contributing four second-chance points from a pair of offensive rebounds.

Evan is hot to start 🔥 pic.twitter.com/9bQUIVHWsK

New York failed to take care of the ball early, turning it over six times through one frame while defensively struggling to contain Phoenix’s pick-and-roll duo of Chris Paul and Deandre Ayton while RJ Barrett was outdone by Devin Booker, who led the Suns with 11 points on 5-for-9 from the field.

New York’s second unit again couldn’t bridge the gap Derrick Rose left, getting only seven bench points in the first half. However, they were able defensively to stem some of the bleeding, conceding seven points through six minutes of second-quarter action.

The ‘Bockers offense stalled in the second period, struggling to generate quality attempts against Phoenix’s league-best defense. The Knicks’ overall shooting dropped to 37.8% overall and 26.7% from long distance by halftime, while New York’s left-handed duo failed to find a rhythm. Barrett and Julius Randle both went 2-for-4 from the floor and 0-for-1 on three-pointers for six points each.

Tom Thibodeau had no answer for Devin Booker, who picked up where he left on in the first, adding a further 10 points on 5-for-8 shooting to take his tally to 21 by the main break, propelling Phoenix to a 57-44 lead.

Struggling point guard Kemba Walker had a strong third quarter for the second time in three games, penetrating for a layup and a trip to the charity stripe in conjunction with a pair of three pointers for 10 points in the period alone. He was the only source of offense for New York as Randle was more aggressive to begin the second half but was ineffective (1-for-4 FG, two turnovers), while Barrett’s struggles continued (1-for-6 FG, 1-for-2 FT).

The Knicks were lackadaisical defensively in the third term, losing Booker on multiple transition plays resulting in a pair of threes in addition to his scintillating halfcourt play for a further 11 points in the period, totalling 32  points for the night, a game-high.

It was a frustrating 12 minutes for the ‘Bockers, with Phoenix countering every New York run, keeping their lead in the mid-teens throughout the quarter. The frustration was exemplified when Landry Shamet hit a three pointer with 19 on the shot-clock after a Knicks made basket, giving Phoenix a comfortable 17-point cushion to end the third.

Phoenix was in cruise control much of the fourth period, with reserve guard Cameron Payne carving up New York’s Swiss Cheese defense, leading to free throw attempts for Shamet and an open three for Cameron Johnson.

Immanuel Quickley tried to ignite his team with 11 quick points on 4-for-6 shooting, including three from long distance, but again it was a singular effort as Obi Toppin’s hot stretch came to end, culminating in a 2-for-9, 0-for-3 from three outing.

The Knicks found the range in the final frame, connecting on five threes, but the Suns continued about their business, systematically picking New York apart and preserving their lead.

Tonight’s game was a fair litmus test to see where the Knicks stand in the overall landscape. They were thoroughly outplayed by a top-tier opponent on both ends, perhaps outlining New York’s status as a third-tier team.

The Suns have won 15 consecutive games for a reason and New York couldn’t sustain continuity offensively, plodding their way to 97 points against a gold-standard defense. The Knicks were undone by Phoenix’s point guard play, unable to contain Paul or Payne (16 assists between them, New York had 13 total) off the dribble which resulted in uncontested three point looks (13-for-28 3PT).

It is difficult to read much into tonight’s game. New York was outplayed by a better team, who has been on a tear and exhibited tremendous cohesion. The Knicks suffered much of the issues which have plagued them through the first 18 games being long stretches of futility offensively partnered with continued defensive lapses, especially in transition (17 fast-break points to 10).

The Knicks will need to have a short memory as they will head to the airport and make the trip to face last year’s playoff opponent, the Atlanta Hawks, at State Farm Arena tomorrow night.