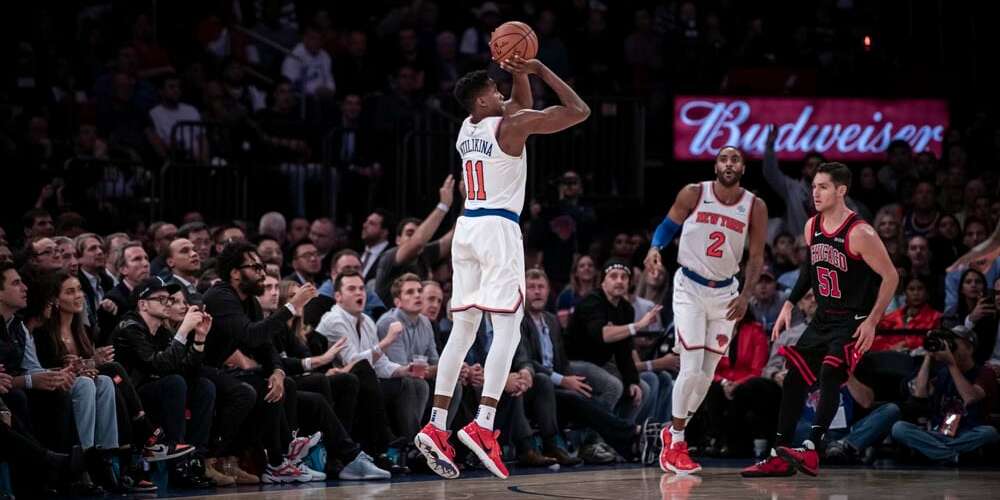 With the Knicks in the headlines for the wrong reasons, the team still has a game to play, with Tuesday’s matchup pitting them against the Bulls.

The New York Knicks (2-8) travel to the Windy City Tuesday evening, looking to pick up their third win of the season and second against a Chicago Bulls (3-7) team keeping the Knicks company in the basement of the NBA standings.

In their first matchup of the season in late October, the Knicks were victorious in comeback fashion by a score of 105-98. The Knicks trailed by 18 after the first quarter but clawed their way back in what was known as the “Bobby Portis game” in which the former Bull torched his old squad with 28 points.

Since that evening, the Knicks have not only gone 1-5, but have managed to embarrass themselves both on the court and off the court. With their non-competitive brand of basketball being the early season theme, reports have surfaced that Scott Perry and Steve Mills have “laid the groundwork” for head coach David Fizdale to be fired. Fizdale denies knowing this and says he keeps in constant communication with the front office, but clearly there is growing frustration among all parties involved in this debacle of a Knicks season.

The Bulls find themselves in a similar situation as the Knicks, frustrated and disappointed with their inauspicious start. Coach Jim Boylen has been the subject of criticism and has been questioned if he is equipped to bring the Bulls back to the promise land, while their best player Zach LaVine’s frustration has been mounting over numerous ugly losses recently.

Chicago will be without Otto Porter and potentially Wendell Carter Jr. tonight as they look to take advantage of a Knicks team in turmoil. Despite the Bulls record, rookie Coby White has been impressive thus far, LaVine and Lauri Markkanen are great young talents, and Kris Dunn finds himself third in the NBA in steals with 2.2.

Fiz and his players look to ignore the early season awkward firestorm that has dominated headlines over the past few days and get a much needed road win against the Bulls.

For the first time in his brief Knicks career, Barrett has hit the skids a little bit, scoring only 12 points combined in his last two games, per ESPN Stats. After a torrid first eight games, the rookie has come back down to earth and looks to get back on track against the Bulls, who he put up 19 points and 15 rebounds against the first time.

With Wendell Carter Jr. possibly out tonight, R.J. has the potential to really exploit a weakness in the Bulls’ defense, as they rank 19th in the NBA in opponents points in the paint, per NBA Stats.

With Elfrid Payton out again tonight, and Dennis Smith Jr. made available but slowly returning to action, anticipate a lot of Frank Ntlikina at the point guard position. Ntilikina was horrendous in 22 minutes in his last game against the Bulls, scoring zero points.

Dennis Smith Jr. is available to play tonight for the Knicks in Chicago. Fizdale won't commit to a starting lineup yet but says the one from Sunday is most likely.

Ntilikina has been what we all expected while filling in for the missing point guards; a plus defensively but super unreliable and mostly anemic offensively. If the Knicks want any chance of winning tonight, they will have to get decent production out of the 21-year-old. In their last win against the Mavericks, Ntilikina scored 14 points and was efficient from the field on top of his good defense. Hopefully he can at least replicate that performance tonight while the Knicks try and stay afloat at the point guard position with both Payton and Smith not at 100%.

With Mitchell Robinson out for tonight’s game with a head injury, it will be interesting to see if Julius Randle steps up and is able to play more freely. It has been a rough beginning for these two on the court together, as they haven’t quite looked as comfortable on the floor together as we would have hoped.

Their spacing has looked messy; Robinson and Randle have yet to gel together and seem to be more awkward than fluid. It is a small sample size, but Knicks fans have high expectations for these two, and so far, it has been disappointing.

Randle is averaging 20.5 points and 12.0 rebounds in the last two games without Robinson, and he looks to build on his good performances with the second-year center out again.

Going forward, seeing Randle and Robinson learn to coexist and grow together will be an interesting storyline to follow