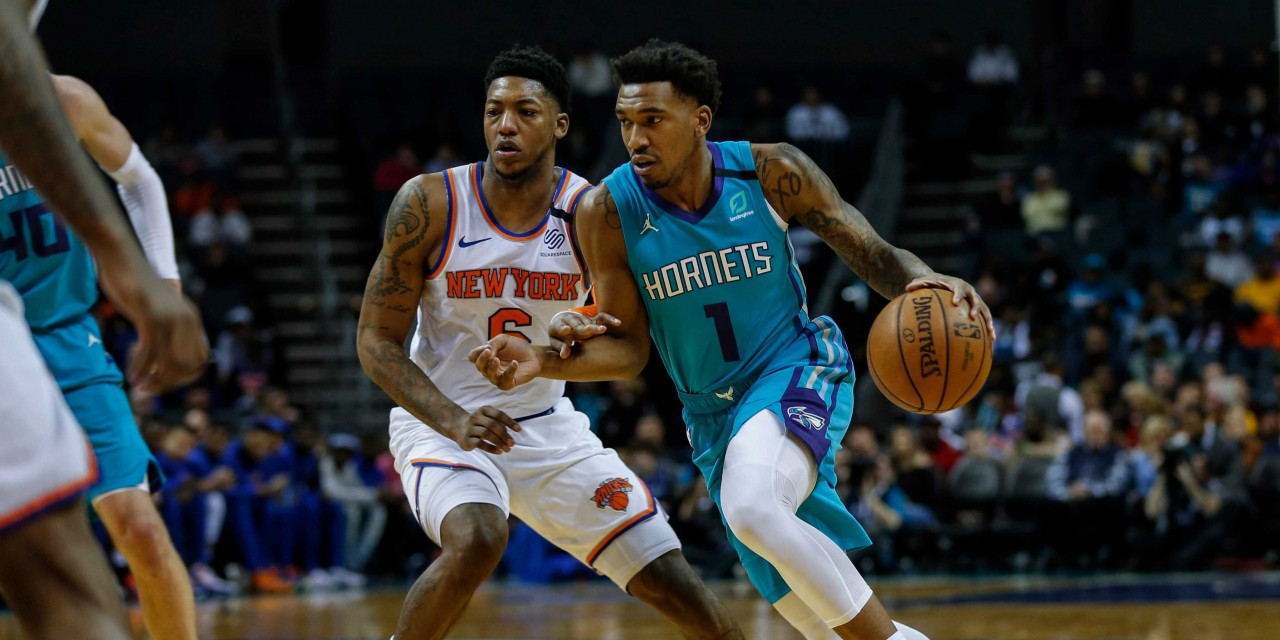 The Knicks are trying to earn something more than losses after a string of nice performances for younger players with a win in Charlotte.

The New York Knicks (17-40) enter tonight’s contest against the Charlotte Hornets (19-38) with an 0-2 record since returning from the All-Star break.

The Hornets are coming off of a 119-80 blowout loss last night at Indiana where their best player, Devonte’ Graham, was active but did not play. Malik Monk started in his place. You could assume it was because the team is in a back-to-back scenario. He should be ready to start for Charlotte tonight at home.

The Hornets may have their starting point guard back, but for New York that position has been quite the experience this year. Since returning to play, interim head coach Mike Miller has started two different point guards in both of their games against the Indiana Pacers and the Houston Rockets—Frank Ntilikina and Dennis Smith Jr. Elfrid Payton, who established himself in that role for a run there, has been out with a sore right ankle.

If neither Ntilikina or Payton are good to go tonight, expect Dennis Smith Jr. to get the start again. He’s coming off of arguably his best performance this year putting up a monster stat line of 15 points, seven rebounds, five assists, and seven(!!!) steals in 30 minutes. It came in a loss, but it was his most complete game this season. At the very least, it was encouraging to see signs of life from Smith as this season on and off the court for him as been a challenge. Let’s see if he can keep up this momentum.

The Hornets and Knicks have been disastrous organizations for a while now, and for just about the same reasons. It’s actually quite funny how similar the reasons for these teams demise are.

Both owners, Michael Jordan and James Dolan, are questionable at best and have caught a lot of flak throughout the years for putting people who they have friendships with into front office jobs. For both franchises, these people have not gotten the job done. Lots of high money/long-term contracts have been given out to players that are past their heyday or flat out just didn’t deserve that money.

Both teams had a star-caliber player (Kemba Walker and Carmelo Anthony) that they failed and pushed out the door. Both teams despite years in the lottery have yet to strike gold on a prospect, but we’ll see how Graham, Robinson, and Barrett turn out. There’s more that parallel’s these teams in the last 10 years, but even this year on the court they’re producing almost identically.

According to NBA Stats, in terms of Offensive Rating (ORtg) and Defensive Rating (DRtg), Charlotte ranks 28th and 26th with a -8.2 Net Rating. New York ranks 29th and 21st, respectively, with a -7.1 NetRtg. They’re both in the bottom eight of the league for pace and three-point percentage as well. These stats aren’t the end all be all, but if you watch these teams you know they can’t score, can’t defend, can’t win games, and are just bad for a lot of the same reasons.

Since the ‘Bockers have returned to play, we’ve seen some strong play from the team’s young core. R.J. Barrett, the Knicks’ third overall pick in the 2019 draft, is averaging 19 points, 5.0 rebounds, and 2.5 assists per game on 44.4% shooting from the field. He shot 0-for-5 from three against the Pacers, but 2-of-5 (40%) against the Rockets on Monday. In the game against Indiana he had a few plays against former All-Defensive guard Victor Oladipo that were draw dropping. His feel for the game has continued to improve throughout the season.

Frank Ntilikina had a 14-point game in his start against the Pacers and added two steals and two threes in that game; Smith had his monster game against Houston. Mitchell Robinson had been also off to a good start averaging 9.0 points, 8.0 rebounds, and 3.5 blocks per game since the All-Star break.

Coming up against a very poor Charlotte team on the second night of a back to back, these young players should be ready to continue their strong play. Defensively, the Hornets guards are atrocious and Cody Zeller isn’t scaring anybody in the paint either. Maybe some more DSJ to Mitch oops?

The Knicks head to Philadelphia tomorrow to take on the struggling Sixers on the road, and then the Chicago Bulls at home on Saturday. Time to stop the bleeding the get a win, or three, during this stretch.