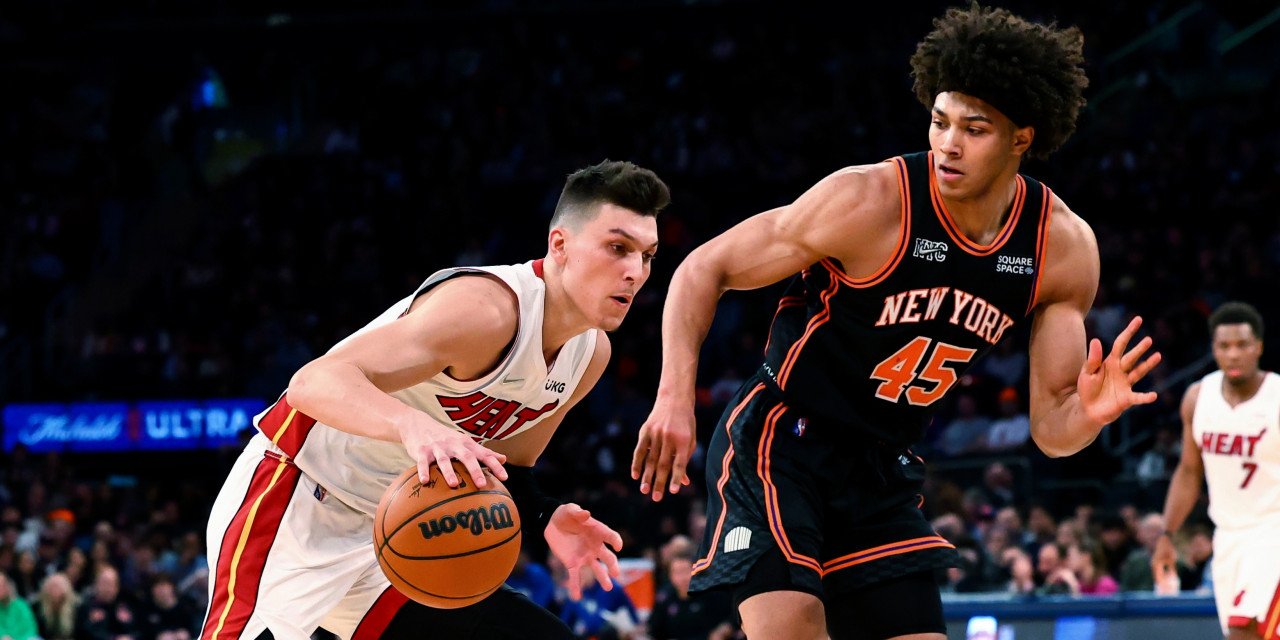 The Knicks match up on the road against the Heat, a playoff-caliber opponent who is experiencing some turbulence as of late, including a viral, intrasquad sidelines blow-up the other night.

The New York Knicks (31-42) take their talents down to South Beach this evening to square off against the Eastern Conference-leading Miami Heat (47-26). Tonight marks the third and final matchup between these two teams, with the Heat winning the two previous matchups by a combined 29 points.

Miami has been scuffling as of late, losers of two straight games, and currently have the Milwaukee Bucks right on their tails, as they sit one game ahead with nine games remaining on their schedule. Things got heated the other night in Miami’s 118-104 loss to the Warriors when Jimmy Butler and coach Erik Spoelstra exchanged words on the bench. Butler had to be restrained from Spoelstra and veteran big man Udonis Haslem, who had some choice words for Butler.

Jimmy Butler was HEATED in the Miami huddle after the Warriors went on a big run to start the second half pic.twitter.com/6waBmHlL1r

Despite the most recent dust-up, the Heat arguably are the best coached team in the NBA and have an incredibly deep roster with veteran leadership and young, ascending talent. Miami’s two top scorers, Tyler Herro at 20.9 points per game and Butler at 21.2 points per game, are questionable tonight with injuries. Butler is nursing a sprained ankle while Herro is dealing with a knee sprain.

Herro has scored 20-plus points and made at least three three-pointers in both games against the Knicks this season, per ESPN Stats. Regardless of Butler and Herro’s availability, the Heat are still loaded with talent including Bam Adebayo and Kyle Lowry.

Former All-Star Victor Oladipo has made his way back as well from a knee injury but will not suit up tonight against the Knicks.

Star in the Making

A month ago to the date, RJ Barrett exploded against the Heat, to the tune of 46 points. Since Barrett’s career night, he has scored at least 18 points in each game since, per ESPN Stats. The 21-year-old seems to be finally turning a corner in his third NBA season and has been the brightest aspect of an otherwise lost season for the Knicks.

Barrett has essentially taken over the number one option role from Julius Randle and has displayed an alpha attitude while doing so. Thus far in his career, Barrett has often been overlooked by more flashy and productive guys in his draft class like Zion Williamson, Ja Morant, and tonight’s opponent, Herro. Although RJ likely doesn’t speak on this, I’m sure he’s heard the noise of people anointing Herro as a better player than him and will use that as fuel this evening, especially since he is the primary offensive option.

Wednesday night, we saw Barrett lead the Knicks to a convincing victory against a tough Hornets team, so expect Barrett to be aggressive tonight and put up big numbers down in Miami.

RJ IS THAT DUDE 💪💪 pic.twitter.com/dwh4YroVm3

As mentioned previously, the Heat have been struggling as of late, while the Knicks have been playing an improved brand of ball. Both teams are 6-4 in their last 10 games, but the Knicks have averaged more points and given up fewer points compared to the Heat in that span. With Miami in sort of a lull, it will be important for the Knicks to come out with more energy and match the physicality of a team that is playing angry.

Tip-off this evening is at 8 p.m. ET on MSG Network and Bally Sports Sun.