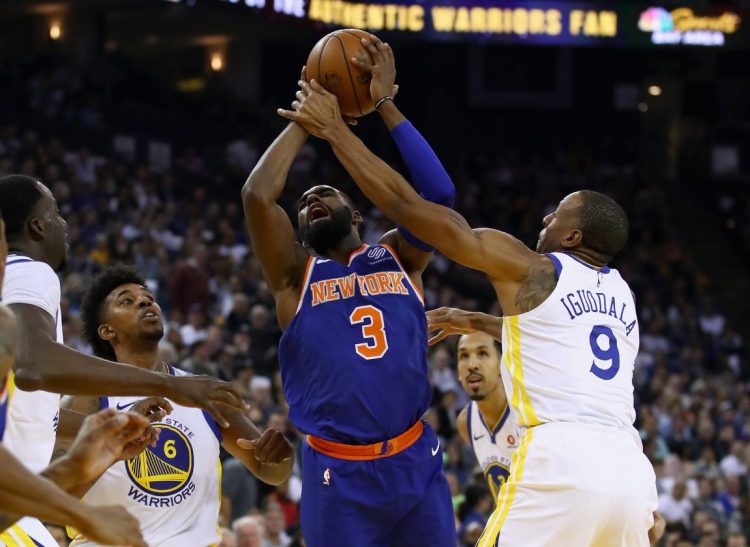 Despite leading at halftime against the class of the NBA, the Knicks struggled in the second half and chalked up another loss.

With Kristaps Porzingis missing as a rim protector, you had to expect that this specific road game with be a daunting matchup for the Knicks. Michael Beasley took his spot starting at the four. And with the Walking Bucket, this had to be a game where the Knicks committed to the “out-shoot ’em” game plan early.

The Knicks flourished in the mid-range early per usual by creating space and being quicker getting shots off against a starting five that features some of the best man-to-man defenders at their respective positions. Courtney Lee, who had stepped up impressively as a scoring option, got off to a hot start in the first half, shooting 6-for-7 and leading the team into the half with 13 points. He finished with 20 points overall.

The common thread that has been missing in these road games recently is being aggressive in drawing contact. The squad got to the charity stripe 11 times in the first half with Beasley, who is a 73 percent shooter this season, hitting all five of his attempts.

Golden State is a team that will let their opponents exhaust energy establishing an early lead offensively. While the Knicks were able to put points on the board off Warriors’ turnovers in the beginning of the game, they struggled versus the second unit. The Warriors got within two after an 8-0 run going into the locker room. Once Golden State starts firing on all cylinders, you know an L is on its way.

Despite the Splash Brothers missing a handful of wide-open threes, a slow night and a convincing lead can evaporate in the blink of an eye. The way both guards can move without the ball and can lose their man is one of the primary reasons that they’ll go down as one of the best backcourt tandems of all time.

Willy had a nice first quarter, but it’s plays like this one that have kept him on the bench this season pic.twitter.com/BR7iaBG5tP

One thing that defies logic is why the third quarter is such a problem for the Knicks. It doesn’t matter who the opponent is, the guys come out of the locker room lacking focus and tenacity. In many cases, they simply look lost or slow on defense and can’t connect offensively. Tim Hardaway Jr. only had two attempts beyond the arc in the second half. Hornacek didn’t even bother to let the faster Trey Burke see the floor until the last minute. Kristaps Porzingis’ ability as a catch-and-shoot threat out there was missed, as was the way he can affect the shots of opposing big men down low.

This wasn’t a bad loss. However, it could have been way worse had the Dubs hit all those open long balls. Next up, the Knicks take on the Nuggets, who also sport a high-volume shooting backcourt.