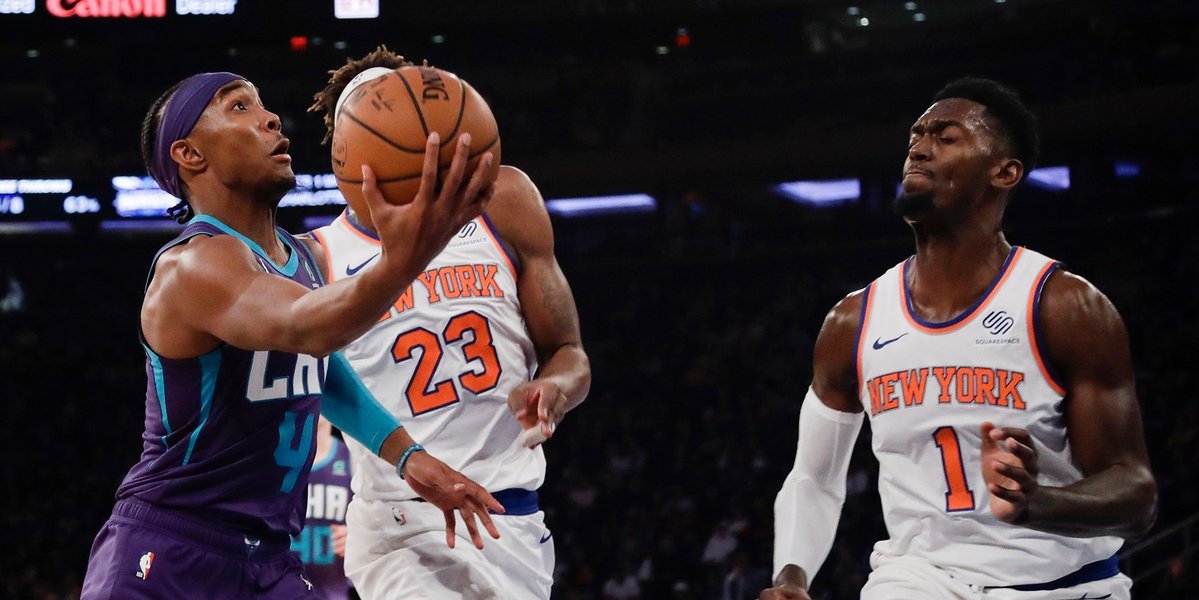 The Knicks failed to earn their first winning streak of the season, blowing a fourth quarter to the Hornets—all topped by a game-winning three-pointer by Devonte’ Graham.

Some things are simply not meant to be.

Once again the Knicks failed to capture back-to-back wins, falling to the Hornets 103-102.

Coming off another emotional win over Kristaps Porzingis and the Mavericks, all eyes were on the potential hangover. The Knicks followed their first win over the Mavs with a Sunday stinker versus the Cavaliers. How David Fizdale’s bunch would respond after an even more emotional win over Dallas would give us a peek at who they really are.

A slow start versus a Hornets team that played last night would have been a disaster. Luckily that wasn’t the case. The defense was active early, headlined by a Frank Ntilikina steal and R.J. Barrett fast break flush.

Frank with the steal, Barrett with the SLAM ? pic.twitter.com/TmuKPEzrFx

Defensive intensity remained the story of the first quarter.

It’s relatively easy to stop the Hornets—they launch three-pointers until their arms fall off, so you just have to protect the line and be ready for the long rebounds. The Knicks were able to do just that, holding Charlotte to 3-of-12 beyond the arc, which helped secure a 23-20 lead despite not shooting well on the offensive end themselves.

The second quarter was an act of attrition. Good shots were tough to come by, as both teams broke out some zone defense, daring each other to shoot over it. A late push by the Hornets, courtesy of a hot streak from deep, tightened the gap, but the Knicks preserved their lead thanks to a concerted defensive effort and great work on the boards.

Going into the break the Knicks led 55-47, and generally outplayed the Hornets in every area besides outside shooting. To take into account how much the Hornets rely on the three-ball, they shot 46 times in the first half, with 25 coming from three. The Knicks did most of their damage inside the arc out of necessity more than preference (27.3% from deep).

Out of the break the Knicks’ energy did not taper off. Barrett kicked things off with five straight points. Marcus Morris and Taj Gibson followed that with a couple points down low to push the lead back to double digits.

But once again the Hornets closed the gap with their outside shooting, virtually the only above-average facet of their game. A mix of hot shooting, poor perimeter defense by the Knicks, and zone defense led to the Hornets briefly taking the lead.

The lack of awareness to protect the three-point line compounded by the continued ineptitude on offense led to some restlessness, but the Knicks carried a one-point lead into the fourth quarter.

Zone defense by the Hornets left the Knicks befuddled to start the fourth. The Knicks did not penetrate and looked generally lost. Luckily, Mitchell Robinson’s dominance on the boards kept his team long enough for his teammates to wake up, grabbing the lead back with eight minutes to go.

When Robinson was forced out after he rolled his ankle, things tightened up once again. Devonte’ Graham continued to tantalize from outside (baffling that the Knicks never forced him inside the arc all night), before R.J. Barrett took over.

The rookie took control when the Knicks needed it most, assisted by Julius Randle, who finally had some good moments down the stretch to push the lead up to four. But as is always the case with the Knicks, the Hornets hit enough shots to win.

Graham delivered the killing blow. He torched the Knicks all night, and when he was finally defended properly by Frank Ntilikina, he still managed to drill it. It was inexcusable to let him touch the ball, and even more inexcusable to remove Barrett on the other end to attempt game winning shot.

Overall it was a solid game, but the inability to beat a one-trick pony like the Hornets, who were on the second night of a back-to-back, is not a great sign.

Next up for the Knicks are the Cavaliers coming to town on Monday night. Before I leave you, here are some quick thoughts from the night.

Story of the Night: Keeping That Same Energy

Amid the heartbreak of tonight’s loss was an encouraging sign: the Knicks came out and were locked in a full 48 minutes. They came out energetic on defense, and maintained that effort on the boards where they excelled all night. There were no lazy stretches we saw against the Kings and Cavs.

Player of the Game: Mitchell Robinson

It’s time for Mitchell Robinson to consistently start and play major minutes. He was the best Knick tonight, controlling the paint, and keeping his team alive with his work on the glass. He finished with 17 points and 12 rebounds (six offensive rebounds), to go along with one block.

Interestingly enough, he might also be the best free-throw shooter on the team at the moment.

Had the Knicks held on, this would have been the highlight of the night. Mitch rolled his ankle on the defensive end, but apparently his teammates were unaware. The center finished the play with a dunk and was given a hero’s sendoff.