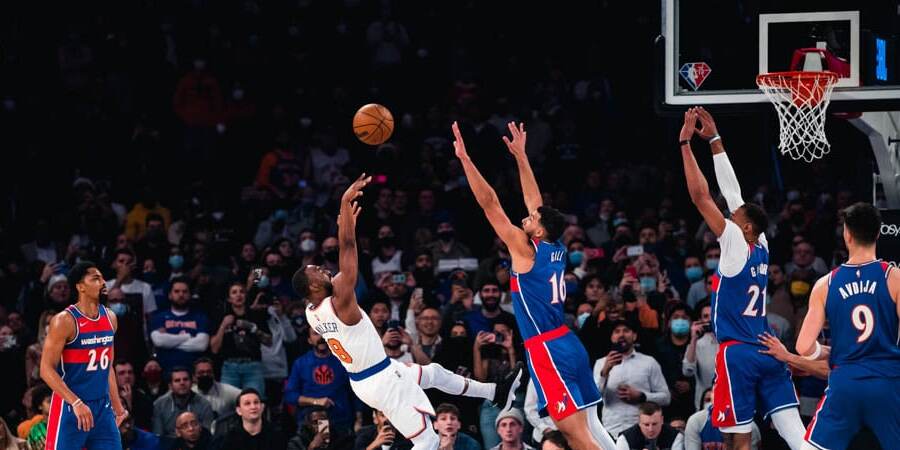 Kemba Walker lit up The Garden for 44 points, including 23 alone in the second quarter, but the Knicks’ defense broke against the Bradley Beal-less Wizards.

The New York Knicks (14-18) fell to the Washington Wizards (17-15) at Madison Square Garden on Thursday, 124-117. Washington extended its winning streak to two games while New York is back in the losing column after its victory over Detroit on Tuesday.

Kemba Walker was the leading scorer for both sides with a whopping 44 points on an efficient 14-for-27 clip. Julius Randle and Alec Burks lagged behind Walker with 23 and 20 points, respectively, and rookie Jericho Sims was impressive in his first minutes since early December, logging six points and six rebounds in 22 minutes.

Conversely, Spencer Dinwiddie led Washington in scoring with 21 points, while Aaron Holiday, Kyle Kuzma, and Corey Kispert all finished with 16 or more.

This game was another prime example of how New York’s defensive identity has waned significantly since the year prior. Washington shot 56.0% from the field on the night (42-for-75) and 43.2% from three (16-for-37), all without star Bradley Beal no less, who was a late scratch for this one, entering the NBA’s busy COVID-19 protocols.

Below are a pair of takeaways from the 48 minutes of action.

The Knicks have been ravaged by COVID-19 as much as anyone. The number of ‘Bockers sidelined has opened up playing chances for those who were end-of-the-bench guys. After dropping a combined 50 points across his last two outings, Walker again got the start, and boy did he deliver. He once again gave fans a taste of that All-Star-caliber player he was back in his Charlotte Hornets days by reaching a new season-high in scoring.

THIS MAN IS UNCONSCIOUS pic.twitter.com/V7JhULKm2i

Walker was up to 28 points on a torrid 9-for-14 shooting by halftime, 22 of which came in the second quarter. He connected on just about everything in the second, from one-footed floaters to contested layups and even some patented mid-range pull-ups. Walker’s entire night was splendid, but his second-quarter spurt stands out as the height of it. Watching him (or any NBA player, for that matter) operate in such a groove is mesmerizing, and it’s hard not to be extremely happy for the guy after all that he’s been through in his short time in New York. Remember, just a few weeks ago, he was an afterthought in the rotation. Now, he’s fresh off a 44-point performance (the most of any Knick this season) and has scored 20-plus points for the third consecutive contest.

Washington’s bench was solid. New York’s? Not so much.

The Wizards’ reserves entered tonight averaging the fifth-most bench points in the NBA (38.9). It’s worth noting that New York’s bench is a dynamic offensive unit, too, as it sat right behind Washington’s at sixth in scoring (38.7 points). But unfortunately for the Knicks, the road team decisively won the battle of the benches on Thursday.

Raul Neto with the sweet no-look, over-the-shoulder pass to Montrezl Harrell for the score 💨 pic.twitter.com/D9js7a8XYM

Montrezl Harrell, Raul Neto, and Deni Avdija spearheaded the offensive attack for the second-stringers. Starting with Harrell, he was his usual, dominant self in the painted area, tallying 15 points on 6-for-7 shooting from the field and 3-for-3 from the charity stripe. Meanwhile, Neto didn’t set the world on fire with just five points, but his impact went beyond the stat sheet; the Brazilian point guard weaved his way to the paint time and time again and generated point-blank shots for him and his teammates because of it. Last but certainly not least, Avdija chipped in 14 points (including one three-pointer) and five rebounds.

When all was said and done, the Wizards’ bench outscored New York’s to the tune of 38-14. It was a night to forget for a Knicks second unit that has been one of the few bright spots during a roller coaster season in the Big Apple.

Next up for the Knicks are the Atlanta Hawks, currently without multiple players, including All-Star Trae Young due to COVID-19 protocols. The two teams will face off at noon ET on Christmas, barring any changes to the schedule.