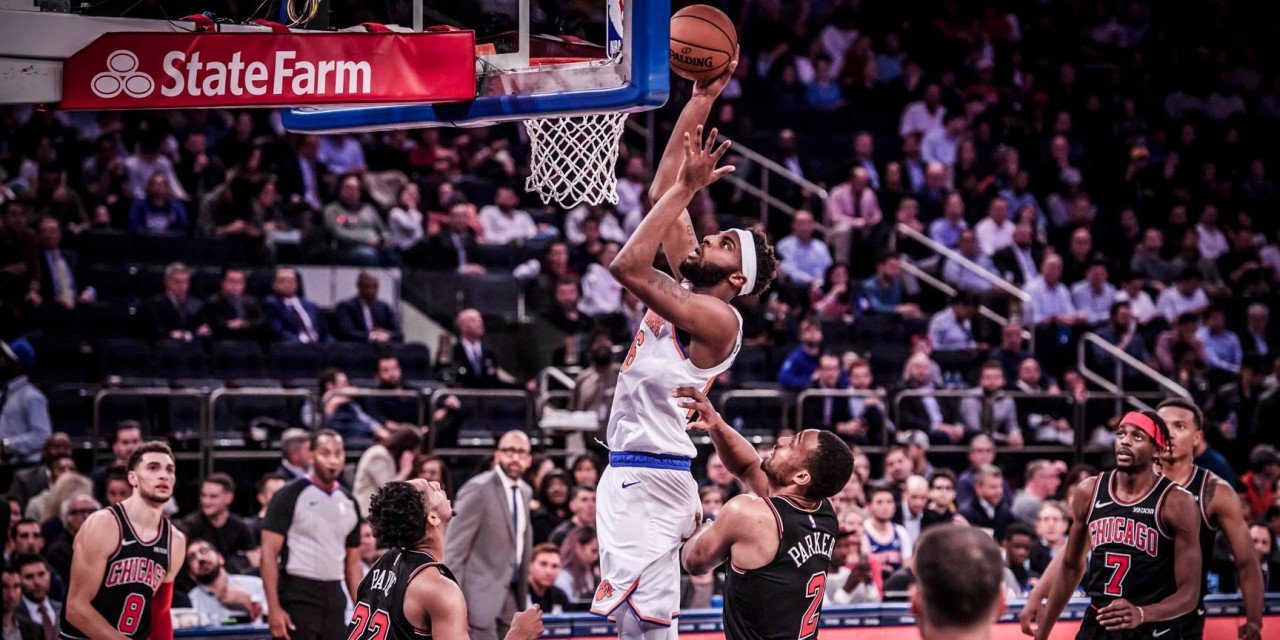 Another tanking team, the Chicago Bulls, come to MSG to face the wrath of Mitchell Robinson and the no-good Knicks on Monday night.

The NBA has decided to celebrate April Fool’s Day with a matchup between their two greatest fools—the New York Knicks (14-62) and Chicago Bulls (21-56).

I would like to thank the Bulls—specifically GarPax—for being that reliable garbage fire we can point to and say, “it really could be worse.”

New York’s matchup with the Bulls kicks off the final six games of a long, long, long, tanking journey.

Once again, both teams find themselves at the bottom of the league and the top of the lottery. With a bottom-three record locked up, next on the Knicks’ agenda is securing the worst record, limiting their potential lottery fall to fifth overall. The Bulls are currently two games “behind” the Cavaliers, of which they are well aware.

Any name of significance on the Bulls is out tonight—Lauri Markkanen, Otto Porter Jr., Zach LaVine, and Kris Dunn. Wendell Carter Jr.’s season has been over since January 15th.

Tonight is shaping up to be a rare win, which wouldn’t be the worst thing in the world. Here’s what to look for.

The Future Is Here

Mitchell Robinson has arrived in the starting lineup again, and hopefully for good. With DeAndre Jordan’s blessing, Robinson was given his first start since November. The rookie gave his coach no reason to regret the switch.

Robinson finished the night with nine points, 14 rebounds, four blocks, and three steals while matched up against Bam Adebayo and Hassan Whiteside. Tonight he gets a favorable matchup against the older Robin Lopez. While Lopez has his nights, Mitch should be in line for another strong night.

Job security is a luxury that few on this roster enjoy. Most of the Knicks’ roster is comprised of guys who will likely not be here next season. The front office has made no secret about that. Names that were once considered off limits have been dealt, and others may soon be dealt.

With that in mind, these final six games signify more than running out the clock. For guys like Emmanuel Mudiay, Noah Vonleh, Kadeem Allen, and Luke Kornet, it’s a final pitch to either stay in the fold, or show other teams what they can bring to the table.

Vonleh will most likely remain out, but Mudiay in particular has been impressive of late, averaging 20.5 points per game over his last four. He rebounded from a horrid performance against Toronto with an efficient 24 points on 50% shooting. A hot streak to end the season could help secure his future in New York or elsewhere.

It was good to see Dennis Smith Jr. on the court again. He once again played just 20 minutes, but managed to churn out 14 shots, hitting six of them for 12 points. Emmanuel Mudiay has been efficient and productive recently, and will likely continue to draw the start at the point.

Unlike Mudiay, Smith has the safety of being on the team next year. There is a reason to get excited when DSJ puts on a show, and he hasn’t put one on in a minute.

Since his 31-point explosion against the Pistons, Smith has been in a cold spell. He has averaged 12.8 points per game and shot 39.2% shooting from the field, and 28.8% from deep. The pieces are now in place for a big game from DSJ in his third outing since returning from injury, with Allonzo Trier still sidelined, and the Bulls trotting out a bunch of Joes.

This could be a nice get-right game for the guy we hope can become a main piece to this puzzle.

Dennis Smith Jr. is out due to ongoing back issues, per the team:

Dennis Smith Jr. (sore lower back) is out for tonight’s game against Chicago.