Knicks Welcome LeBron James and Lakers to His Favorite Playground 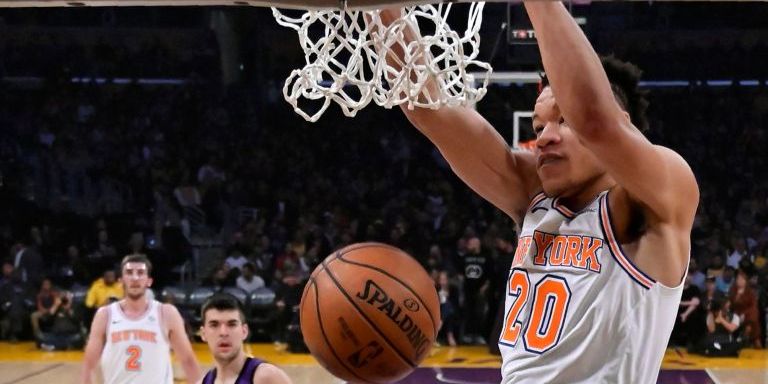 LeBron James is a go as the Lakers come to New York to face the almost equally disappointing — but for different reasons — Knicks.

The New York Knicks (13-56) welcome LeBron James and the Los Angeles Lakers (31-38) to the living legend’s favorite playground for a midday matinee.

Both teams come in 2-8 in their last 10 games. The key difference? The Lakers were supposed to be good. Year one of LeBron in L.A. is essential study material for Steve Mills and Scott Perry, who can watch first hand what not to do should they land their true king of NY this summer.

Friday night’s loss in San Antonio was brutal in every way imaginable. The team mustered a measly 83 points against the Spurs, who are not exactly known for their defense anymore. As much as one would love to see a bounce back performance against LeBron, who was a no-show on the Knicks’ City of Angels visit, another loss might not be the worst thing in the world.

There are twelve games left after today. The Lakers are creeping higher and higher up the lottery rankings, and the Suns won last night thanks to some heady tanking by the Pelicans. It may be true that a bottom-three record (already clinched) gives you an equal chance at Zion Williamson, but securely limiting your fall, particularly in this draft, is key.

With that in mind, let’s remember to focus on the little things.

If I were to tell you Emmanuel Mudiay was having a career season, would you laugh in my face? I hope not, because he has. David Fizdale has given Mudiay, his personal pet project, the greenest of lights, and the results have been career best shooting numbers.

One area where Mudiay has excelled the most is the midrange. Zach Lowe talked about this in his Friday column—Mudiay has been surprisingly deadly, shooting 51 percent on long two-point attempts. A majority of those long twos are those fadeaways we all cringe at until they go in.

While his numbers would lead you to believe he has turned a corner, I’m calling bull. Nothing against Mudiay, but we have seen this movie before. Mudiay is doing what Trey Burke did last year. As Lowe also mentions, there really is no place on a winning team for a guy who’s most effective on the least efficient shot.

With Dennis Smith Jr. questionable, Mudiay will get more chances to do build up his value for the summer.

Frank Ntilikina will miss his 22nd consecutive game. Ntilikina continues to be hampered by a groin injury. Holding Frankie out for the rest of the season at this point in the season would sound logical, if his future with the team was certain. Unfortunately that is not the case.

If there is anyone who can benefit from court time right now it’s Ntilikina. We have yet to see what he and DSJ look like, which would be a sin, should Frank be moved on draft night.

There are many uncertain futures on the roster after Mitchell Robinson, Allonzo Trier, Damyean Dotson, and Kevin Knox. Kadeem Allen returned to the main roster and has continued to make his future a little more certain. Allen was one of the few who had a solid night in San Antonio, scoring 16 points on 70 percent shooting.

Defense remains Allen’s calling card, which he flashed against the Spurs to the tune of three steals. But if he can be a threat on offense, too, keeping him as a bench piece is a no brainer. Over his last five games, Allen is shooting 56.1 percent from the field.

Allen’s source of success could be volume, but defense is certainly his appeal. While a strong scoring effort would be impressive, locking up emerging swingman Josh Hart would do more to secure Kadeem’s standing on the team.

Tip-off is at noon from Madison Square Garden with James expected to play after sitting out Los Angeles’ tilt against Detroit due to “load management.”