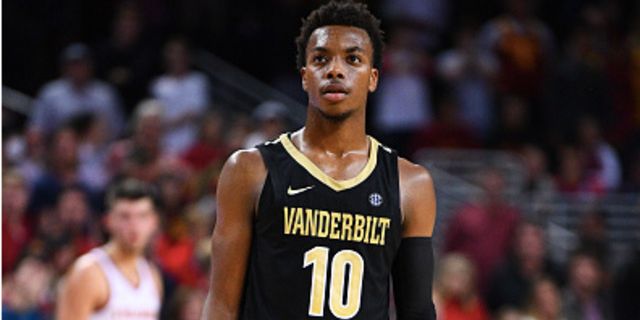 The SEC point guard Darius Garland missed the majority of the collegiate season due to a knee injury but remains a top draft prospect.

The point guard’s lone season with the Vanderbilt Commodores was cut short due to a knee injury, which left him only with five college games of tape for scouts to watch.

Nonetheless, the recuperated Garland will come to Tarrytown, New York, on the eve of the NBA Draft to perform a workout for Knicks brass. SNY’s Ian Begley is reporting the Knicks are looking at Garland as a potential pick at three should top choice Duke’s R.J. Barrett be selected by the Memphis Grizzlies at two.

Memphis is expected to take Murray State floor general Ja Morant with the second overall pick, despite Garland’s insistence that he’s the “best” point guard in this year’s draft.

The Knicks could also choose to trade back and select Garland with a later pick. Givony adds in his report that the Chicago Bulls, owners of the seventh pick, are looking to trade up in the draft. Chicago is in need of point guard and could make a move with the New Orleans Pelicans who acquired the fourth overall pick when dealing Anthony Davis to the Los Angeles Lakers.

This comes on the heels of a recent report by ESPN that claims New York rejected an Atlanta Hawks offer to trade the third pick for Atlanta’s ownership of the eighth and tenth selections.

For the Knicks, Garland would be an interesting option as the outright third overall pick. He projects to be a lethal outside shooting—something the team is in desperate need of, especially from primary creators at the guard position. They currently roster Dennis Smith Jr., career 31.6% three-point shooter, and Frank Ntilikina, career 30.5% shooter from deep.

It would be difficult for the Knicks to pass on Morant at three, however. Morant interviewed with the Grizzlies but did not work out for them. The Murray State sophomore had his own knee issue—surgery to remove loose bodies. Nonetheless, Morant is arguably the draft’s best shot creator, averaging 10 assists last season, and possessing tremendous upside, should the Knicks decide not to pass up on a potentially sliding Morant (depending on Memphis selecting Barrett at two or the Pelicans trading up to take Barrett).

Taking Morant or Garland, however, would produce positive problems for the Knicks. New York would likely have to move Smith Jr. or Ntilikina. The latter was much-discussed at the end of the season as a player the organization has grown sour on, with little to no development since his rookie year. Smith, meanwhile, was in a potential package to New Orleans—that wasn’t “formally” made—to acquire the All-Star Davis.

Regardless, at the moment, the belief is New York will indeed select Barrett with the third pick, and working out Garland is precautionary in case New Orleans agrees to trade up to two or Memphis takes the Duke shooting guard.

»READ: Will Vandy’s Darius Garland be the draft’s sleeper pick?