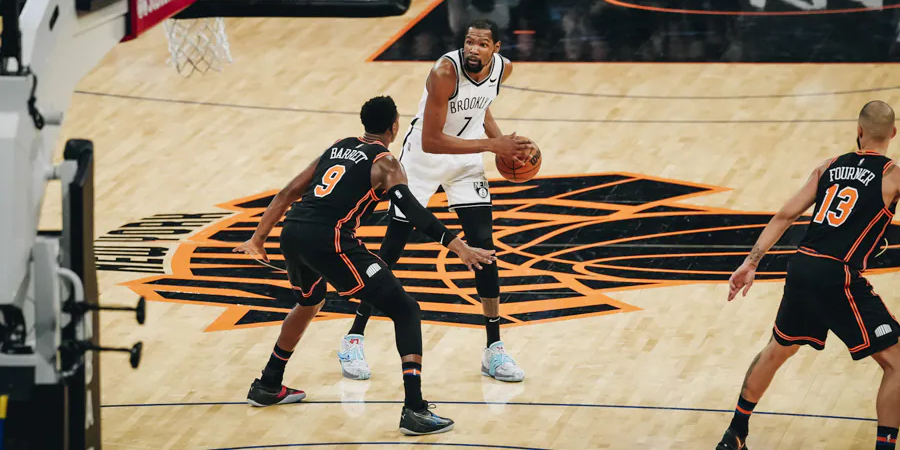 After building an impressive first-half lead, the Knicks only scored 31 points in the second half, giving the game away to Kevin Durant and the Nets.

The New York Knicks (35-45) dropped their final matchup with the Brooklyn Nets (42-38) by a final score of 110-98. After leading by 19 at one point in the game, the Knicks were outplayed between the end of the third quarter and throughout the fourth, and they could not figure out how to stop the Nets from getting back into the contest.

They finish up their regular season against Brooklyn with a record of 0-4. While New York is already out of any play-in or playoff contention, they were trying to rectify multiple close losses to Brooklyn throughout the 2021–22 campaign.

The last time the Nets and Knicks faced off, it resulted in another heartbreaking loss to Brooklyn at the hands of a dominant, 53-point performance from Kevin Durant.

It would also be the first game that Kyrie Irving played against the Knicks as he was not allowed to suit up due to previous vaccination restrictions.

The first quarter began with quick scoring for both teams. Brooklyn went up five points, but RJ Barrett responded with a three-pointer to avoid an auspicious start for the Nets. It was quite the back-and-forth scoring affair, with both teams trading quality shots off good passing. With just over five minutes left in the first, the Knicks and Nets were still playing fairly evenly, with neither dominating until about the four-minute mark of the period. That’s when Brooklyn started to clamp down defensively and capitalize off forced turnovers, extending their lead to five. Just when it seemed that the Nets could start to pull away, though, the Knicks were able to respond with several three-pointers and better defense of their own to get back up by four to end the quarter.

The second kicked off with an open three-pointer from Taj Gibson and an aggressive and-one finish from Barrett. While Brooklyn could not get anything to fall to begin the period, New York had found a rhythm offensively from unselfish ball movement and a faster pace of play. With just over six minutes left in the second, the Knicks were cruising as the Nets were still trying to figure out effective ways to score, and how to gets stops on the other end of the floor. Once Brooklyn did start scoring, New York was able to answer as they were one step ahead of their cross-town rivals during the entire half. Barrett was especially impressive, scoring 16 points and grabbing six boards while dishing out six assists. He and New York dominated Brooklyn through two and led by 17.

What a SICK pass by RJ👀👀 pic.twitter.com/PGoAM8ymNU

After blowing out the Nets through the first two quarters, the Knicks started out the third with the same level of tenacity. They continued to look confident offensively working through Barrett and Alec Burks but needed to bring their defensive energy back up to its first-half levels if they wanted to maintain their large lead over the Nets. The Knicks were starting to let things slip through the first part of the period, and they had to find a way to keep both of the Nets’ stars contained while keeping an eye on their other three players on the court. Eventually, New York picked up their defense, especially in the paint thanks to the consistency of Sims at the rim. Sims also had a few highlight-worthy moments on offense, which was sorely needed with Mitchell Robinson out, and he had the first double-double of his career with just over four minutes left in the third.

Behind a flurry of scoring from Kevin Durant, the Nets pulled closer to the Knicks by the end of the period. But New York was still up 10 heading into the fourth quarter.

New York needed to try and close the game out to avoid a regular season sweep by Brooklyn and to avoid losing another heartbreaker to the Nets. Unfortunately, Brooklyn hit back-to-back three-pointers to open the fourth to pull to within four of the Knicks. After a big first half from Barrett, he had gone silent, while a seemingly dormant Durant had finally awoken to explode against New York and play spoiler. By the 10-minute mark, Brooklyn had retaken the lead over New York, and things looked primed to spiral out of control with momentum on the Nets’ side. Immanuel Quickley and Obi Toppin helped put the Knicks back on top a few times in the period, and Barrett also started to become aggressive again in his drives to the rim.

With just under five minutes remaining, Durant started to try and take control of the contest hitting two big jumpers to get Brooklyn up by two. Kyrie Irving then hit a three with under three minutes left in the period, putting the Nets up by five. Finally, with a three-pointer from Seth Curry, Brooklyn completed their 29-point turnaround, iced the game, and left the Garden with another victory against the Knicks.

Alec Burks led all Knicks in scoring with 24 points coupled with four rebounds, one assist, and one steal. RJ Barrett had an excellent first half followed by a mediocre second, and he finished up with 23 points on 7-of-27 shooting. He also had seven rebounds and seven assists. Obi Toppin had another great start as he wrapped up with 19 points, five rebounds, three assists, and three blocks. Jericho Sims had the first double-double of his career with 10 points, 13 rebounds, three blocks, two assists, and a steal. Evan Fournier was quiet yet again, only scoring eight points while grabbing four rebounds and dishing out three assists.

The Knicks’ bench was uncharacteristically silent in this game. Immanuel Quickley, coming off a triple-double, only scored six points. He also had five assists, three rebounds, and a steal. Taj Gibson had five points, five boards, an assist, and a block. “Deuce” McBride ended up with three points and a rebound.

The Knicks will play the Washington Wizards on the road on Friday night. Both teams are out of playoff and play-in contention, so it should shape up to be a fairly low-stakes contest. 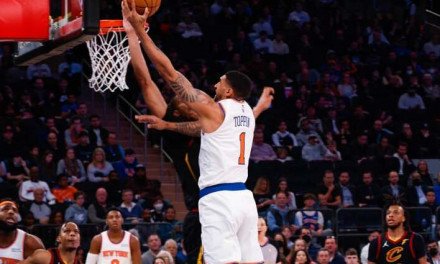