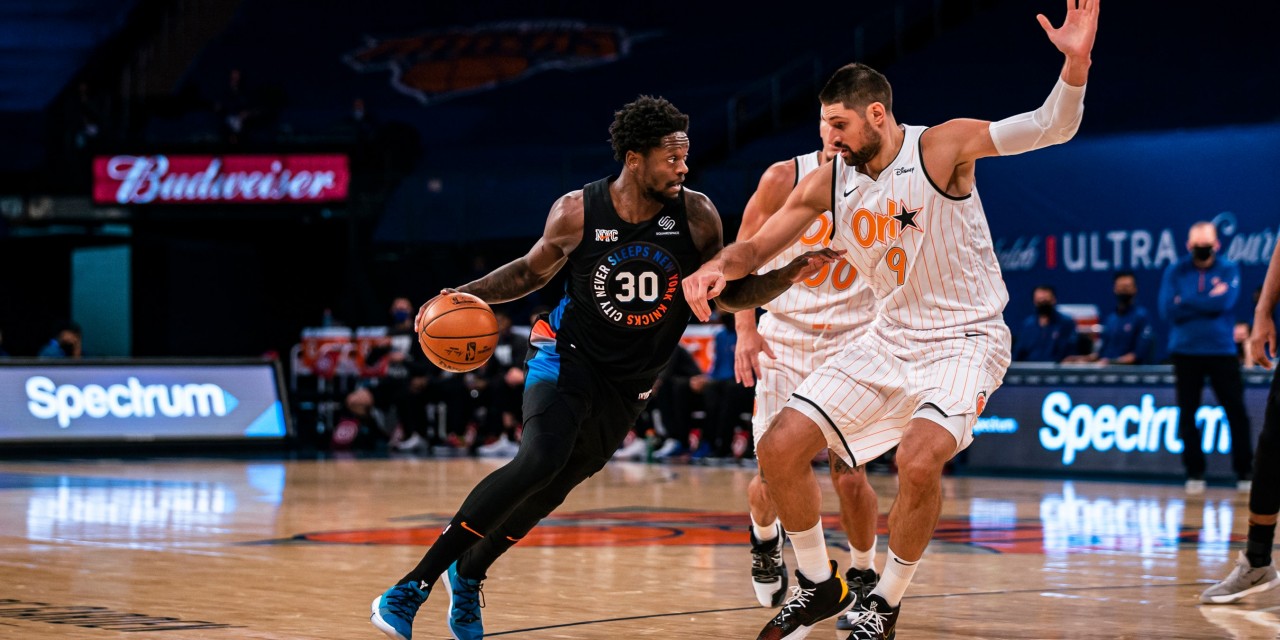 A go-ahead bucket from Julius Randle with under a minute to play helped the Knicks take down the Orlando Magic in their second-straight win.

The New York Knicks (7-8) defeated the Orlando Magic (6-8) 91-84 to win their second straight game in what was another extremely low-scoring affair. It was the first time the Knicks won both games of a back-to-back since October 30th, 2017, having lost at least one game in each of their last 40 back-to-backs, per MSG Network’s Mike Breen.

Following that 15-point lead, the Magic went on a 22-7 run, ultimately tying the game up at 73 with 5:50 remaining. With the game tied at 81, Julius Randle backed down Orlando’s Khem Birch, ultimately scoring the go-ahead bucket with 56.8 remaining. On the subsequent defensive possession, a Reggie Bullock steal led to an R.J. Barrett layup in transition, putting the Knicks up four with 46.2 seconds left. New York never looked back and was able to close out the game.

Barrett led the Knicks in scoring with 22 points on 9-of-19 from the field to go along with 10 rebounds and four assists. Despite only shooting 5-for-19 from the field, Randle had 21 points and 17 rebounds. Bullock, Elfrid Payton, and Immanuel Quickley also scored in double-figures for the Knicks.

For Orlando, Nikola Vucevic led the team in scoring with 24 points on 10-of-16 shooting. He also had 14 rebounds and a costly technical foul with just over five minutes left in a two-point game. Aaron Gordon had a solid game for the Magic despite his poor shooting performance. He had 18 points, 10 rebounds, and nine assists while shooting 6-of-18 from the field. Terrence Ross also had 19 points on 5-of-16 shooting, 4-for-8 from three.

New York has now allowed an average of 79.5 points in their last two games after the Knicks beat the Celtics 105-75 on Sunday afternoon. As expected, Tom Thibodeau has the Knicks playing slow-paced with good defense through the first 15 games of the season.

The Re-Emergence of RJ Barrett

Barrett’s turnaround has been enjoyable to watch. He’s taking smarter shots, and getting to the rim a lot more. Tonight, Barrett may have had his best play of the season called back due to a questionable offensive foul call.

They called this an offensive foul on RJ Barrett. pic.twitter.com/q44VitVDoR

If Barrett can improve on his consistency, it’ll be a major help for the Knicks going forward. It’s important to remember that this was only his 71st career NBA game. He’s still only 20 years old and has played less than a full season.

After scoring 17 points on 7-of-12 shooting and dishing out eight assists in 21 minutes against the Celtics on Sunday, Quickley scored 11 points in 15 minutes today on 4-for-10 shooting.

The 25th overall pick has been great so far for New York and has fans clamoring for him to start over Elfrid Payton. It’s clear, however, that Thibodeau doesn’t have complete trust in him late in games; he pulled Quickley today with 7:50 left in the fourth quarter.

While fans understandably want Quickley to start, it makes sense to bring him along slowly and manage his minutes game-by-game. Quickley’s confidence is high right now, and giving him too big of a role too soon could crush that.

The Knicks have been all over the place to start this season, notching two two-game winning streaks, one three-game winning streak, and a five-game losing streak in just 15 games. Next, they’ll open up a four-game west coast trip on Thursday against the Golden State Warriors.

The west coast trip will be a huge test for this young Knicks teams, one that will likely signal whether playing near-.500 basketball is sustainable for the rest of the season.