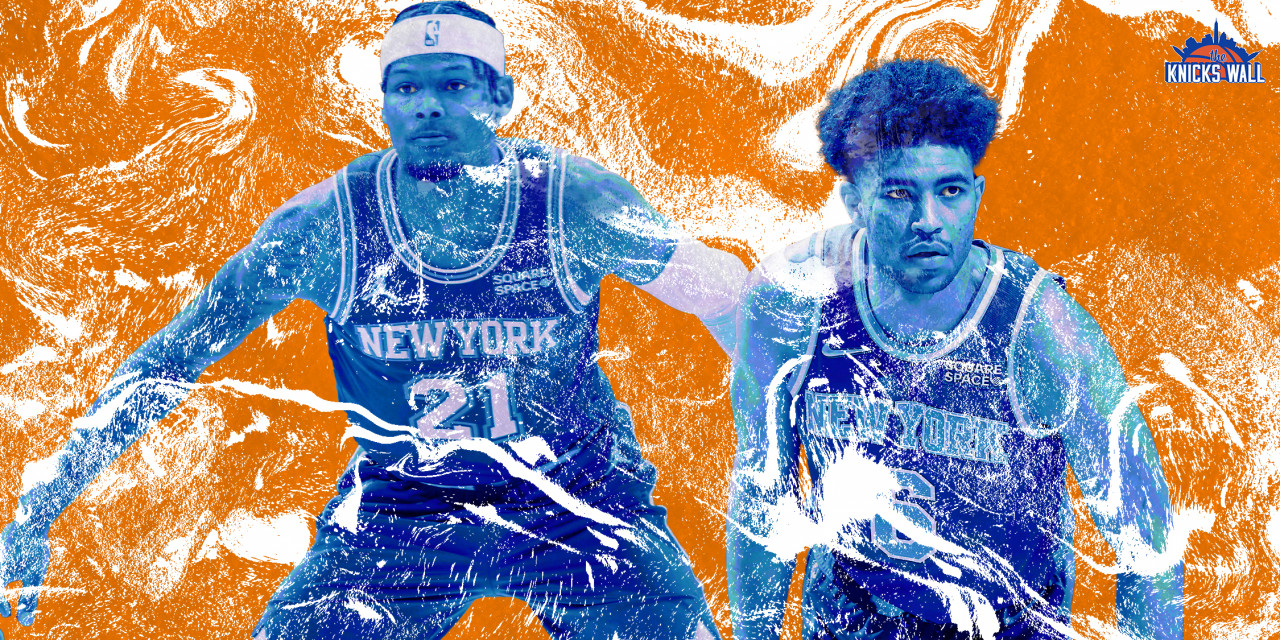 Even as the Knicks put together a solid stretch of basketball, it’s tough not to peek towards next year. One morsel of optimism for next season is New York’s litany of wings.

Things have picked up a bit for the New York Knicks recently. Winners of its last three games, New York remains in reach of a play-in spot in the Eastern Conference with games remaining against 10th seed Atlanta and 11th seed Washington. RJ Barrett continues his successful run and finally, the kids are getting more and more playing time, adding an extra wrinkle to this final stretch of the season.

However, I wouldn’t blame anyone if they mentally checked out on this season and looked ahead to the offseason, where New York can take the biggest leap. Despite a rough season, the optics of having a lottery pick, and cap flexibility to finally land a point guard to run the show, the Knicks brass has a chance to get back on track and live up to this season’s expectations with a proper offseason.

In looking at reasons to be hopeful for New York’s future, the current wing depth on the roster is what stands out. It starts with Barrett, who has assumed a larger role in running the offense to moderate success. There are still areas for improvement, such as efficiency and free-throw shooting, but with another step forward, Barrett is set to receive a contract extension this summer, freeing the Knicks of the Charlie Ward Curse, and entering next preseason with palpable buzz for his first-ever All-Star bid.

That said, I wanted to step away from Barrett—and Alec Burks—and shine a light on New York’s other wing players. Evan Fournier, Quentin Grimes, and Cam Reddish all offer different skill sets that allow the Knicks to play in a modern way, even if Tom Thibodeau doesn’t see it. With Reddish out for the season with a separated shoulder and Grimes out for another week recovering from a knee injury, it’s tough to see now, but New York could have a strong wing room for next season.

Whether it’s Tom Thibodeau, Johnnie Bryant, or any other coach running the show next season, the first move they should consider is moving Quentin Grimes into the starting lineup and utilizing Evan Fournier off the bench.

In a world where New York lands Dallas’ Jalen Brunson, the apple of their eye for a few years now, then the second wing position alongside Barrett has to fit a mold. Fournier, while talented, doesn’t make for an ideal option in that lineup. Meanwhile, Grimes is a perfect fit. The former University of Houston swingman looked comfortable defending various wings and guards, forming a solid 1-2 punch with Barrett defensively. Grimes also doesn’t need the ball to thrive offensively, assuming a spot-up/catch-and-shoot role, similar to Reggie Bullock last season, leading to averages of 6.3 points and 39.8% from the outside.

And as we saw at various points throughout the season, Grimes is a little bit more than a “3-and-D” guard, often assumed as wing players with little to no creativity with the ball in their hands. One game to look back on was New York’s game against San Antonio where Grimes had six assists. Grimes looked comfortable putting the ball on the deck, drawing in the defense, and making a solid pass. While I don’t see him being an elite ball-handler, he might be more Desmond Bane than, say, Troy Daniels.

To Fournier’s credit, he’s been a solid performer. Currently averaging 14.3 points and 39.0% from three on a blistering 7.6 attempts, the Frenchman has been solid but not worth the expensive price tag, which muddies up his overall season. However, his defense ranges from poor to disastrous on many nights and he does have the propensity to disappear on both sides of the ball. It’s not the worst contract in basketball, but there are several nights where he leaves Knicks fans wanting more.

The one area where Fournier has been underutilized is as a pick-and-roll ball-handler. This season, Fournier is in the 73rd percentile as a ball-handler, per NBA.com’s play type data, which matches up with his career. In Orlando, Fournier was capable to run some pick-and-roll and create jumpers, whether it be for himself or others. Moving him to the bench and moving him into the Alec Burks role—a secondary ball-handler who could thrive against backups and carry a third-quarter lineup—feels ideal, even if he’s a bit expensive for the role.

The arrival and emergence of Grimes shouldn’t equal the departure of Fournier, but rather, another equation for the head coach to figure out: Can we get the best of Grimes’ defense and Fournier’s offensive shooting and creativity?

When the Knicks traded a first-round pick for Cam Reddish in December, the move was viewed as an upside play for a team that couldn’t add another rookie to this group of young players. Through his three-year career, Reddish has flashed but was never able to put it all together. It felt like he wasn’t going to get his chance this season either, starting on the outside of New York’s rotation upon arrival and slowly tossed into blowouts when he did dress for the Knicks.

Prior to his shoulder injury, Reddish played double-digit minutes in seven straight games and, in those seven games, Reddish flashed a bit of everything on the floor that made him an elite high school prospect and divisive draft prospect. There’s a Swiss Army knife there; Reddish created well in a secondary offensive role, finding several good looks from the outside, even though his shot has waned. When working on the ball, Reddish can create and generate good looks, whether it be from the mid-range or when attacking the rim.

Cam Reddish has so much 2-way potential pic.twitter.com/1VBg9f9ovu

The most impressive skill is his defense. Reddish is an active defender who could handle most perimeter players when he’s on. His overall size and length allow him to be an option against bigger wings as well as guards and his instincts and quick hands result in him being an adequate player in the passing lanes. While he may never be an elite defender, being a good defender is not an unrealistic fate for the former Duke forward.

The injury dashed any chance for Reddish to shine with the Knicks, but he left us a good gift. That 17-point performance against the Clippers showed us the former Hawks’ complete game, slashing through a top-10 defense and getting good looks as Los Angeles had no answer for him. Leading into next season, a sizable 25 minutes-long role off the bench would not only help the Knicks but potentially help Reddish capitalize on his pending restricted free-agency status.

Based on the early mock drafts of the 2022 NBA Draft, the point guard class looks weak, while the strength of the class appears to be wings and combo forwards. The Knicks, despite having four pretty good wings on the roster and Alec Burks, who has played more point guard this season, should remain active and select one if they’re the best player on the board.

Currently sitting in the 10th spot in the lottery, that takes them out of potential big-name wings like Wisconsin’s Johnny Davis or Duke’s AJ Griffin, but that puts them into range for Arizona’s Bennedict Mathurin, Baylor’s Kendall Brown, and G League Ignite’s MarJon Beauchamp. All thee would give the Knicks upside wing who can contribute in spot minutes as a rookie before working in a larger role in his second season. Mathurin is the best shooter of the three, Brown has more defensive chops, while Beauchamp offers more creativity off the dribble and feels very similar to Reddish.

This also opens up for New York to use both Cam Reddish and RJ Barrett at the 4 for more inventive small-ball lineups. One of New York’s biggest shortcomings this season has been the neglect to use small-ball lineups; two point guards, Julius Randle–Obi Toppin lineups, and more importantly, Barrett at the four. Both Barrett and Reddish have shown their ability to use their size to thrive in the paint and could give New York another element. For RJ, especially, using him at the four allows the Knicks to supplant shooters around him, giving him proper floor balance and allowing him to use more on-ball reps as a pick-and-roll ball-handler.

The Knicks having a lottery pick this season feels like finding a $20 bill in your jeans. It’s free money. Now, the Knicks should utilize it with another strong wing player who can add strength to their strength and give their coach—whoever that may be—no excuse to utilize small-ball lineups with Barrett and Reddish to create mismatches around them with shooting and attack opponents in transition.

When talking about getting the Knicks back on track, New York’s glut of wing players has to sit at the top of the list. Not only has Barrett taken a proper leap, but Grimes went from a late first-round rookie to an indispensable two-way option. Fournier’s contract will overshadow his performances, but the veteran offers high-level shooting and success as a pick-and-roll ball-handler. Reddish will continue to flash, but putting him in a solid 25-minute role where his vast skillset can flash off the bench.

A quick glance at the league would tell you that thriving with multiple wing players is the way to go. The Phoenix Suns, an NBA title favorite, are led by Chris Paul, but the quartet of Devin Booker, Mikal Bridges, Cameron Johnson, and Jae Crowder is also crucial. The Golden State Warriors have Klay Thompson, Jordan Poole, Otto Porter Jr., Andrew Wiggins, and rookies Jonathan Kuminga and Moses Moody on standby. The Miami Heat boast Jimmy Butler, Tyler Herro, Duncan Robinson, and a returning Victor Oladipo. Having a xylophone of versatile wing players covers up for so much on your roster. The Knicks could be there one day.

So as the Knicks remodel their roster this offseason and maybe switch their head coach, one thing to keep in mind is the glut of wing players on the roster and how to utilize all of them for the foreseeable future.