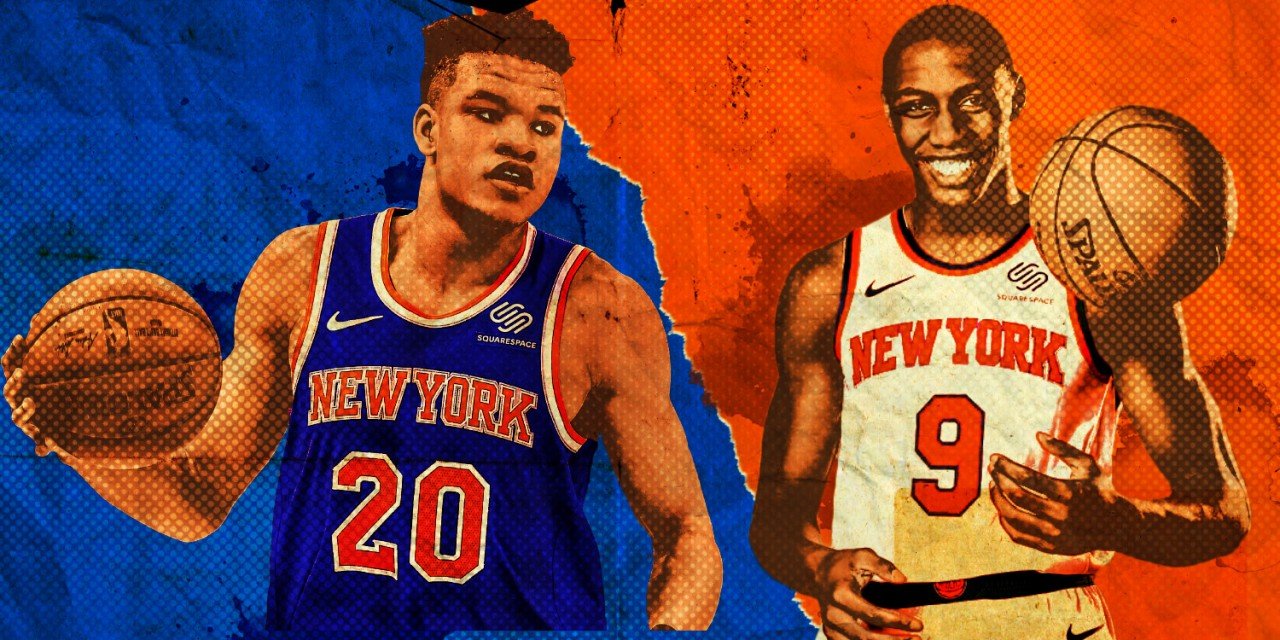 Previewing the Knicks’ wing depth, including the new additions in veterans alongside young players like Kevin Knox and Damyean Dotson.

Heading into the 2019–20 regular season, the New York Knicks have several question marks surrounding their rotation, most of them being around the play of their post players. However, the use of their wings will be key in determining the team’s success early in the season.

Last season’s wing class was led by Tim Hardaway Jr., whose large contract created more detractors than supporters. Veteran Courtney Lee bounced in and out of the team with various injuries, which led minutes for the likes of young players Damyean Dotson, Kevin Knox, and Allonzo Trier.

The result? Dotson took a step forward as a contributor, Trier made it onto the main roster for good and submitted a solid rookie season, and Knox had his ups and downs as an 18-year-old. Hardaway and Lee found themselves off to Dallas in an attempt to create a second max cap space slot.

The Knicks, clearly unhappy with the team’s 17-65 record and 30th-ranked offense, added three more wing players and drafted R.J. Barrett, all with the intent of improving this upcoming season. The team might be better, but it only gives head coach David Fizdale a tougher job juggling the minutes of a loaded backcourt.

Let’s take a look at the group of wing players fighting it out for a spot in Fizdale’s rotation.

Morris offers New York toughness and an offensive player who could absorb possessions with his isolation game, while also providing solid shooting from beyond the arc. Last season, Morris knocked down 37.5% of his 389 threes, something the Knicks desperately need.

After spurning San Antonio for the Knicks, it’s tough to envision Morris outside of the rotation. That said, it will be interesting to see how New York balances playing—or keeping—him to letting their younger players play when inevitably the Knicks fall out of the playoff picture.

The New York Knicks were 30th in the league in offensive efficiency largely because they didn’t have many players who can shoot the basketball. New York finished 22nd in total three-point attempts, 21st in frequency and 28th in percentage. At the very least, the Knicks will be able to shoot this season.

Ellington, a bit of a surprise signing this offseason, offers New York a marksman at the shooting guard spot. Last season, Ellington shot 37.1% on 372 three-point attempts. His defense is ghastly, largely because of the lack of length. Strictly a shooting guard, Ellington will offer the second unit a knockdown shooter.

You could copy and paste the Ellington section and place it here for Bullock. Bullock is a talented wing player who has made a living as a standstill shooter. Last season, Bullock made 37.7% of his 393 total attempts. With Ellington, Bullock will be valuable in lineups alongside the likes of Mitchell Robinson and Julius Randle, serving some balance to New York’s attack.

While Bullock is a poor defender, he offers a pinch more versatility, thanks to his 6-foot-7 frame. That is it, though, as Bullock makes a minimal contribution as a rebounder, passer or really, a shooter off the dribble. Fizdale would be wise to use him in both wing spots and even as a 4 in small-ball lineups.

While I’m curious to see how New York treats Barrett after Kevin Knox’s up-and-down rookie season, there’s no way he isn’t in the rotation for the season opener against San Antonio.

Barrett’s positives are well-known: He’s elite when getting downhill on offense, he knows where to be and where to move when he’s off-ball, solid at handling the ball, and has even looked better defensively during the preseason. At the very least, those traits should help him early in his career.

RJ WITH THE SAUCE pic.twitter.com/jYZTFlAD9b

His passing and shooting are going to be his swing skills. Barrett has improved his shooting touch but will have to make another leap from the 30.8% from three and 66.5% from the free throw line he showed at Duke. We’ve seen glimpses of point Barrett at Summer League, but none during the preseason.

The most important young player on the roster, it will be crucial for the Knicks to properly balance out Barrett’s lineups with shooters and hope that he is the star they believe he can be.

The next group of players is guys the Knicks could shuffle in and outside of the rotation this upcoming season.

The two most important players for the future of the New York Knicks, besides Barrett, are Kevin Knox and Dennis Smith Jr. So why does Knox feel buried on the roster compared to Smith?

As stated before, Knox had a terrible rookie season. Though just 18 years old, Knox looked lost at times and struggled on both sides of the ball. He didn’t make many advanced passes, showed minimal versatility as a defender and didn’t really flash a second skill. In short, he looked like just a shooter, which is a poor use of a top-10 pick.

Still, Knox has a chance to improve in his sophomore season. The addition of players like Morris and Julius Randle offers Knox an offensive player to work off of. Smith Jr. and Elfrid Payton could, in theory, bring two point guards who allow Knox to produce offensively without running the offense while Taj Gibson could protect him in the frontcourt.

With Reggie Bullock out to start the season, Knox should be moved into that potential rotation spot and given a chance to show his improvements.

This time last season, Trier was a rookie player who looked good in Summer League and was seen as an ideal developmental player for the G League team. Now, after a surprisingly successful rookie season and a pay boost, Trier comes back with a more defined skill set, but also more competition.

Trier is a professional scorer, capable of getting buckets at all three levels. Consider it a gift and a curse, as Trier settles for a ton of mid-range jumpers. Trading in long twos for threes and shots at the rim could help him in the long run, but early returns in the preseasons haven’t been kind.

My goodness, Allonzo Trier is such a bucket pic.twitter.com/gVoB3dzZz2

Trier feels like a player the front office and coaching staff likes a ton, and as a result, could find more minutes than one may think. However, with Ellington and Bullock on the roster, Knox being a higher priority due to draft status and Barrett the shiny new toy thrown into the mix, Trier feels like someone who could be on the outside looking in.

Look at the last paragraph for Trier’s write-up, add Trier himself and then you have Dotson’s outlook.

Over the last two seasons, Dotson has shown some interesting traits. He’s a solid rebounder for a guard, he improved his shooting numbers from year one to year two, and he’s a solid defender. When the Knicks were pursuing star players this past summer, it was guys like Dotson who made sense to fill the gaps around them. Now that those stars went elsewhere, Dotson feels like a lost man on this upgraded roster.

The weirder part is that Dotson actually makes sense on this roster. He’s good enough defensively to help cover for the shortcomings of Bullock and Ellington, the ability to space the floor alongside someone like Barrett and the versatility to play him at both wing spots without much being given up defensively.

It certainly feels like Dotson will be one of the odd men out, but based on his skill set, he should probably be given a spot in the rotation until someone outplays him.

The Knicks loaded up this offseason with the desire to move out of the doldrums of the league. After striking out this offseason, the Knicks wanted to improve their winning percentage and show the rest of the league that they’re moving in the right direction.

With the additions of Ellington, Bullock, and Morris, the Knicks made it clear that they wanted to improve on shooting the ball and spacing the floor. However, it appears to be at the improvement of their younger players like Knox, Dotson, and Trier at the beginning of the season.

Head coach David Fizdale will have a litany of options and with six of the seven being capable shooters, the Knicks will have the adequate floor spacing needed in today’s NBA. Still, the large number of options will bring its own issues, especially if the veterans don’t get their playing time.

New York will be better on the wings, but with so many options, it will be interesting to see who is on the outside looking in come the regular season opener against San Antonio.