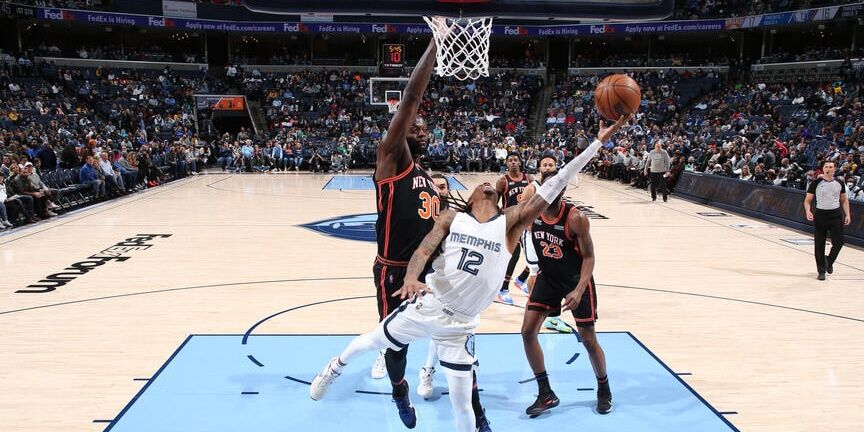 The Knicks’ winning streak ends at three games in a loss to the Grizzlies, who turned it up down the stretch thanks to young studs Ja Morant and Jaren Jackson Jr.

The Memphis Grizzlies (46-22) defeated the New York Knicks (28-39) by the final score of 118-114. For Memphis, Ja Morant finished with 37 points and eight assists, while Desmond Bane had 12 points and five rebounds. For New York, Julius Randle led the way with 36 points, 12 rebounds and six assists, while R.J. Barrett finished with 23 points, seven rebounds and two assists. The Knicks remain in the 12th spot in the Eastern Conference in the loss.

When you look at the records, it’s fair to envision this one being a blowout. The Knicks are scrapping for a playoff spot, while the Grizzlies are one of the best teams in the Western Conference. However, each of the last two times the teams played against each other, New York always played Memphis tough, even leading at various times. This game was no different.

When Memphis started the game with two of their first three field goals as dunks, there were concerns that this game could get out of hand. However, Julius Randle, who has played well recently, was active early, attacking Memphis’ defense, whether it be from the outside or attacking the rim. As New York’s offense started slow, it was Randle who kept the Grizzlies from taking a double-digit lead.

Memphis was aggressive, led by Ja Morant attacking the paint and using his athleticism to create some tilted defenses for his teammates. Bane was the early beneficiary with his outside shooting, while rookie Ziaire Williams was right there attacking Evan Fournier and Alec Burks when they started ball-watching.

Memphis even flashed their depth with Brandon Clarke, Tyus Jones, De’Anthony Melton, and Kyle Anderson all having moments in the second half – impacting both sides of the ball and keeping the Knicks at bay. Even with a Steven Adams injury, Memphis maintained success with Jaren Jackson Jr and Clarke in the paint.

And once New York woke up, the Grizzlies had a hard time keeping up. Burks did a good job creating good looks at the rim, while Barrett took advantage of Memphis’ wings on the mid-range. A few Fournier threes helped the Knicks enter the fourth quarter with a lead. Even though New York finished with six scorers in double figures, New York’s offense waxed and waned throughout the night outside of the Lucky Lefties. The third quarter was a strong quarter for the Knicks, as they finished with 40 points in the period.

Julius and-1 with three defenders on him pic.twitter.com/aRYY99A88v

In the end, it was the Morant show in the fourth quarter. Even as New York pushed their lead to five, the All-Star wasn’t going to allow the game to get too far away. An array of drives allowed Morant to get to the line and put the finishing touches on a 30-point performance.

Even as Immanuel Quickley and Barrett got some good looks to keep the game close, a Jackson block, Morant layup, and Jackson contest was enough to push Memphis’ lead to seven and put New York away for the win.

The Knicks travel to the Barclays Center in Brooklyn, New York to face the Brooklyn Nets (34-33) on Sunday, March 13th. Tipoff is set for 1:00 pm.

»READ: An Expanded Role for Obi Toppin Would Benefit All