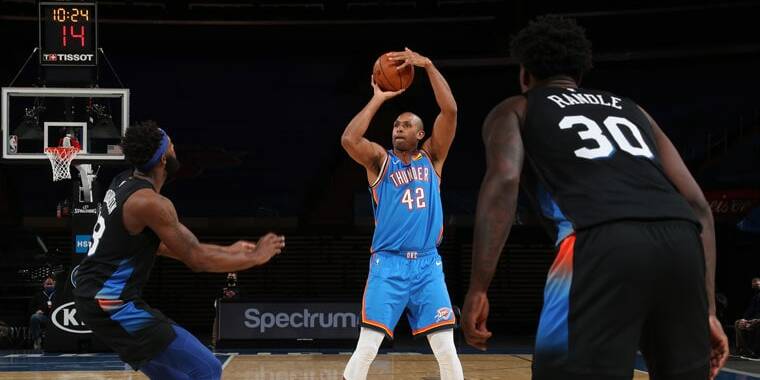 The Knicks did not come to play on Friday with the rebuilding Thunder in town. Their three-game winning streak was broken in a pathetic offensive display.

The Oklahoma City Thunder (4-4) defeated the New York Knicks (5-4) by a final score of 101-89. For the Thunder, Shai Gilgeous-Alexander finished with 25 points, 10 rebounds, and seven assists. For New York, R.J. Barrett finished with 19 points, seven rebounds, and two assists. With the loss, New York’s three-game winning has been snapped and the Knicks move to 5-4 on the season.

If Monday’s first quarter against the Utah Jazz was a rock fight, tonight’s game was right out of 1995. This wasn’t a defensive standstill, both teams couldn’t hit water if they fell out of a boat. The only player that had a positive half was Al Horford, who would finish with 15 points, including three made three-pointers. The 42-42 halftime score didn’t do justice to how poor both teams looked from the field.

The second half saw a much more looser game for both sides, with OKC taking advantage. Both Gilgeous-Alexander and Hamidou Diallo took advantage of New York’s defense by turning defense into offense and getting quick looks in transition—Gilgeous-Alexander using his length to finish over any and every Knick defender, while Diallo used his athleticism to get over them.

Putting the Knicks under the spotlight, Julius Randle’s lack of offense was the same thing that hindered the Knicks. Randle, who finished with 18 points, didn’t score his first points of the night until the third quarter but did have five assists in the first half, so he was active. It was largely Barrett and Elfrid Payton who kept the offense humming. Credit to OKC’s defense, as Barrett and Payton struggled to 7-of-19 shooting.

To New York’s credit, they continued to play hard. The ball movement was crisp in the second half, often making the extra pass and finding some good shots. The ball just wasn’t going in. After Barrett and Payton carried the offense in the first half, Randle and Austin Rivers did their best in the second half. Still, shots were not falling.

Randle to Rivers to RJ for the SLAM, cuts the lead to 5 pic.twitter.com/TRq13dQDhg

On the other end, Mitchell Robinson’s lack of playtime in the fourth resulted in Oklahoma City being able to get to the middle of the floor at will, creating havoc and constantly piercing New York’s defense. The Thunder pulled away as New York went to a lineup with Randle at center, which in turn, created a hole in the middle of the defense.

The Knicks lost this game in two ways.

One was OKC’s funky roster. Bound by the athleticism of Gilgeous-Alexander and Diallo, the Thunder turned defense into offense and got quick buckets. When OKC was in the halfcourt, Horford came into play with his ability to operate dribble handoffs and great passing at the top of the key for role players to find good looks. It was a great combination that kept New York at bay.

Second, the Knicks had a poor offensive game. New York finished with 36.2% shooting from the field and 34.6% shooting from three. Once Randle was stymied, the rest of the Knicks couldn’t step up, despite Barrett’s best efforts. There were some questionable choices and the final score suggests that the Knicks were blown out, but there were positives taken away from this game.

The Knicks finish their three-game homestand against Western Conference foes on Sunday against the Denver Nuggets.

»READ: How the Knicks can utilize Obi Toppin

»READ: To trade or not to trade: the Alec Burks conundrum