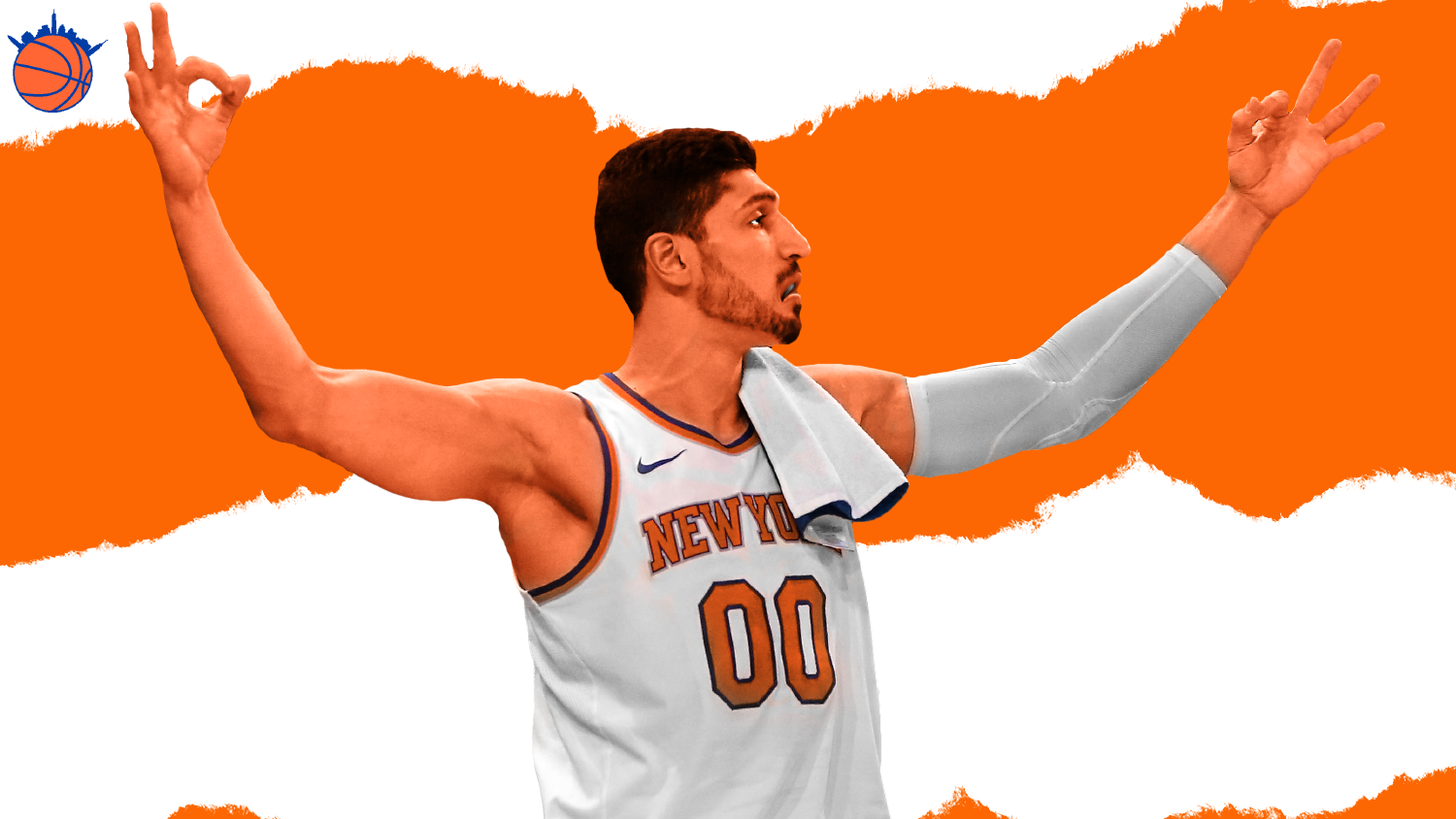 In a league trending towards spacing and outside shooting from semi-reliable bigs, the Knicks have found zero threat from deep with their starting frontcourt of Noah Vonleh and Mitchell Robinson.

The New York Knicks’ starting frontcourt of 23-year-old Noah Vonleh and 20-year-old Mitchell Robinson is both the youngest and, ironically, the most offensively out-of-date frontcourt tandem in the NBA. They take a combined 1.2 three-pointers per game—the fewest in the league for a starting frontcourt. All of the attempts come from Vonleh, who’s 5-of-15 on the season. The rookie Robinson has taken one shot outside of the paint all year.

This defensive-minded duo—for all its athleticism—is an offensive anomaly in 2018. No other team in the NBA gets such little shooting, and the space this shooting creates, from its starting frontcourt.

What should David Fizdale do?

Robinson’s inability and Vonleh’s reluctance (influenced no doubt by an unproven, but not broken, shooting stroke) to shoot the ball has a profound effect on the ‘Bockers offense. Both guys are almost exclusively worker bee offensive big men. They both screen, roll to the rim, and run dribble handoffs—repeatedly—until a perimeter player gets a shot, and they can crash the offensive glass.

Are… are the Knicks a better 3 pt shooting team than the Warriors??? Vonleh joining the fun pic.twitter.com/S5xnX6YE2U

This compacts an already dangerously crowded court. Not being able to shoot, and not even being a threat to shoot, instantly gives Vonleh and Robinson’s defenders a license to over-help, confident they won’t be punished. Defenses can then aggressively hone in on Tim Hardaway Jr.—the Knicks’ overworked offensive engine—with little downside. Defenders are happy to leave a slumping Frank Ntilikina to shoot from the perimeter, with only Damyean Dotson to keep them honest.

This starting lineup essentially allows opponents to devote all defensive resources to stopping Timmy, which, for most teams on most nights, isn’t too difficult.

The offensive limitations of Vonleh and Robinson compound and emphasize the limitations of Ntilikina and make life infinitely harder for Hardaway. David Fizdale plays this frontcourt combination despite this claustrophobic spacing, because of the defensive downside of the alternatives. Mario Hezonja would loosen things up, but he’s a train wreck on the other end. Enes Kanter makes Hezonja look like Kawhi Leonard.

Kevin Knox would loosen things up, and profiles as a perfect, modern, stretch 4. The rookie, though, was sidelined with an ankle injury when Fizdale first inserted the Robinson/Vonleh duo into the starting lineup.

Just how long can Fizdale run with this anachronistic non-shooting duo before turning to a more modern alternative?

The way the offense has sputtered and strangled itself recently, a change may be on the way sooner rather than later. The current, traditional, two-big frontcourt is the worst shooting tandem in the NBA. Frankly, this roster cannot afford to be such an offensive outlier.

Just how outdated is the Vonleh/Robinson duo?

We live in a world where JaVale McGee, Andre Drummond, and Hassan Whiteside are letting it fly from downtown. Where Brook Lopez is launching 7.2 (!) triples a game. Where the term “stretch 4” is no longer necessary. Stretchy-ness is assumed, normalized, and for the majority of teams, if they want to have a functioning NBA offense: necessary.

Outside of New York, only five other starting frontcourts in the league attempt fewer than three triples per game, and all of them are easily distinguishable from the Knicks duo. The Indiana Pacers’ Myles Turner and Thaddeus Young take just 1.2 threes each per game—a surprisingly low number that’s mitigated by the fact that both guys shoot it, and both have a semblance of an in-between game; Turner with his mid-rangers and Young with his herky-jerky runners.

The Golden State Warriors’ Damian Jones and Draymond Green combine (all from Green) for 2.1 three-point attempts a game, but they’re the Warriors. The Phoenix Suns’ Deandre Ayton and Ryan Anderson (all from Anderson) combine for 2.7 attempts a game. Despite this low number, Anderson is a proven sniper and creates space just by loitering beyond the arc. The San Antonio Spurs’ LaMarcus Aldridge and Dante Cunningham combine for just 1.8 attempts a game (0.5 from Aldridge and 1.3 from Cunningham), but for the Spurs, L.A. spaces from long-two territory, on high volume and with high efficiency.

The closest analog to the Knicks frontcourt in the league—from a positional archetype perspective—is the Utah Jazz. Rudy Gobert is almost exclusively a dunker on offense, an elite vertical spacer, and a relentless threat diving to the rim. This should be the offensive model for Robinson. Derrick Favors, the Jazz power forward, takes 1.3 threes a game—just a hair above Vonleh. The difference is that Favors is a substantially more versatile and polished offensive player—a superior passer, mid-range shooter, and post-up threat.

The Jazz makes up for this frontcourt shooting shortfall by executing one of the most dynamic halfcourt offenses in the league. A dizzy whirlwind of synchronized player and ball movement. With a starting five rounded out by a passing savant in Ricky Rubio, one of the best shooters on the planet in Joe Ingles, and a budding superstar in Donovan Mitchell, the Jazz offense can survive with a non-shooting frontcourt.

These teams—the Spurs, Warriors, Jazz—are championship-chasing teams. And they are the non-shooting exceptions in a league positively drunk on three-point shooting, regardless of position and regardless of shooting ability. However, there is no starting frontcourt as analytically primitive as the Knicks’ current combination of Vonleh and Robinson.

One thing is for sure, Fizdale won’t hesitate to tinker with the starting lineup. Inserting Knox for Vonleh would be a reasonable compromise and the best of a batch of imperfect solutions. Knox would be a huge offensive upgrade on Vonleh and instantly modernize the Knicks starting group with shooting and a much needed Robin to THJ’s Batman.

The defensive drop-off from Vonleh to Knox is surely worth this offensive shot of adrenalin. Vonleh is a solid defender, and a dumbbell of a human, with an elite defensive stance (seriously, this guy is in the 99th percentile of aesthetically pleasing defensive stances), but he’s not exactly Draymond Green. Knox has similar size, if not similar bulk, to replace at least 60-70 percent of Vonleh’s value on the defensive end.

Nice effort from Kanter on the glass, kicks out to Knox, BANG. pic.twitter.com/nsCqbhzkjz

Besides, the real defensive value in the first starting lineup shuffle, five games into the season, was inserting Robinson for Kanter. Robinson is not yet an objectively “good” defender, but he’s so long and mobile that he’s, at worst, a disruptive defensive force, and at best, he’s casually blocking nine shots in 22 minutes of action. And, most importantly, he’s not Enes Kanter.

Vonleh’s destiny in the NBA is as a small-ball center, and playing him next to Robinson was always a temporary sticking plaster rather than a season-long solution. There will be an offensive rebounding drop off in the starting lineup, but Kanter and Vonleh can still terrorize second units together on the glass.

Knox for Vonleh is the obvious move for Fizdale after a disastrous, optically damaging offensive display at home against the lowly Orlando Magic on Sunday night. Ntilikina, the polarizing point guard, struggled in limited action, going 0-for-3 from the field in just five first-quarter minutes, before being benched for the rest of the game for the more offensively inclined Trey Burke.

Hopefully, Fizdale will resist pulling Frank from the starting lineup. After endless calls for the Frenchman to be more aggressive, he’s finally shooting the ball, although he’s in a horrendous shooting slump. It would be a mistake, though, to make him the offensive scapegoat here.

Ntilikina is taking the exact same shots he was taking a couple of weeks ago when he posted back to back games of 17 and 16 points against the Warriors and Brooklyn Nets. It would be crazy to remove Frank—unequivocally the best defender on the roster—after he’s finally being “aggressive” offensively, because you want to keep Vonleh, a solid but unspectacular defender and offensive floor shrinker, in the starting lineup for defensive purposes!

The Knicks are a bad rebuilding team, and they would benefit from all available fruit, wherever they can get it. A functional offense at the expense of a slight defensive drop-off is a reasonable trade-off. Especially when that trade-off stands to benefit the other three starters, particularly the developing Ntilikina.

Besides, who doesn’t want to see a trio of 20-year-old Ntilikina, 19-year-old Knox, and 20-year-old Robinson playing together?

All stats from Basketball-Reference.com