Knicks Wrap Up West Coast Trip in Phoenix Against Suns 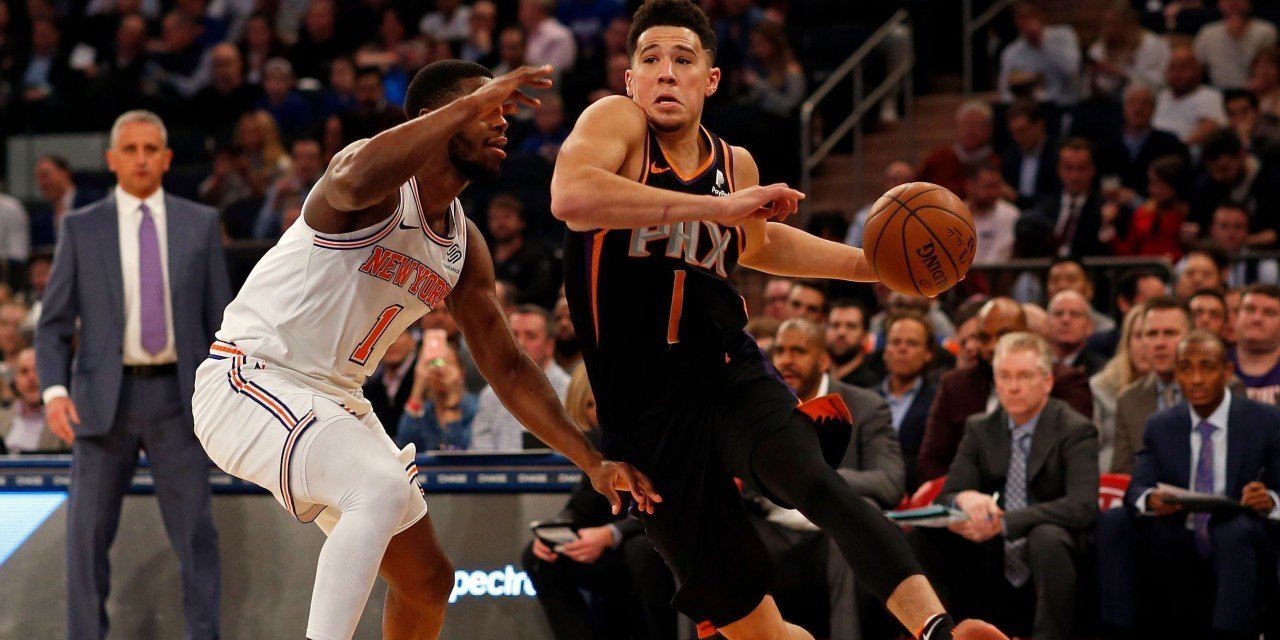 At their final stop on the road trip, did the Knicks pack enough SPF to stop the red-hot Suns?

Who’s ready for the Tankathon Classic!? The Knicks (13-51) wrap up their brief west coast swing with a stop in Phoenix, facing their biggest threat to the league’s worst record. The Suns (14-51) come in scorching hot for their standards. After losing 17 games in a row—a feat so anemic, so pathetic, that no one gave a shit enough to get jokes off—they now face the Knicks after back-to-back wins against LeBron James and Giannis Antetokounmpo.

The Knicks once had a win streak of their own, a magical two-game stretch. The tank has rolled on since then. A strong effort against the Kings was encouraging after the team sleepwalked around the Staple Center on Sunday, but it marked their 51st loss of the season, nonetheless.

Tonight will feature a nice group of young talent on both sides. DeAndre Ayton has flown under the radar with all the Trae Young and Luka Doncic hysteria, but he is having a productive rookie season. He had a strong outing versus the Bucks, finishing with 19 points, 12 rebounds, and three blocks.

For the Knicks, Allonzo Trier and Dennis Smith Jr. are coming off strong outings.

Zo went off for 29 points, eight rebounds, and two steals off the bench. DSJ was not far behind with 18 points, five assists, and three steals. The young guards also found success together, forming a pairing David Fizdale should look to explore again tonight.

Young talent is sadly all we’ve got—the rest of this game will be ugly. These are two bad basketball teams. It is not a coincidence both teams have won 27 games combined.

Also, the Suns passed on De’Aaron Fox and Luka Doncic in consecutive drafts. That’s not laughed about enough. Anyway, here’s what to watch out for tonight.

Take a Step Back

David Fizdale has used benchings as learning experiences for his young guys. Just about everyone has spent a full 48 minutes in warm ups. Frank Ntilikina remained on the bench for what felt like an eternity. Damyean Dotson had his turn, as did Mitchell Robinson.

Kevin Knox has evaded his stint on the bench. He is one of the few guys who has not received a DNP this season, with Trier and Noah Vonleh being the other two. Fizdale said from the jump Knox would be thrown to the fire, but if there was ever someone who needs to take a step back and watch, it’s Knox.

He shot over 50 percent from the floor last night, something he hadn’t done since his 31-point outing against the Sixers back on January 13.

The shooting woes are made worse by his defense. He has a cringeworthy defensive rating of 116 this season and has looked every bit as bad as that sounds. A brief hiatus could help Knox get back on track. Right now he looks like a man with no country—time watching the game could allow him to see where he can make adjustments.

Meanwhile, Allonzo Trier’s stock is once again rising. In his last 10 games, Zo is averaging 15.0 points on 52.9 percent shooting from the floor and 79.6 percent from the line.

He put together his second-best scoring performance of his career against the Kings. A poor night at the line (10-for-15) cost Trier a chance to surpass his career-high of 31. Trier’s now had four straight games with 15-plus points. It may be time to start campaigning for another rookie to enter the starting lineup.

In my mind, Mitchell Robinson was the first-round pick. That means tonight’s matchup—in my mind—features a clash of top ten picks. Ayton, as mentioned before, has discovered his defense, making him a massive threat on both sides of the floor. Ayton is very capable of becoming an unstoppable force, which is why Fizdale must turn to his immovable object.

Robinson is not the two-way threat Ayton is, but Ayton is nowhere near the shot blocker Robinson is. Big Meech remains third in the league in blocks with 2.3 per game, while playing significantly fewer minutes than his peers. Fizdale has started to let Robinson run free. His foul trouble remains a concern (he fouled out in 19 minutes last game), but that should have no bearing on Mitchell’s minutes tonight.

Let the two bigs of the future go at it. What else is there to look forward to?