Stay Low and Build: Knox and Ntilikina Need Stints in the G League 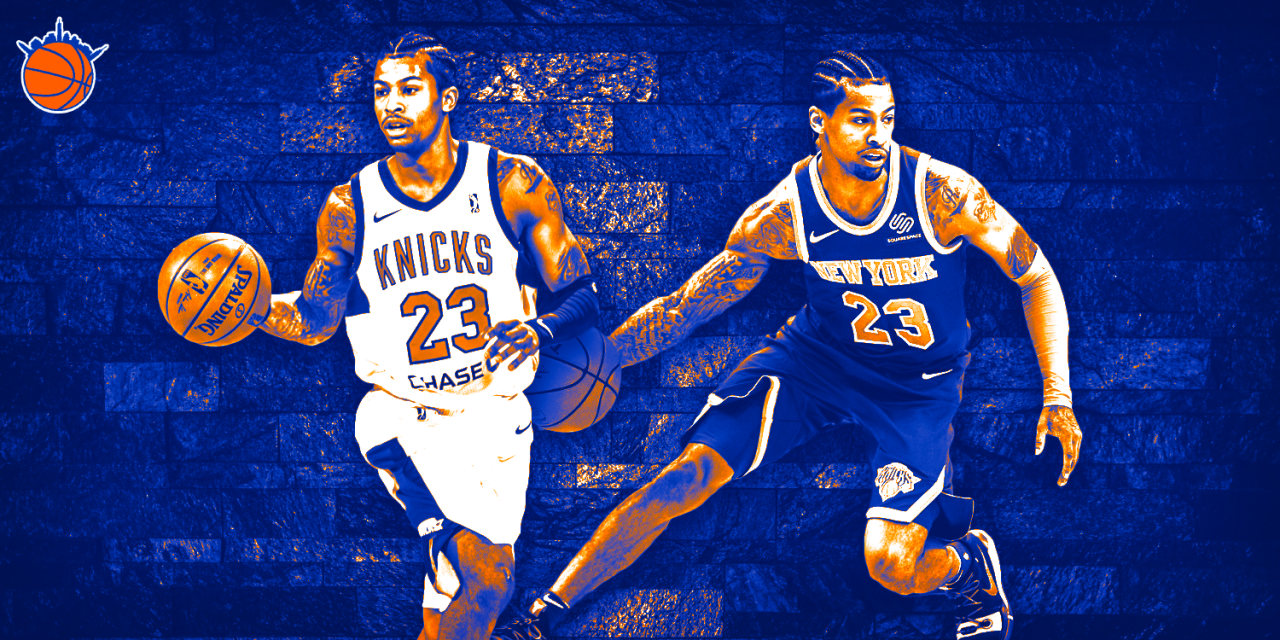 After career nights for Kevin Knox and Frank Ntilikina, the Knicks shouldn’t hesitate to foster the development of their young core players with additional playing time in Westchester.

28 games in and there’s a lot to say about the New York Knicks’ freshman and sophomore classes.

Allonzo Trier has taken the league by storm with efficient scoring and accumulating highlight play after highlight play. Second-round pick Mitchell Robinson picks up blocks like he picks up fouls. Damyean Dotson’s first quarter of the season has mirrored his first entire season: after falling out of the lineup early on, he’s been sensational.

At the same time, reclamation projects are having a resurgence of their own. Noah Vonleh has earned a starting spot and is averaging 8.2 points, 8.1 rebounds, 2.0 assists, and shooting 44 percent from three. Emmanuel Mudiay’s renaissance has been a thing of beauty as well.

All of this progress has led to a difficult question: how can the Knicks sustain so much progress for so many players? Answer: The G League holds the key.

Who Stays Who Goes?

We can break down which players should be sent to the G League by logically thinking about who fits the bill of a long-term project player. Vonleh, Mudiay, Trey Burke and Mario Hezonja are all on their contract year, meaning placing them in the G League wouldn’t do much for their stock as the season gets closer to the trade deadline should the Knicks be inclined to trade the reclamation projects. It would behoove management to use them just as they have: give them one last shot to prove that they’re useful. So far, Mudiay, Vonleh, and Burke have proven themselves to be NBA-caliber players. It remains to be seen if they’ll fit into the grand scheme of the Knicks’ plans, but it’s easy to see who will be offered a contract in free agency based on fit.

As for the others—Knox, Ntilikina, and Robinson—an argument can be made that some of their most important development can happen in the G League.

For a lot of stakeholders in the NBA, a G League assignment is a demotion. Casting a player into the depths of the minor leagues is one step above a contract in a foreign league.

That perception, however, is not true.

Tim Hardaway Jr. held the same opinion before his stint in the G League, but after overcoming the stigma he’d attached, he found it as a positive experience. Clearly there was a reason he was sent there, and the fact that he owned it and strived to improve his game to reclaim a spot on the NBA affiliate shows that development can happen. Burke, a Westchester alumnus, gave high praise to the Knicks development organization.

“It helped me a lot. It helped me more than anything mentally. It allowed me to get back to myself…Get back to knowing myself as a player.”

As Burke said, Westchester can be a place where players find their identity. The comparisons to Minor League Baseball aren’t unfounded—plenty of athletes need time to develop into their niche. In fact, a couple of G League alumni are tearing up the NBA right now.

He’s a few years removed, but don’t forget that Robert Covington went undrafted and began his NBA career in the G League. After four years at Tennessee State, Covington signed a deal with the Houston Rockets and spent most of the season with their G League affiliate. In his sole year with the team, Covington led the team in points and rebounds (per Basketball-Reference). He also won a slew of awards in that season, including G League Rookie of the Year.

It appears that if an NBA-caliber talent is present, he shows himself and in a clear, indisputable way. At the same time, Covington began to define himself as the 3-and-D specialist he had been for the Philadelphia 76ers (and now Minnesota). While playing for the Vipers, Covington averaged 8.5 three-point attempts per game. Needless to say, this was by design and may have further strengthened his long-range shooting ability. Parlaying that skill into a first team all-defense selection and a four-year multi-million dollar contract with the 76ers has been a testament to the possibility of finding underrated talent, but the farm system-like quality of the G League has been overlooked.

Montrezl Harrell, another ex-Viper, has a similar story. Harrell was selected in the second round of 2015 by the Rockets and was assigned to the Rio Grande Vipers for a cluster of games. After the 2015–16 season, Harrell never played another G League game, but it’s clear from the numbers that the big fish, small pond situation from his Rio Grande days was beneficial to him. As a rookie, he was a fringe player averaging nine minutes for the Rockets, but he was “the man” on the Vipers, averaging 17.8 field goal attempts and almost 40 minutes per game. His road to success has been years-long, but his development is showing true dividends this season. He’s averaging 15.0 points per game and 1.6 blocks per game with a 64.1 field goal percentage.

There’s no surefire, empirical way to prove that the G League is the reason for both Covington and Harrell’s success. Nonetheless, the G League has been rebranded and is more heavily invested in than ever before. The Knicks could stand to utilize the development training ground to its fullest potential. Players aren’t sent to minor league teams to be shamed for poor play. They’re sent to minor league teams to sharpen their skills.

Knicks Who Would Benefit

While both Knox and Ntilikina had career nights against the Hornets, it stands to reason that one game does not a career make. Hopefully, this peak will serve as a starting point for a trend to long-term success.

Firstly, Kevin Knox stands to benefit the most from a stint in the G League simply because of how young he is as both an adult and as a basketball player. He’s supremely talented but also incredibly raw. Knox’s indecisiveness shows itself like a rash during games, and he can be easily baited into bad decisions.

His attitude and mental toughness can’t be credibly assessed, but his play already tells a story. He’s made only 28 of his 82 three-point field goal attempts and shooting 35.5 percent on two-pointers (per Basketball-Reference). Often times, he looks for catch-and-shoot opportunities instead of driving to the basket. As a 6-9 forward with tremendous athleticism and a shoddy 34.1 percent three-point average in college, driving to the hoop should be a top priority. Adding the three-point shot to his game is different than relying on it at the highest level of competition.

Knox is still learning the game and being the man in Westchester for a while would serve him well. With a long leash and the ball in his hands, a string of games in the G League over the course of the season could refine his offensive skills, something he’s obviously been struggling with. At the same time, Mike Miller, last season’s G League Coach of the Year, has his team at second in the Eastern Conference standings and first in the league in defense. If the Knicks can develop Knox into an elite threat on both sides of the ball, they’d be all the better for it.

Ntilikina has raked up a few more DNP-CD’s this season than anyone would have liked. Between Mudiay proving that he may be the best candidate for the starting job and Allonzo Trier evolving into a combo guard, Ntilikina is a third wheel in the point guard rotation. Even with Burke out, Fizdale benching Ntilikina due to a lack of productivity wouldn’t be groundless.

Currently, he’s averaging 6.4 points, 0.5 better than his rookie campaign, on worse shooting at 35.9 percent. Any progress that he’s made over the summer is hard to find. He still sparingly gets to the basket and has trouble pushing the ball. Much like Knox, his three-point shot still isn’t falling. Bricking in NBA games doesn’t appear to be helping. His three-point percentage is 29.5 percent so far this season. Ntilikina hasn’t had peaks high enough to allow him a sophomore slump.

FRANK WITH ANOTHER THREE!

Solution? Send him down to develop his offense. Ntilikina had some encouraging moments in Summer League ball. The bit of French Post we saw intrigued me enough to expound upon the idea. It hasn’t translated through the 24 games he’s played. Hopefully, the Swiss army knife (or rather French army Knife) role that Fizdale has given to Ntilikina will be employed by Coach Miller. A stretch of games where Ntilikina can dominate the ball as a 1-3 player could improve the 6’6” swingman’s versatility.

The point guard argument has been talked to death—whether that’s his natural or official position is of little importance. With enough work, time, and strategy, Ntilikina could do it all.

The Westchester Knicks, the Knicks’ G League affiliate, boast an impressive record and notable players like John Jenkins, Kadeem Allen, and Luke Kornet. As a team asset, the New York Knicks should be sending their underdeveloped draft picks down there for lessons on a much smaller stage with much lower stakes. Playing for a G League affiliate shouldn’t have negative connotations. Rather, as Burke put it, it’s an opportunity to learn and improve.