The L.A. Clippers have lost eight straight. How will the Knicks handle Blake Griffin, Danilo Gallinari, and the streaking Clippers on Monday?

Kristaps Porzingis started off the season chasing and making history. He scored 30+ points seven times and set a new career high (40 points). Since then, the King of New York has noticeably cooled off. As the Knicks play host to the downtrodden Los Angeles Clippers, KP is shooting a measly 34 percent over the last few games. He’s going to need to come up big as he matches up against the physicality manifested in Blake Griffin.

Playing at the 4 has been interesting for KP this season. He’s been able to take advantage of the size being guarded by tweeners and on switches, as was the case versus Stanley Johnson. And yet, savvy teams such as the Cavaliers and the Jazz, have been able to disrupt a Knicks’ offense that features KP’s sweet spot. We’ve seen both the double-team deployed to get the ball out of his hands early and we’ve seen his man pull him out to the wing enough to open up the paint. Despite all of the well-produced media of his summer workouts, KP’s core strength is still a blessing and a curse when compared side by side with his counterparts like Blake Griffin or Serge Ibaka.

The Clippers come into the city trying to move on without its All-Star point guard. Milos Teodosic, the 30-year-old passing impresario that was said to be one of the best ball-distributors out of Europe, continues to be sidelined. Ball-handling duties have been left up to Austin Rivers and rookie Sindarius Thornwell while Patrick Beverley is also nursing an injury. While the Clippers seemingly have not lost a step in being one of the league’s potent offenses — they’re still in the top 10 of highest scoring teams — they now lack a true three-point threat. Losing a closer like JJ Redick has hurt the Clippers, evident by their seven game losing streak. The Knicks are right at 35 percent from long distance while the Clippers sit towards at the bottom of the league with the Cavaliers and Thunder. Although guarding the perimeter is a weakness for the Knicks, this is an area where Jeff Hornacek can trot out an all-buckets line-up and be successful at out-shooting the Clippers.

Now that Griffin has added the three-ball to his arsenal and can put the ball on the floor, his twice-a-season duels against KP are made that much more exciting. This means that a good portion of their action will take place away from the rim. In fact, this season, Griffin is getting a higher percentage of his buckets from beyond the arc than KP. That’s likely surprising to read given how much damage we’ve seen Griffin down in the paint in previous seasons and how often we see KP knock down long threes. It’s indicative of how the game is really shifting towards prolific, more versatile big men.

What’s important to look for in this match up is the chemistry Jarrett Jack has developed with KP and timing when he gets the ball. Just over half of his two pointers are assisted, 25 of KP’s shots made have came off feeds from Jack. Jack’s intuition in knowing where to place the ball makes it easy for KP to pull-up from mid-range or back his man down. To be honest, Jack’s skill as a passer is what makes the Knicks’ half-court sets run so smoothly versus the ancient iso-ball. 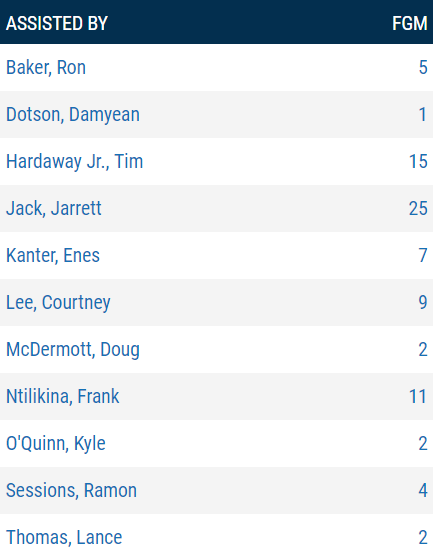 As I mentioned, Griffin is stepping outside the arc this season. A lot. He’s attempted 88 threes through 15 games. For context, Bradley Beal has also attempted 88. Griffin’s former teammate and known sharp-shooter Redick? 84. Griffin is attempting 5.87 threes per game with a greater share of his makes being wide open off extra passes. KP’s important feat tonight on defense will be using that gazelle-like speed we squeal over to close the distance and get a hand up in Blake’s face, something he hasn’t demonstrated total comfort with leaving the paint.

There’s been some talk about KP’s elbow. From his own mouth, the elbow is fine. Every shooter has a slump. The great news is the Knicks are coming off of a weekend of rest. Statistically speaking, this bodes well for the Unicorn. He’s gotten much better at drawing contact so expect to see him get to the free-throw should the game get close.

Things seem to be clicking on offense for the team. But against a Clippers team that fights to snags every board, this has the makings to be one of those trap games. Not only does KP have to shoot better and fight for extra possessions, but with inconsistent play at the 1, tonight would be a optimal time to see the rookie Frank Ntilikina be more involved in the offense. And hopefully, we’ve seen the last of KP’s nagging “elbow” issues.

Knicks Look to Right the Wrongs With Cavs Battle in Cleveland

Knicks Looking to Get Back on Track vs. Hornets