Kristaps Is the Emerging Face of European Hoops

After a sensational performance for Latvia at EuroBasket 2017, could he become the face of a greater legacy?

Kristaps Porzingis had quite the summer.

The first order of business for the young Latvian: quietly act as a catalyst for the overdue removal of stubborn former New York Knicks team president, Phil Jackson. Porzingis publicly protested against Jackson’s inability to do his job by skipping his end of season exit interview, which led Jackson to publicly entertain the idea of trading his young star, which in turn led to Jackson finding himself hastily unemployed.

After indirectly sending the Zen Master packing, KP set about soaking up some shooting secrets from Dirk Nowitzki, the single greatest European basketball player of all time. Both the Big German and the Unicorn played for Team World at the NBA Africa Game in Johannesburg, South Africa, allowing the two seven-foot-snipers to work out together. The 22-year-old student and the 39-year-old master, launching velvet-smooth jump shot after velvet-smooth jump shot.

There was more than a whiff of symbolism to the encounter, a “passing of the torch” type of undertone: one supremely talented European marksman in the twilight of his Hall of Fame career trading jumpers with another emerging talent from Europe, attempting to follow in his idol’s illustrious footsteps.

Fresh off his brush with greatness, Porzingis led Latvia to 5th place at EuroBasket 2017, the country’s highest ever position in the tournament. The Unicorn was dominant, averaging 23.6 points, 5.9 rebounds, and 1.9 blocks per game on a scorching 60 percent shooting from the field (per FIBA). The whole tournament was a sustained masterclass of his effortless shooting stroke, another stage on which to flaunt his potent athleticism.

Porzingis, at only 22 years young, is the face of his professional team and his national team alike. That’s a large load for shoulders so young to carry. The Knicks’ recent history alone, a bad dream on an 82 game loop, has the psychological clout to topple even the most stoic of a skinny 20-something-year-old budding star. Sprinkle onto that the anvil-heavy hopes of home, and you get an idea of the hefty weight of expectation Porzingis carries.

Not that you’d perceive a hint of that weight upon looking at KP, who seemingly takes it all in his long stride. Even as a rookie, he oozed composure on the court, along with an understated calm off the hardwood, which is a minor miracle considering the drama swirling around the franchise before and after drafting Porzingis with the 4th pick in the 2015 NBA Draft. Knicks fans, of course, booed the future of their franchise as he realized his dream and made it to the NBA. Frosty opens have become customary for the New York faithful in welcoming draft picks ever since the franchise passed up on Ron Artest in favor of the infamous Frederick Weis with the 15th pick in 1999.

The boos, in that case, were justified. Artest went on to become an All-Star, and Weis never even made it to training camp. Since then, booing newcomers to the Orange and Blue has been an annual draft day tradition. The front office, of course, has traded away several picks throughout the 21st century, so the opportunity to boo hasn’t always been a luxury afforded to the fanbase. 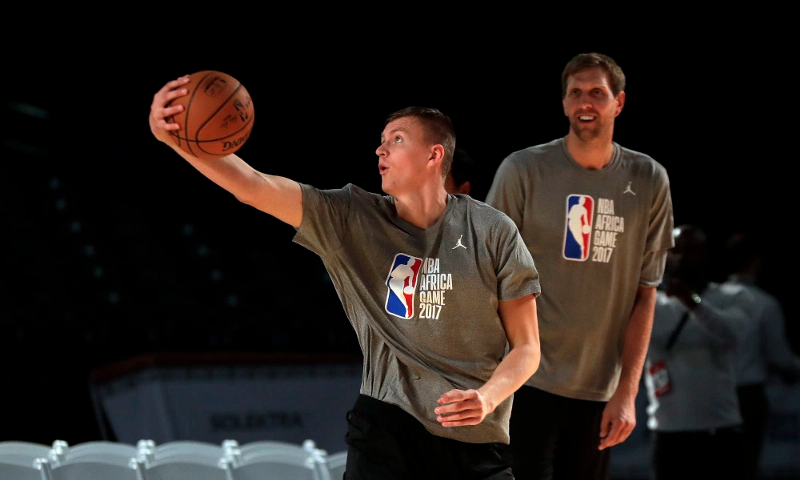 Like Nowitzki, Porzingis’ ability to shoot the ball makes him special, but it’s the rare combination of this offensive weapon existing in the same body that’s able to protect the rim defensively that makes him so valuable a commodity. He is a two-headed, two-way, seven-foot-freaking-three monster. KP is the Unicorn because he can warp the floor spacing on both ends, stretching the court on one end and simultaneously shrinking it on the other.

A summer spent in the gym has added much needed muscle to his matchstick frame, and invaluable time spent with one of the greatest isolation scorers of all time to develop a go-to move should lead to improvement in the two most obvious flaws in his individual progression. Perhaps equally important will be the absence of the two primary external hindrances to his game last season: the Triangle Offense, and shoot first, second, and third point guard Derrick Rose.

The upshot: the scene is set for a breakout year from KP, who is undoubtedly now one of the frontrunners to become the face of the European basketball movement. EuroBasket 2017 may well be the watershed for the transition from the previous standard bearers of European basketball. There is a vacuum to fill, and why shouldn’t Porzingis be the man to fill it?With the last batch of European superstars–Marc and Pau Gasol, Tony Parker, and Dirk Nowitzki –in the twilight of their careers, the torch is there to be grabbed.

The primary caveat to an outright declaration of Dirk’s young doppelgänger as his successor, the official coronation of Kristaps as the face and future of European basketball, actually has nothing to do with KP or his individual candidacy, but with his fierce competition for the crown.

Giannis Antetokounmpo of the Milwaukee Bucks is a Greek 22-year-old athletic anomaly. Sometimes playing point guard, but more accurately described as a point-everything, Giannis is probably the most versatile player in the world not named LeBron James. At 6’11”, armed with gargantuan hands, a seven-foot-three wingspan, and the ability to euro-step from locker room to a layup, the Greek Freak is already being discussed as a dark horse for MVP of the league this season. Giannis controversially missed EuroBasket this summer with an injury, and thus has yet to truly make his presence felt in international competition.

Nikola Jokic, the 22 year old Denver Nuggets’ big man from Serbia, is already an offensive maestro, and one of the best centers in the NBA on that side of the floor. The Joker has legitimate point guard vision and an organic flair for impossible on-point passes. He scores in the post and has range to the three-point line, and is going to be the fulcrum of a reborn Nuggets offense. Jokic decided not to compete in EuroBasket this summer to rest for the upcoming NBA season, but he had success for Serbia in international competition at the 2016 Olympics, winning a silver medal.

Luka Doncic, of Real Madrid and Slovenia, will soon be in the conversation as well. The 18 year old, 6’ 7” combo-guard was outstanding at EuroBasket, averaging 14.3 points, 8.1 rebounds, and 3.6 assists per game. The teenager has an all-around game with no real weaknesses, an incredible feat for one so young. His main strength is his natural feel for the game, in addition to an ability to rise to the occasion regardless the size of the stage. He’s projected to be a top 5 pick in next summer’s 2018 NBA Draft.

Time will tell if anyone can distinguish themselves from within this generation of transcendent European talents, but Porzingis has emphatically continued on his trajectory to stardom this summer. Carmelo Anthony proudly represented the United States on the Olympic stage during his tenure in New York, and now Porzingis is shaping up his career trajectory to include usurping the Knicks leadership mantle and becoming the face of Euro hoops. Given that the Unicorn has gone from draft night disappointment to being handed the keys to New York City in only two seasons without so much as flinching, there is no reason to doubt that Porzingis is–and maybe always has been–more than ready.