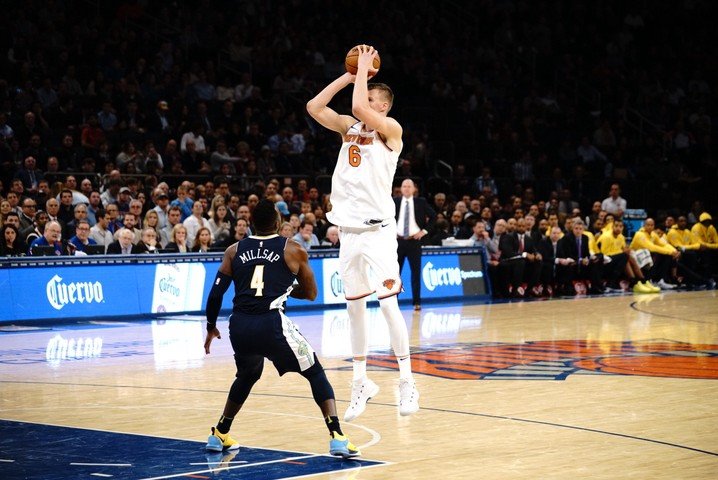 KP continued his hot play as the Knicks came on top over the Denver Nuggets, 116–110.

As the star of the New York Knicks, Kristaps Porzingis will have many statement games. In his freshman year as the leader of the pack, the squad will take their cues from him. When he comes out with energy and even a slight braggadocio, his teammates will fall in line as well as keep feeding him the ball. That’s exactly what happened tonight.

It’s interesting how the league picks and chooses which players will become nemeses based on age and the position they play in their franchise’s future. Denver Nuggets’ center Nikola Jokic has been called by many a top 20 player in the NBA today. There are surprisingly a lot of people who even argue that he’s better than Porzingis. With this being their first meeting with both as the undisputed alphas of their squads, KP made sure to quell those beliefs. Mijo set a new career-high in scoring with 38 points, making this his fifth game of 30 or more points. No Knick has ever done that. Crown him King!

The Knicks came out hot in the first half, lead by KP’s barrage of exclamation shots. Connecting off assists from Jarrett Jack (more on this later) and Courtney Lee, KP was in another zone from beyond the arc. A couple of his shots inside, like this, were very Melo-esque; proof that the mentorship left an indelible mark on moving the needle in KP’s offensive growth.

It’s too too too easy for KP. pic.twitter.com/rTgYVP7Qdy

At times, I’ve been confounded by Hornacek’s substitutions and the timing of them. I think he has gone to the bench unit too early at times. Tonight, versus a subdued Nuggets frontcourt, it worked in his favor. Kyle O’Quinn checked in first and clogged the paint, giving Paul Millsap and Jokic fits around the rim. In the first half, the Knicks’ swarming defense held the Nuggets to just 12 points in the paint. They pushed the lead to 22 points at the half.

It seems like third quarters are the Knicks’ kryptonite. Out of the locker room, the Nuggets went on a 18–2 run, thanks to Gary Harris getting those looks that his team deemed worthy of a fat new contract. On the other end, the Knicks could have used some stick-em. TWELVE turnovers in the third quarter allowed the Nuggets opportunities to chip into the gap.

Tim Hardaway Jr., on the heels of a big night in Cleveland, took awhile to warm up. But once he did, he helped finished what KP started — scoring 13 points in the second half and redeeming his +/- to a -1.

This was a really fun game, and it’s awesome that KP got to set a new career-high in front of the home crowd. The Knicks are 3–3, hold a winning home record, and have one of the NBA’s premier scorers donning their colors. Let’s enjoy this moment!