For Kristaps Porzingis, Karl-Anthony Towns Is a Cautionary Contemporary Star 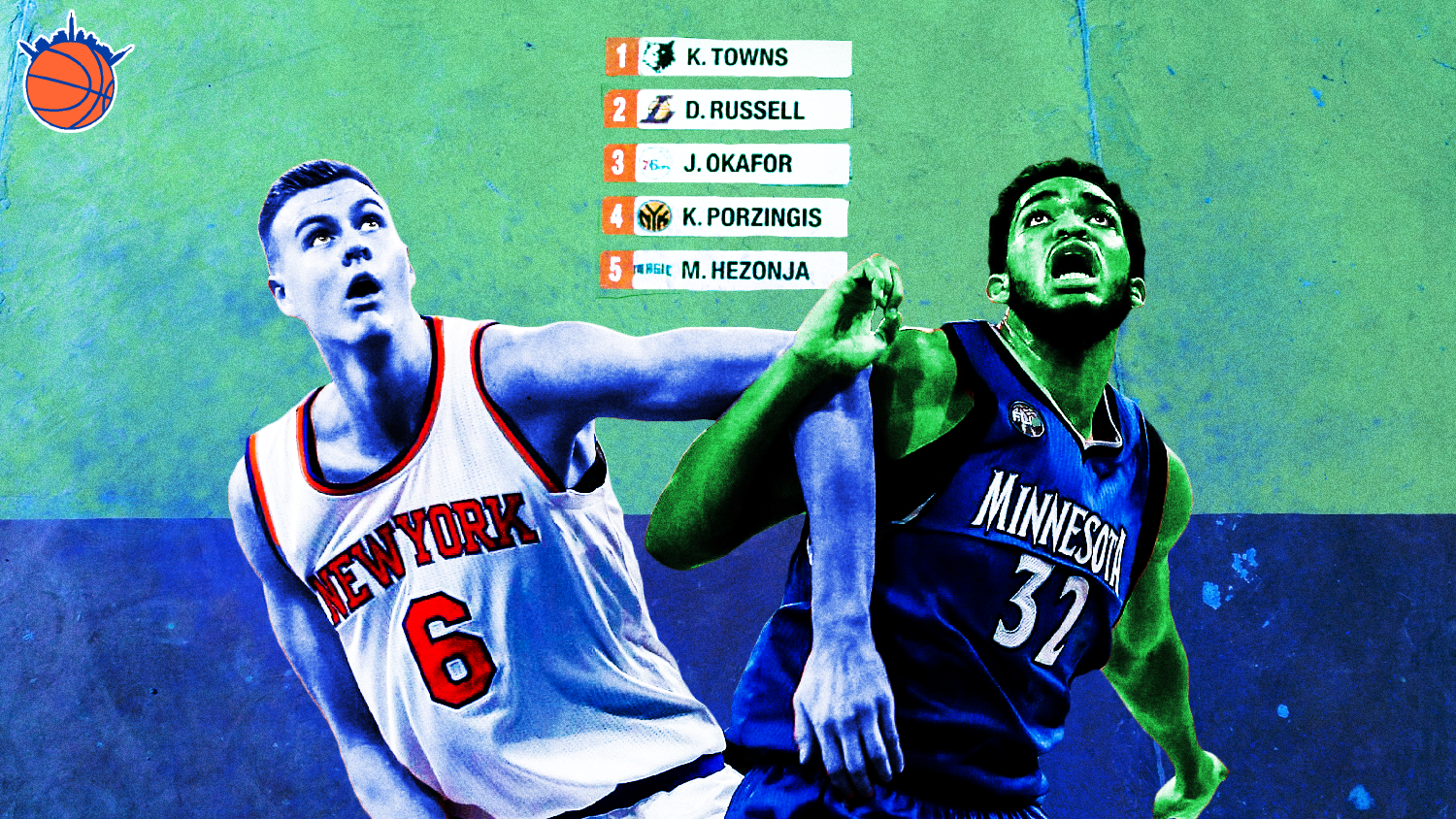 Despite being sidelined this season, Kristaps Porzingis’ star is rising while Karl-Anthony Towns’, in a shaky Minnesota situation, is fading.

As Jimmy Butler strolled into Wolves training camp, doused the place in gasoline, and lit a match, Knicks fans may feel relieved it wasn’t another New York “Kazoo” moment.

The Butler saga could have easily been the plot to any Knicks season since 2000. Hell, we saw a PG version of this with Carmelo vs. Phil Jackson. For two decades, dysfunction has been the calling card for the Dolan Knicks. Sexual harassment from executives, point guards going AWOL hours before games, star players skipping exit interviews—we’ve seen it all.

Dysfunction made it impossible for the Knicks to build any semblance of a winning culture, and the team has been without a homegrown superstar since Patrick Ewing.

It brings to mind Karl Anthony Towns. When Tom Thibodeau took over as the Wolves’ head coach, Towns was relegated to a back seat on the 2011 Bulls Revival Tour. He’s been the biggest loser of the recent training camp fiasco, which may have had something to do with his eight-point season debut.

Towns’ predicament is a cautionary tale of the path down which Kristaps Porzingis and the Knicks were heading before Jackson was relieved of duty. Two of the best players from the otherwise fool’s gold 2015 draft class, and two of the best young big men in the league, KAT and KP’s careers will forever be tied together.

Three years ago, it was Towns who was put in the best position to succeed. The Wolves gave him a mentor in Kevin Garnett and a talented number two in Wiggins to grow with. The results were promising, and with Towns as the focal point, the center from Kentucky put up strong numbers—18.3 points per game, 10.5 rebounds, 1.7 blocks, 55.5 effective field goal percentage—and took home Rookie of the Year honors.

While Porzingis was given a mentor in Carmelo Anthony, he was thrown into the mix on a win-now team instead of being allowed to grow on a young team in transition. Despite not being the go-to offensive option on his team, KP managed to put together a promising rookie campaign, highlighted by tip dunks and blocks. He averaged 14.3 points, 7.9 rebounds, and 1.9 blocks with a 46.7 effective field goal percentage.

Four years later, the tables have turned. Porzingis is now at the center of his franchise’s resurgence. Scott Perry and Steve Mills have insulated him with a player’s coach, young pieces to complement his game, and, most importantly, have made Porzingis feel like the biggest piece to the puzzle.

Conversely, Thibodeau has done nothing to insulate his rising superstar. Between Wiggins, Towns, and Gorgui Dieng alone, next season the Wolves have 59.6 percent of their cap ($70,983,843 in base salary for 2019–20) tied up. If Butler gets the max he has politicked for, this will be their team for the foreseeable future.

That puts Towns in a precarious position. His role has somehow decreased since the arrival of Butler amid a slew of other veterans Thibodeau signed. Instead of building the offense around Towns’ potential to be a terror down low and stretch defenses up top, Thibodeau has relegated him to a third banana role. On opening night, Towns had the same amount of fouls as shot attempts: six.

If the Wolves stay on their current course, it’s plausible Towns may be the one asking to get out.

To a lesser extent, the Knicks and Porzingis arrived at a similar crossroads when Jackson attempted to shift to win-now. Derrick Rose and Joakim Noah were brought in, and KP was knocked down to third in the scoring food chain. This led to Porzingis skipping his exit interview, which in turn led to Jackson’s demise.

Perry and Mills have done a phenomenal job ensuring Porzingis that he is their cornerstone. For example, during their pre-draft process, Perry and Mills asked Wendell Carter Jr. how he thought he fit alongside Porzingis.

Every addition has been made to amplify KP’s strengths. Kevin Knox has the potential to be Porzingis’ right hand man in a one-two punch. Mitchell Robinson possesses similar rim protection potential, and can evolve into his defensive anchor at center. Allonzo Trier is NOS in the human form, and has sixth man potential at the bare minimum.

Fizdale has released the shackles Jeff Hornacek kept on Frank Ntilikina, unlocking a new role for Frank as defensive menace on the wing. Regardless of what position he is playing, you can bet on Frank corralling the opposing team’s best player, making Porzingis’ rim protection a much easier task.

The strong relationship between the team and KP’s camp has eased anxiety regarding his extension. Mills asserts that Kristaps is comfortable speaking up when something bothers him.

Knicks president Steve Mills said on @TMKSESPN that deciding not to sign Kristaps Porzingis to an extension was the best long-term decision for the franchise and will be the best decision, in the long-term, for Porzingis: pic.twitter.com/MI12Vne3Kw

David Fizdale has only built on that rapport. He has praised Porzingis for the energy KP brings to practice and the film room. “He’s been awesome to have in the gym,” Fizdale said. “It’s like having another coach. The film sessions, he speaks up as much as any coach on our staff, and what he says is exactly what we need said.” Fizdale’s infectious positivity and emphasis on player empowerment also opens the door for the team to make legitimate runs at superstars like Kevin Durant.

A year or two ago, none of this was possible. The Knicks were stuck in a win-now rut, despite being gifted a player to build around. Now it’s Towns who has been thrown to the wayside, as his head coach chases the glory days like a 40-year-old frat boy. Fans should thank God this isn’t another Knicks story.