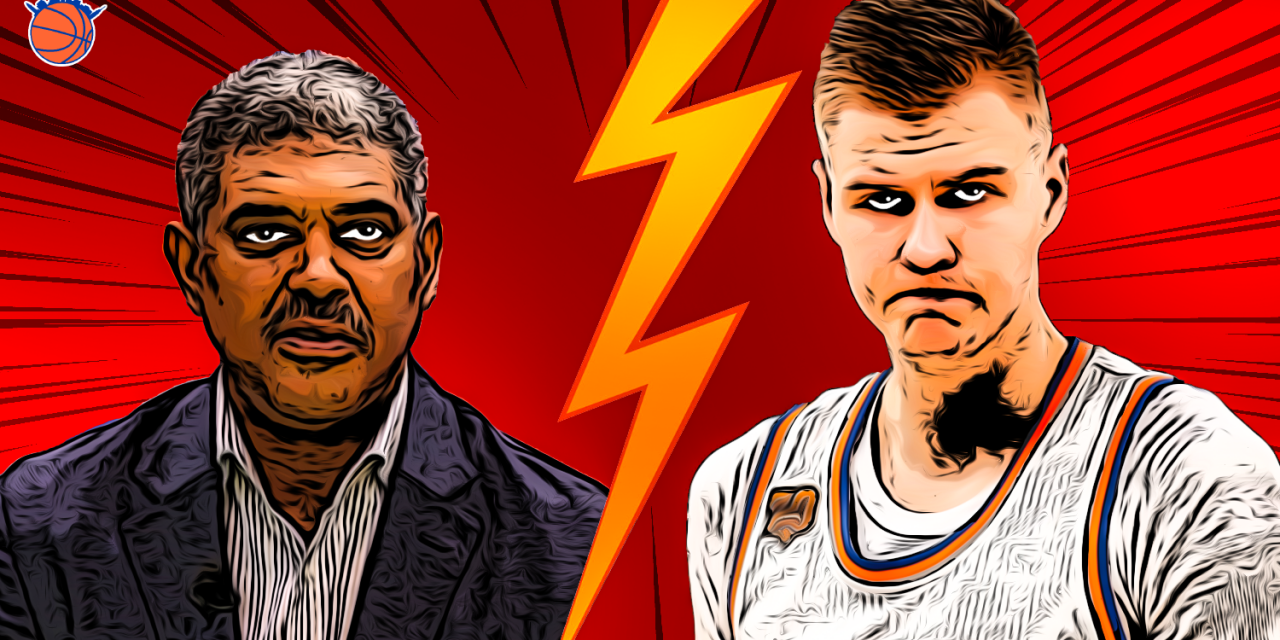 While Knicks leadership is earnest in making Kristaps Porzingis the cornerstone of the franchise, it’s evident that the two sides — player and management — haven’t gotten along at every turn.

Growing up in Latvia, Kristaps Porzingis looked up to Carmelo Anthony and Allen Iverson. He even went as far as to braid his hair into cornrows, as documented in the now famous photo of him as a kid.

Then he grew to be 7’3” and has been on of the leaders of the new wave of centers who play like guards. Those days practicing Iverson’s crossover and Melo’s jump shot paid off, but fans have wondered recently if the Unicorn may have picked up a few less desirable traits from his idols.

On Nov. 8, Coach David Fizdale told reporters that Porzingis has yet to begin sprinting after tearing his ACL last February. Hours later Porzingis posted a photo of him doing just that on Instagram.

One can understand why Porzingis was eager to correct the record. He’s a star who’s watching his team struggle while he sits on the bench; additionally, the fact that he wouldn’t be sprinting nine months after the injury would be worrisome. For example, Chargers wide Receiver Keenan Allen was sprinting four months after suffering the same injury. Allen is more than a full foot shorter than Porzingis, but the idea that Kristaps would be five months behind him in his recovery would be disturbing.

The issue is twofold. There’s been a breakdown in communication between Porzingis and the Knicks if the coach isn’t aware that his star player is running again, and that Kristaps make Instagram the medium through which he revels this fact.

This isn’t the first time that Kristaps and the Knicks haven’t been on the same page. While in the past the two sides have always appeared to be able to work through any conflict, should he continue to be the focal point of the team’s rebuild these things are at least worth chronicling—lest things spiral out of control and end like Iverson in Philly, or like Anthony in Denver.

Both of Porzingis’ idols had unceremonious falling outs with their first teams. Hopefully these flare-ups aren’t a sign of a larger dissatisfaction with his situation in New York.

While not exactly pertinent to his time with the Knicks, Kristaps and the Porzingis family showed no hesitation is utilizing all the power they had to ensure he did not end up in Philadelphia.

Adrian Wojnarowski reported, back in his Yahoo Sports days in 2016, that Kristaps’ camp, “Didn’t make it easy for Philadelphia to draft Porzingis at No. 3. The Sixers wouldn’t be afforded Porzingis’ physical, nor get a private workout, nor even a face-to-face meeting.”

Players should be allowed to influence the path of their own careers, but this was an early sign that Kristaps would be willing to go against management if he and those around him thought that’s what would be best for him. It’s a pattern that’s continued through his Knicks tenure.

At the end of the 2017 season Porzingis skipped his exit interview with then-President Phil Jackson. Jackson responded by saying that the team is listening to calls from other teams about Porzingis.

Again Porzingis used what leverage he had to send a message to a team’s front office, reportedly that he wanted Coach Jeff Hornacek out.

Now we’re talking about an exit interview, not a game. Not even a practice. Yet Jackson, who apparently forgot all about Shaquille O’Neal skipping his exit meeting in 2003, took issue with Kristaps’ decision.

Porzingis proved once again that when it’s a choice between a star player and a coach—or an executive in this case—the player will win, and he did so by once again deciding to shut out a front office.

With Jackson and the Knicks splitting during the summer of 2017 and Hornacek fired after the 2017–18 season, Porzingis’ plan worked—or at least didn’t backfire. This past offseason, while not marred by any standoffs between Porzingis and the franchise, did see a bit of drama over his rookie extension.

By not signing their young big man, the Knicks will have an extra $10 million in cap space to use in the pursuit of a free-agent star. That means Porzingis will be a restricted free agent at season’s end. While it’s nearly impossible to believe that the Knicks wouldn’t match any offer made by another team, their refusal to hand over a max offer could rub Porzingis the wrong way.

Had he not torn his ACL last season, there’s no doubt that the ink would be long dry on an extension—the Knicks do have total control of whether or not they bring Porzingis back or not. But now there’s a window open which Knicks fans would rather have slammed shut as soon as last season ended.

The charitable assessment of this latest flare up between the two sides is that Porzingis, a 23-year-old star, can’t wait to get back to his team after having to stay off the floor for longer than he has ever been away from the game. A pessimist would see it as yet another breakdown in communication between team and player.

A series of minor disputes could snowball, and it would not be the first time that disfunction had derailed a promising Knicks team. Alone, none of these incidents would raise any major red flags, but together they’re less than encouraging.

There are certainly much worse things than a player withholding medical information during the draft process, skipping an exit meeting and contradicting his coach on social media. But with restricted free agency looming, fans could be forgiven for feeling a bit uneasy about the situation.

It’s likely to end up being much ado about nothing. The Knicks will offer Porzingis a lot of money, and he’ll be back for the long run. He may have more run-ins with the front office, but he’s just as likely to mature into the leader the franchise is counting on him to become.

Of course, winning would go a long way in keeping everyone happy.