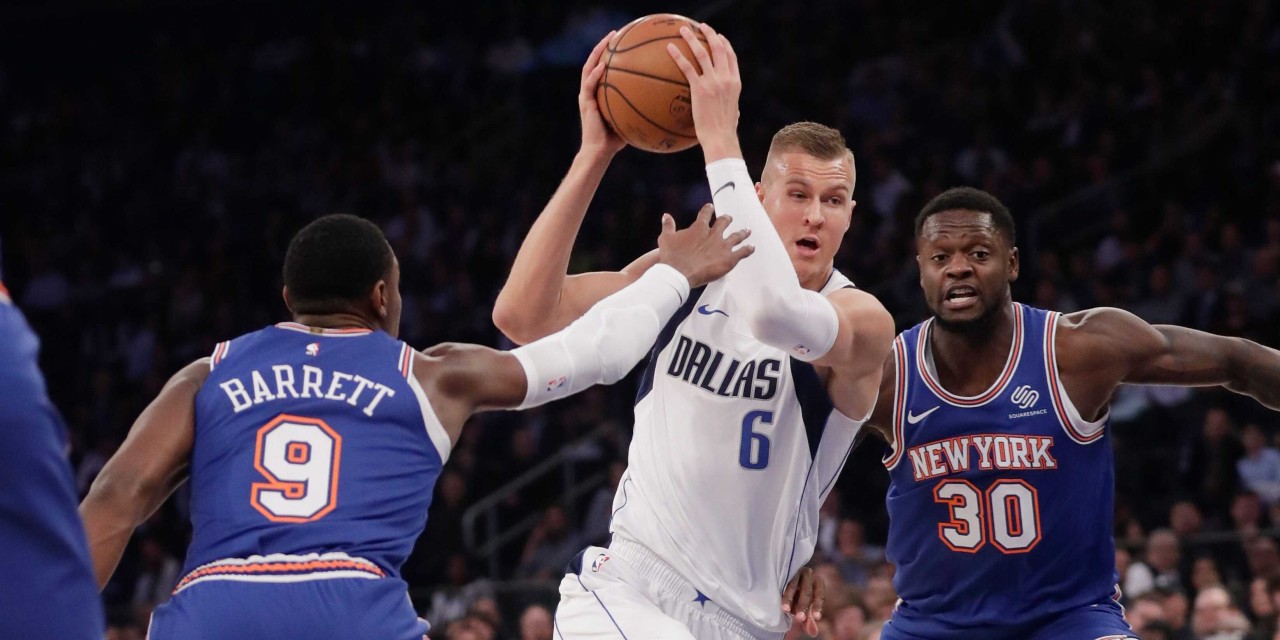 Knicks fans vilified Kristaps Porzingis in Thursday’s home win, raining down boos to mask the insecurity of the team’s future without him.

NEW YORK — 10 months after a franchise-changing trade saw the Knicks sign off on losing an All-Star, Kristaps Porzingis returned to Madison Square Garden to a cacophony of boos. The Garden is not unfamiliar with booing players, especially opposing players, but Thursday’s wrath was flavored with an especially vibrant spice: betrayal.

Thursday night may have been the loudest the Knicks will hear from fans this entire season. It’s primed to be another disappointing one despite Knicks brass claiming to be content with last summer’s free-agency haul, and fans came out with a singular purpose: to boo a former franchise centerpiece who decided he didn’t want to be their star anymore (that’s one way to interpret it). Although the Knicks picked up the win—their second against Dallas in six days, representing two of their three total wins through 12 games—the moment was a greater, shared event between fans who showed up especially to heckle a player they were celebrating over a year ago.

Here’s the Mavs being introduced. The KP boos were near deafening pic.twitter.com/4QysW8spCd

Knicks fans don’t have too much to hang on to other than hope, and even that is in short supply between Seventh and Eighth Avenues, so Thursday’s reckoning for an ex-‘Bocker was a group effort to deride an easy target. Porzingis has walked back the idea that he did not want to be in New York—a January 2019 morning meeting with Knicks brass quickly spiraled into a trade with the Dallas Mavericks before the end of the day—but one thing led to another, and the once-favorite Latvian son of New York wanted out the door, not trusting the direction the franchise was going in anymore.

After the close defeat, a sober Kristaps Porzingis, having faced a barrage of jeers moments earlier, opened up about the game, which shifted from on-court product to exorcising a demon in the shape of an NBA big.

Per Steve Popper in Newsday:

“I don’t know if it’s fair or not,” Porzingis said. “It’s what they know. It’s what they heard, the fans. I don’t think about that too much. It is what it is. … I wouldn’t say it affected me. I heard it of course. It was pretty loud. But I tried to play my game and stay focused and not think too much about what is going on.

“It doesn’t matter. I’m not going to try to win them over now. It is what it is. I understand where they are coming from. Whatever happened is in the past. I just want to win games. It was loud. But as I said, it was cool. It’s good. It’s cool.”

Until the 2019–20 NBA season started, there was no way to evaluate Porzingis’ full value. The Mavs had signed the 24-year-old to a max contract in the offseason with zero, real-game experience in his new uniform. Mark Cuban’s team trusted that a European connection with Rookie of the Year Luka Doncic would be fruitful (Doncic finished with another triple-double against New York), and that Porzingis’ health would be secure after missing the entire 2018–19 season. Porzingis stepped on the court for Dallas in October, twenty months after suffering an ACL tear when the Knicks hosted the Milwaukee Bucks in February 2018.

That was the last time Porzingis played in a Knicks uniform, too—and it happened on the Garden hardwood that was viewed by thousands of concerned fans not nearly as intoxicated as they needed to be to fully experience the course of franchise history that be altered before KP played basketball again.

"I don't know if their reaction is fair or not. It's what they know, it's what they've heard. It is what it is" – Kristaps Porzingis on the boos he heard at MSG pic.twitter.com/YJTPbHxbax

Flash forward nearly two years and KP is on the losing end of a Garden crowd erupting for a game-winning shot that sunk the Mavs.

“It was a different level,” Marcus Morris, who hit the go-ahead three-pointer in the final minute, responded to the noise factor on Thursday. (He called his shot his “Knick moment.”)

“They do what they do,” second-year center Mitchell Robinson said when asked about the fans booing. Robinson returned after missing several games due to a concussion. He scored 16 points on eight shots and collected eight rebounds before fouling out in 22 minutes. “They didn’t boo us, so that’s a plus,” Robinson answered when posed with how the hostile home environment against a familiar face impacted the team.

Knicks fans, we were told, vociferously booed Kristaps Porzingis another time, too; at the 2015 NBA Draft. Under the tenure of team president Phil Jackson, New York had their highest first-round pick since Patrick Ewing in 1985, and they spent it on a little-known European commodity. At the Barclays Center, it appears as though Knicks showered the seven-footer with jeers. It was Porzingis’ first real taste of the Big Apple, a place where it’s not easy to earn undying devotion.

So, Thursday was not KP’s first public booing, he’s used to it in a way, but it was the first time he experienced the pure spite that thousands of Knicks fans (it was a sellout at 19,812, with plenty of Mavs and Doncic fans sprinkled in) can possess, and the type of betrayal they felt when the organization dealt a young star-in-the-making, who reportedly did not want to help bring New York out of its competitive stupor.

“We’ve got great fans,” the much-rumored Knicks head coach David Fizdale said after the win. “We’ve been on the other side of those boos, too. They showed a great appreciation for our effort.”

But Porzingis, ultimately, is not the reason the Knicks are 3-9, despite fans’ mocking; he’s not the reason the team hasn’t reached the playoffs in six years; and he’s not the reason it’s difficult to envision a road to contention for the current organization given the brewing management upheaval or lack of star talent. He is, however, Public Enemy No. 1 for fans who want to experience catharsis—the kind of catharsis that sports normally reserve for buzzer beaters or intense contests but instead have to fall back on vilifying unintentional actors caught in the crossfire between playoff-hungry fans and an unrelenting franchise that repeatedly shoots itself in the foot.

Porzingis finished with a double-double in the loss, and although he expressed disappointment in the Mavs’ inability to pick up the W, it was hard to notice an upset tone in his voice—a new scar from the no-love-lost atmosphere at the Garden. Knicks fans were able to laugh at Porzingis’ weakness in the form of back-to-back victories over him and his new team, but in the aftermath they have to face the cruel, uncertain future of a franchise that doesn’t have KP and doesn’t have a sure star. Just because Porzingis didn’t want to be here, doesn’t mean the Knicks are better off without him. Die-hards’ collective and emotional reaction to the former fourth-overall pick was an attempt to make fun of the past, while even they will admit the waters ahead are no less safer in spite of Porzingis.