Kristaps Porzingis Returns to the Garden in Knicks, Mavs Clash 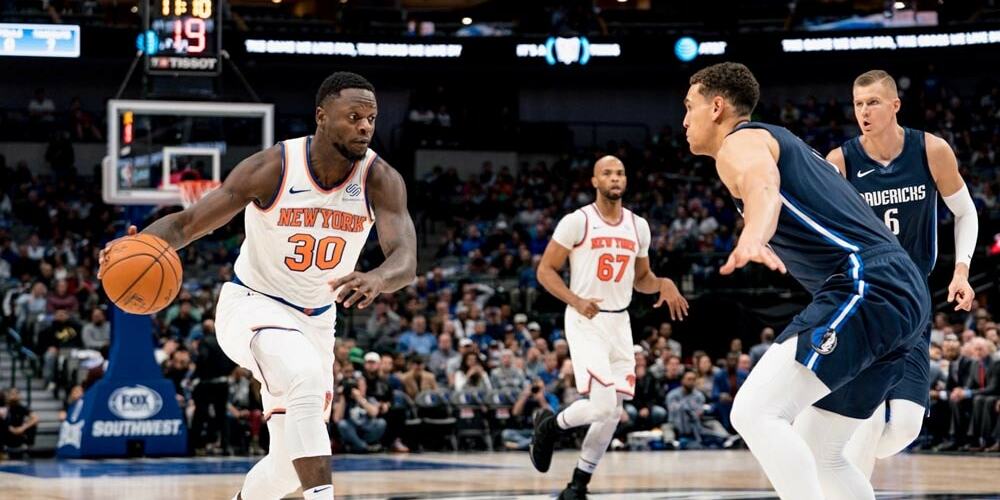 The Knicks rematch with the Mavericks at home one week after beating them, but this time it brings Kristaps Porzingis’ unruly return.

It was all good just a week ago.

Well, not exactly, but the New York Knicks did win the Kristaps Porzingis revenge game, taking one on the road against the Mavericks to break a four-game losing streak.

Since that win, the mood has changed, and the lopsided losses to the likes of Cleveland and Chicago quickly halted any opportunity to build up momentum after that win against Dallas. It did, however, bolster talks and rumors of David Fizdale being fired. Despite the chatter, nothing officially has happened yet.

Regardless of where you stand on Fizdale’s future at his current position, he won’t be public enemy number one on Thursday night, as Madison Square Garden welcomes back Kristaps Porzingis for the first time since the trade.

The Knicks (2-9) have an early rematch with Dallas, seeing the Mavericks less than a week after that road win. Thursday night’s game against New York will be the last of a three-game road trip for the Mavs. Since that loss to the Knicks, the Mavericks bounced back with a win over the Memphis Grizzlies, but most recently lost to the Boston Celtics.

Thursday night’s game is slated to tip off at 8:00 p.m. ET from the World’s Most Famous Arena.

It won’t be a fun homecoming for Porzingis. While he may have said after the loss to New York that he thinks it’ll be a mix of positive and negative emotions from Knicks fans, it’s more likely to be a hostile environment for Porzingis. It’s been one of the most anticipated games for the Knicks, with fans donning the orange and blue tuning in if they’re not going to be there in person.

After sitting out last season due to injury, it doesn’t look like Porzingis has missed a beat. So far this season, he’s averaged 18.3 points, 7.9 rebounds, and 2.4 blocks per game. He’s converted on 40.1% of his shots overall, knocking down 37.5% of his takes from long range. He had 28 points on 11-of-22 shooting, with nine rebounds and five blocks in the previous meeting with the Knicks. He did almost get posterized by Frank Ntilikina, who will possibly have another chance to complete the jam this time around on Thursday night.

Porzingis has formed a solid one-two punch with another Euro star in Luka Doncic. Doncic is averaging close to a triple-double thus far, with 28.3 points, 10.3 rebounds, and 9.1 assists per game. He had 38 points, 14 boards, and 10 assists, but eight turnovers in the previous matchup with the Knicks. Also keep an eye out for another former Knick in Tim Hardaway Jr., who’s the third-highest scorer with 11.6 points per game as an asset off the bench.

You can’t expect your rookie to bring it every night, but after a little two-game slump against Dallas and Cleveland, Barrett got back on track with a solid performance in the most recent loss to Chicago, where he had 21 points, six rebounds, and a career-high nine assists. He was one of the few bright spots in an otherwise ugly loss to the Bulls.

Barrett wasn’t really a factor in New York’s win against Dallas, scoring only three points on 1-of-9 shooting. He did have eight boards and four assists, though. Expect Barrett to have a much bigger impact this time around with the home crowd around him.

Mitchell Robinson is listed as questionable for Thursday night’s game. Robinson has been in and out with a couple of injuries so far this season, but this time around it’s for a concussion. The Knicks will need his defense up front, and his absence tends to make the gap more noticeable.

However, it appears that Fizdale is looking to deploy Taj Gibson more and more, especially in Robinson’s absence. Gibson looked solid against the Bulls defensively, and he hit a few shots. While he might not have the athleticism to deal with Porzingis or other Dallas bigs up front, Robinson’s absence and how the Knicks deal with it will be crucial.

»LISTEN: The Knicks Wall Podcast: Shockingly, things are bad for the Knicks