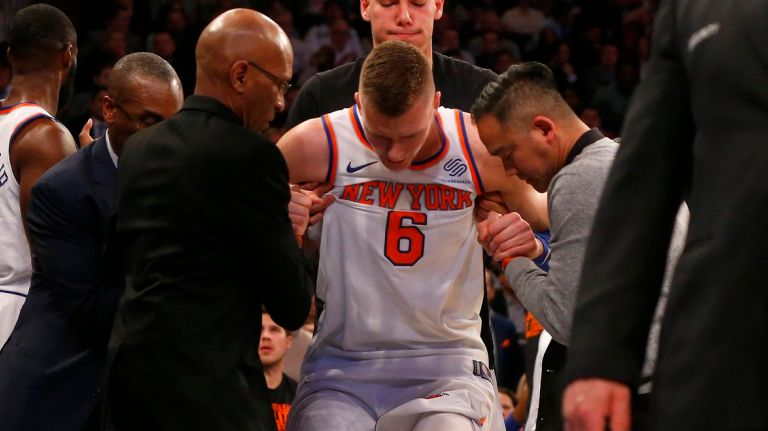 Kristaps Porzingis hurt his knee after landing awkwardly in the second quarter.

After pulling off a massive dunk over Giannis Antetokounmpo, Kristaps Porzingis came down and hurt his knee. He had to be helped off by teammates and coaches. The Garden dropped completely silent, the kind of silence that comes over an apprehensive crowd in dire circumstances. The latest from the Knicks is that he is getting an MRI and will not return:

Kristaps Porzingis (left knee injury) will not return and is undergoing further evaluation.

He was able to put weight on it as he left the floor, and felt somewhat alright when heading to the hospital for the MRI:

Kristaps Porzingis was walking on his own and described as "OK" as he went to the hospital for an MRI on his left knee, per league sources.

As far as the actual injury goes, it was a whirlwind of emotions. Dunk, elation, injury, sadness. Here’s a look at the dunk:

Kristaps with the filthy dunk, lands and hurts his leg.

Had to be helped off the court. pic.twitter.com/rjBWCkgjQv

And here’s a look at the injury:

Nothing graphic, but an awkward landing for sure.

We’ll update as more information is made available.

UPDATE: 11:00 P.M. Our worst fears have been realized. The Knicks have confirmed that Porzingis has torn his left ACL, ending his season. Get well soon KP.