The Kristaps Porzingis Trade Was Never Plan A — But What’s Plan B? 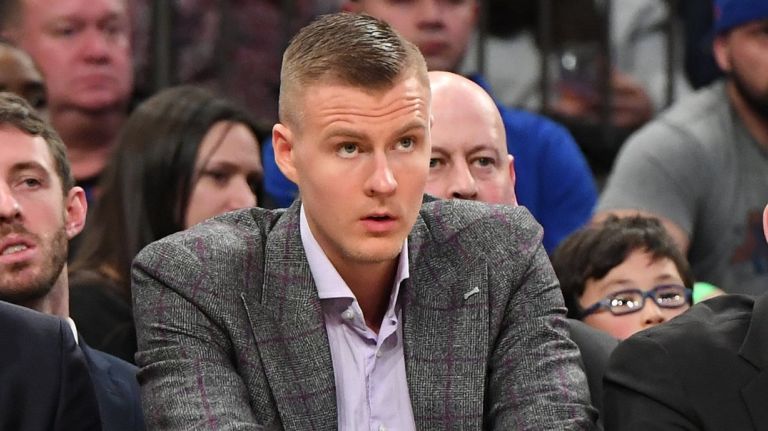 Knicks general manager Scott Perry is liquefying assets to better the team’s situation in the short term after the Kristaps Porzingis trade.

Normally a team trading their star player — like how the New York Knicks sent Kristaps Porzingis to Dallas on Thursday—signifies a new era of rebuilding. The Knicks don’t seem to be doing that, however.

There’s warranted speculation that Jordan and Matthews will be off the Knicks’ roster soon enough, but general manager Scott Perry will look for trade destinations for the two in addition to Turkish center Enes Kanter (who has been out of the rotation save for a garbage-time appearance versus, ironically, Dallas last Wednesday and Friday’s shorthanded loss). ESPN’s Ian Begley reports the expiring veterans New York acquired may be bought out if no suitable trade is reached before the deadline.

In essence, the Knicks traded away their 23-year-old budding star returning from injury to liquefy their current assets.

Other players on the team include mostly prospects; Frank Ntilikina, Damyean Dotson, Kevin Knox, Mitchell Robinson, and Allonzo Trier. These players range in age and perceived ceilings, but it’s unmistakable to put two and two together—the addition of Smith Jr. and multiple picks, plus the Knicks possessing their own future first-round picks implies Perry and Co. preparing to part with assets to swing for a deal before Thursday, or even in the summer.

There’s absolutely no reason for a team to possess all their first-round picks and another team’s picks—and a roster of young talent—without the intention to use these assets as bait. That begs the question, what are the Knicks waiting to use these assets for?

The answer probably closely resembles a deal for a player on the trading block by Thursday, or a sign-and-trade during the offseason so a player can re-sign with his current team for the max while coming to the Knicks.

Perhaps that sounds a bit conspiratorial, but it’s evident Perry and the Knicks have a very fringe-NBA roster at the moment and the organization has lottery hopeful, happy thoughts in mind to draft first overall and at worst stay in the top five.

Further, the Knicks’ plan to find new homes for Kanter, Jordan, and Matthews before Thursday’s deadline. The team could foster expiring contracts from teams looking to dump salary packaged with an asset or young player (think: D’Angelo Russell and Timofey Mozgov to Brooklyn).

This would all be advantageous for New York to make room for a Wild West amount of open salary cap space available in the upcoming offseason to sign not one but two max-level players to the team. Right now, the Knicks are gambling with an incredibly stacked deck against them, hoping they can allure top talent to the barren team with two max spots available for star players to buddy up in the Big Apple.

Even before Porzingis was dealt, there were persistent rumors that the Knicks were all-in on trying to lure Kevin Durant from the reigning champion Warriors. The Knicks employ former teammate and close friend Royal Ivey as an assistant coach. Trier’s ties to Durant exist, too, as Trier played high school ball in Oklahoma City during KD’s tenure in the Sooner state. It’s rumored the Knicks could offer a front office job to Durant’s close confidant and business partner Rich Kleiman, who tweeted in 2018 that he’ll, “run the Knicks one day.”

Imma run the Knicks one day

In a piece for The Athletic, Sam Amick detailed how Durant and Kyrie Irving were still in the cards for New York—possibly better suited to throw the bag at the pending free agents. Irving appears to have backtracked from his promise to Boston to re-sign as well.

Newsday‘s Barbara Barker tweeted Irving speaking to the media, quoted saying, “I respect the Knicks organization. Obviously, they are making moves to position themselves for the upcoming summer.”

If those weren’t enough breadcrumbs for you, Durant liked an Instagram post from SLAM magazine sharing the Daily News‘s Stefan Bondy reporting another Irving comment from Friday, that he doesn’t “owe anybody shit” with regards to his current team.

Besides Illuminati theories, the Occam’s Razor explanation for the Durant-Irving connection is the Warriors’ two-time NBA Finals MVP quite literally “liking” the sentiment expressed by Kyrie. In other words, it’s somewhere between mastermind Danny Ocean heist and Joel Embiid internet trolling.

Anthony Davis is an option, too, for New York. The six-time All-Star named the Knicks alongside the Lakers as “preferred” trade destinations, per Shams Charania of The Athletic.

Perhaps related, Davis’ father, Anthony Sr., was quoted by ESPN’s Ramona Shelburne as devastating Boston for disloyalty to Isaiah Thomas. It’s not finalized by any means, but at least publicly Davis’ family denounced Boston as a target.

.@espn just ran this to close out SportsCenter. A text from Anthony Davis' father per @ramonashelburne: pic.twitter.com/MnUSL4JrdY

This could be the most perilous and terse time to be a Knicks fan. Without a bona fide free-agent signing or two in the summer—and that’s still months away—it feels like a low point in the franchise. New York is swinging for the fences, and the Kristaps Porzingis trade is the walk-up tune portending a 0-0 count with stars like Durant, Irving, and even Davis on base.