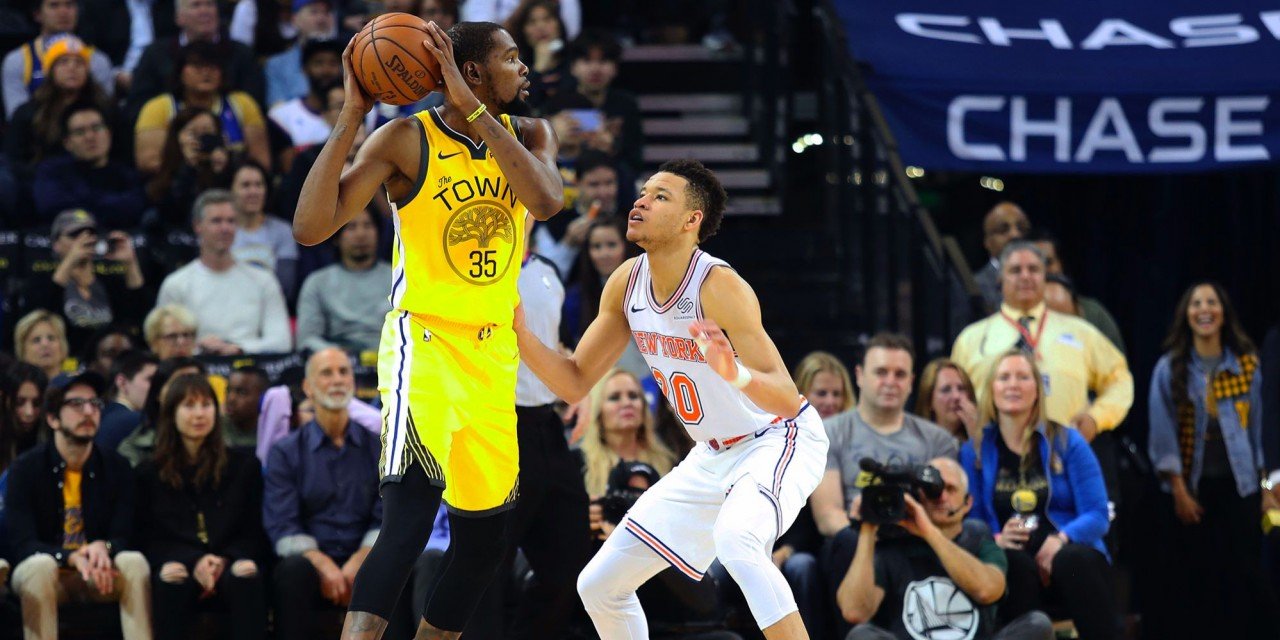 The Knicks have backed themselves in a corner with the Kristaps Porzingis trade. Can any remaining trust or hope in the front office last if a star doesn’t sign with the team this summer using the immense cap space created?

The Knicks have spent the past seven months preaching a new regime is a dawn of a new era for New York Knicks basketball. And for the first time in eons, fans bought the notion.

The front office, and newly minted head coach David Fizdale, were given a hall pass for this season, allowing them the freedom to use this season for trial and error. With Porzingis out the whole season and Zion Williamson in the draft, losing didn’t sound like the worst thing in the world.

Then, in a span of three hours on a Thursday afternoon, we were reminded the Knicks will always be the Knicks. Kristaps Porzingis, along with Tim Hardaway Jr., Trey Burke, and Courtney Lee were sent to the Mavericks in exchange for Dennis Smith Jr., Wesley Matthews, DeAndre Jordan, and two future first-round draft picks, in what will go down as one of the wackiest days in team history.

It may not have been that Porzingis—considered the only tangible asset the team had—was dealt, but how quickly the deal was made. According to Mike Vorkunov of The Athletic, the Knicks had already been talking about trading Porzingis. The now infamous meeting between Porzingis and Knicks brass lasted fewer than five minutes, according to ESPN’s Ian Begley, and was more of a confirmation that the front office should proceed with their plans to move on.

New York will always have a special place in my heart.
Grateful for everybody who made this journey so special for my family and I. pic.twitter.com/q923ul3Wk4

In a vacuum, the trade is not as horrible as it sounds. Dennis Smith Jr. is not a 7-foot-3 unicorn, but he is 21-years-old, and some in the organization have liked him since 2017. When Phil Jackson was let go it was leaked that not everyone was on board with the Frank Ntilikina pick; was DSJ the preferred choice? If so, they finally have their guy.

Smith Jr. immediately becomes the best guard on the roster. His score-first mentality should mesh well in Fizdale’s laissez-faire system. A backcourt of Smith and Frank Ntilikina—assuming Frank is not traded before the deadline too—is an intriguing prospect the team can now experiment with.

Wes Matthews and DeAndre Jordan  are expiring deals at the worst—useful mentors for the young guys at best. The two draft picks are a good haul, but will likely end up in the 15 to 25 range if Porzingis and Luka Doncic are as electric a duo as they are forecasted to be.

Thursday’s blockbuster reinforced that the Knicks have no plans for a slow rebuild—they want to go big name hunting this summer. The top priority all season has been accruing cap space for a run at Kevin Durant and Kyrie Irving. That was the case when Joakim Noah was hastily stretched earlier this season, and even more the case now with Hardaway Jr. and Lee—whose deals were a hindrance to max cap space—off the books.

It also puts Steve Mills’ ass in the jackpot. He essentially punted on mending the fence with his current franchise player for the opportunity to lure one guy away from the greatest team of all time and another from a stable organization with a better current cast of players than New York’s.

If you think you’ve seen this gamble before it’s because you have; Magic Johnson (who Mills worked for from 2009 to 2013) made a similar leap of faith when he traded D’Angelo Russell to move dead money. Luckily for the Lakers it worked out, vis a vis LeBron James, and Mills better hope it works out for him too, otherwise his head should be on a spike.

Mills has been the Littlefinger of MSG, surviving more than a decade’s worth of losing. Do not forget it was Mills who was part of the brain trust that signed Hardaway Jr. and Lee in the first place; in the case of Hardaway Jr., that was Mills acting alone. He survived plenty, but he can not survive a summer that does not bear two star players.

He must be aware of the pressure. In the aftermath of the trade, in typical fashion, Knicks PR shifted the blame to the player. The spin surrounding KP’s exit is he suddenly didn’t want to be here.

“We started to get a feel, we could see that he wasn’t completely buying into what we were trying to do,” president Mills said in a conference call following the trade. “And again, we wanted a confirmation from him whether he was completely in or out. He made it clear to us when he came in to meet with us that he no longer wanted to be part of our group.”

Reports were that the team had already been in talks to move on from Porzingis. These reports were confirmed by Perry and prove that something else was going on.

Were Mills and Perry growing weary KP’s brother/agent Janis asking for too much input? Do Perry and Mills have a confirmation from someone in Durant or Kyrie’s camp the duo will come if two slots are available? Did Mills just want to rid himself of anything associated with Phil Jackson? Did KP not trust Fizdale was the man to lead this team to winning basketball?

These are the questions that will be answered as details come out. For now, everything is on Mills.

The Knicks are a mortal lock to finish in the bottom three of the league. Had this been any other year, you could pencil Zion Williamson into next season’s starting lineup. But with the new lottery odds the Knicks still hold a 86 percent chance of not landing Zion.

In the event they do land the rights to Zion, could Mills parlay that good fortune with newly acquired draft picks to make a compelling package for Anthony Davis?

Whatever Mills decides to do he, needs to think big. He has been able to escape plenty in his tenure, but entering next season with zero stars is something even James Dolan can not tolerate.