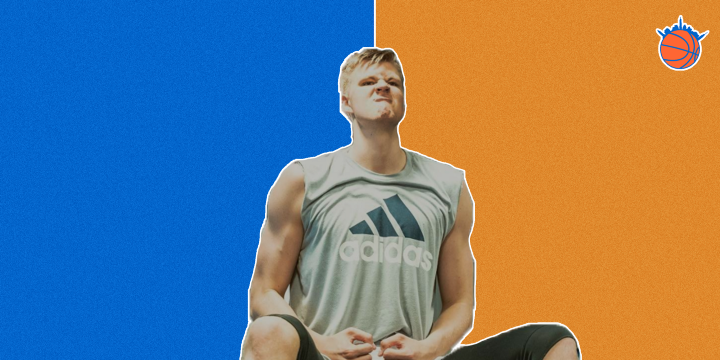 Guest contributor and free agent Joseph Nardone pens a reflection of the Knicks fan mindset before the season.

The year is 2066. A man and his young son are gazing at a landscape riddled with nuclear fallout. Things have changed since the War of Peons in 2018 but much has remained the same. Here, one true constant, the knowledge passed down from one generation to another, is about to happen.

“What is that father?” the boy asks.

The father-son duo allows their eyes to wander over to see what was once considered a mythical beast. With radiation ravaging the planet, horses have gone the way of the dinosaurs, yet a new creature has emerged to flourish in the hellish Earth terrain.

“Son, that is a unicorn,” the father replies. “When I was your age, we called it a Kristaps Porzingis.”

With Carmelo Anthony now gone to greener pastures, and Phil Jackson sipping some booze out of a cup with an umbrella hanging out its side, there are no longer individuals a New York Knicks fan can easily place blame.

It is still the same flawed roster. The ownership remains in the hands of a guy as inept at roster construction as he is at creating music. And yet, because the fan base can’t help but love this debacle of a franchise, there are relatively high hopes for the Knicks this season.

Relative in the way kissing your cousin is a win, that is. The tanking can’t be stopped, although there is a silver lining in the otherwise gloomy NYK cloud.

All of that hope, naturally, rests on the shoulders of Kristaps Porzingis.

It makes sense. A seven-foot-everything unicorn can do that to a group of fanatics. While the term “unicorn” has since become overused and often tossed around without appropriate attachment, Kristaps does fit the bill. He is unique in nearly everything he does, especially when coupled with his size.

Coming off his sophomore campaign, the numbers are all pointing to inevitable greatness. Last season saw the Latvian average all the pretty counting-stats: 18.1 points, 7.2 rebounds and 2.0 blocks per game. As impressive was his efficiency, as he shot 45 percent from the floor and 35.7 percent from beyond the arc (per Basketball-Reference).

If a sunset is our parents’ truest expression of beauty, a Knicks fan would instead argue it is some large human from the across the Atlantic blocking shots, then getting back in transition to hit a 30-footer.

Regardless of how New York functioned as a squad last season, and with conscious disregard for the overall record, Porzingis offered hope to the hopeless. A walking, fully functioning human embodiment of what the Knicks can be if things worked in their favor.

All of that hope, naturally, rests on the shoulders of Kristaps Porzingis.

To be crystal clear: Porzingis is already good. That needs to be said, loudly. He has, unfortunately, been operating in the same realm as former New York Knicks saviors. A land as devastated as the (semi-)fictional futuristic landscape mentioned in the beginning, being the direct result of incompetence begetting itself in the front-office.

That’s the context. It is also the calm before the inevitable storm.

With no one left to share — or, more honestly, take the brunt of — the blame, it is officially Kristaps’ team. There’s no ‘Melo, hoodied or otherwise, for fans to trounce upon when things go sour. There isn’t even a poorly aging man trotting about behind the scenes to lambaste with mean tweets. There is merely Porzingis.

There’s also, obviously, James Dolan too. That being said, he isn’t going anywhere. Nor will basketball experts on the mean streets of Twitter call for his head on a stick when the Knicks shoot under 40 percent from the field on a random Tuesday evening. It’s just our beloved, neighborhood friendly Unicorn.

He will still begin the season with the benefit of the doubt on his back. A city and fan base yearning for a yesteryear that hasn’t actually existed for most of their lifetimes will want to provide it for him. The last time people remember the Knicks being competent was in the 1990s, but it has been even longer since the franchise was earnestly fighting for NBA titles. But after all, without KP, there is no hope for a better tomorrow.

Hope, in all ventures, is the greatest commodity anyone could have, primarily if that venture is currently downtrodden.

It doesn’t matter if it is the NBA, or a guy who got laid off from an industry he loves (hi), or the billion other scenarios, if there is hope, there is optimism. If there is optimism, a certain level of shit can, and will be, eaten by those who want to support the venture.

However, given the years it has spent the Knicks to go from promising young team to Carmelo’s baby, to “please get ‘Melo out of there,” to promising young Porzingis, to now it being Kristaps’ team in full, and everything that came well before all of that, the level of patience asked for things to turn around can never be realistic.

Patience is a virtue and all that jazz, but when you’ve walked the planet for a few decades and your strongest memory of an NBA franchise is its most famous player of the modern era missing a layup, you can’t do anything but forgive those no longer wanting to play for tomorrow — or tomorrow’s tomorrow and the day after that.

Look at the roster. Go look at it. Instead of dropping the names of mostly transitional players on it, go take a gander for yourself. I’ll wait. …

You see that? Did you notice how, objectively, it isn’t exactly formed for success? I’m more likely to finally land a date with Christina Ricci than the Knicks are to battle near the top of the Eastern Conference.

Removing New York Knicks sympathizers from the conversation — the kind who claimed Joakim Noah was a steal and Derrick Rose was still a star — any realist could surmise what awaits when the season begins on Thursday evening. A tanking so hard, Sam Hinkie is likely changing his underwear due to the excitement it brings the former bringer processes and trusts in Philadelphia.

It is with that knowledge the fan base should operate. That, no matter what the record looks like at the end of the season, as long as there appears to be growth in his game, Kristaps Porzingis is still the same guy he was last season. The bringer of hope. The bearer of a better tomorrow. A pearl necklace worn around the necks by the NYK faithful, given, not acquired. The future, operating now, even if the now is still as awful as the yesterday.

Years are going to pass before any resemblance to a quality team in New York is assembled. Like it was for his predecessors, Kristaps is not to blame. His perception will likely be a direct causality as a result of others’ incompetence, but it shouldn’t.

Know this going in; let it wash over your body like a cold shower after drinking one-too-many vodkas and sleeping with something you’re unsure is human. You will need this perspective as the season grows longer in the tooth.

Only bad awaits. Then again, only if you’re predetermined to paint the picture that way. Kristaps can be your Unicorn for as long as you allow him. Don’t lose that.

No matter what the record looks like at the end of the season, as long as there appears to be growth in his game, Kristaps Porzingis is still the same guy he was last season.

“What is a Kristaps Porzingis?” the curious boy asks his father.

“Everything that was right with this world once upon a time,” the father replies.

The son pulls a hoodie over his torso, with JD and the Straight Shot music floating in the background, yanks out his rifle to take aim at the unicorn.

“No, son,” the father stops his son, “Allow that unicorn to prosper. Just let him be…even if only for another winter. No one knows how many we have left.”

Joseph Nardone has been covering college basketball for nearly 10 years. He is old. He also almost made it. Then he was laid off by the big bad industry that does not love him as much as he loves it. Follow him @JosephNardone. Oh, he’s also not a Knicks fan.