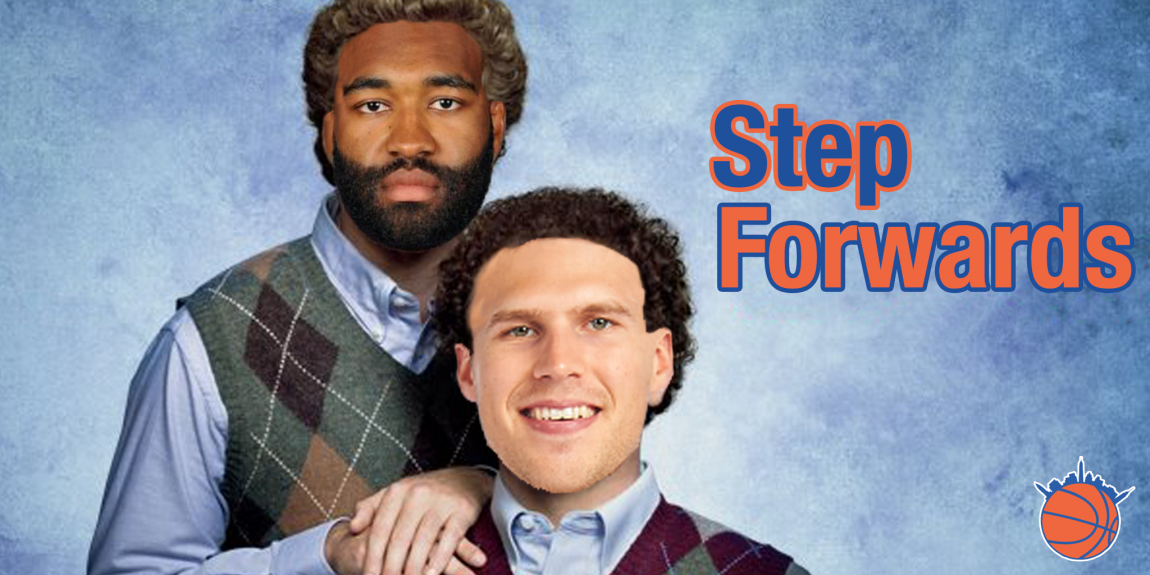 The two Knicks reserve forwards have been a joy to watch together. What has made them so great?

Picture it: the day is September 25, 2017. Doug McDermott is traded, along with Enes Kanter, to the New York Knicks. McDermott, a bit apprehensive to be coming to the biggest city in the United States, hops off the plane. He meets with his Knicks teammates. Kristaps Porzingis daps him up. Joakim Noah screams in his face. Ron Baker goes in for the strong, firm handshake. And then, at the end of the line, comes Kyle O’Quinn.

One: a college star at Creighton, one of the best scorers in NCAA history. The other: the face of one of the greatest upsets in March Madness history, leading Norfolk State over the Missouri Tigers in the 2012 NCAA Tournament. Both had their moments before they came to the NBA, but neither had found their true Bluejay or Spartan, if you will. McDermott immediately senses a connection, and knows that these guys are destined to be best friends. They are: the Step Forwards.™ (I know Kyle O’Quinn plays center sometimes, but it’s 2017, basketball is position-less.)

The rapport between Kyle O’Quinn and Doug McDermott has been evident from day one. When on the court together, they’ve blitzed other second units. Among Knicks duos that have shared the court for at least 370 minutes, O’Quinn and McDermott lead the pack in net rating, with lineups featuring them outscoring the opposition by 5.2 points per 100 possessions. They’ve also done an incredible job at making their connections efficient:

Kyle O'Quinn has thrown 78 passes to Doug McDermott this year, 20 of which have ended up in a Dougie bucket/a KOQ assist. McDermott shoots 81.5% on attempts from O'Quinn.

THE CHEMISTRY IS PALPABLE

Since I tweeted that, O’Quinn has thrown McDermott six more passes and McDermott has missed five of those attempts. Never tweet out statistics, folks.

Either way, their sets are simply a vision of beauty. Jeff Hornacek and the coaching staff have made a concerted effort to provide every opportunity for them both to do what they do best. This is the set that the Knicks run the most to generate looks at the rim for Dougie:

Watch this play and follow along with me. Here’s what the Knicks do:

If any McDermott highlight video during his time in New York is perused, then a play just like this will be found nearly every time. Ben Falk over at Cleaning the Glass covered all of that here. While this specific set is the bread and butter for the couplet, it’s not the only way the two connect. Invariably, McDermott’s strongest skill as a Knick has been his work off the ball, and his innate ability to convince defenders he’s going to accept screens when he never had any intention of doing so:

There’s something to be said for being able to trick defenders like this. KOQ follows McDermott the whole way, waits until the perfect opportunity arises, and drops the dime in for the easy finish.

Here, with O’Quinn beginning the possession above his normal sweet spot at the elbow, McDermott manipulates the defense gorgeously to finish the possession off with an exclamation point:

Michael Carter-Williams gets overzealous in defending the ball, and O’Quinn instantaneously realizes where to throw the pass. McDermott reacts to the aggressive defense, goes to the hoop, and O’Quinn leads him down the yellow brick road to the hoop. Simply beautiful. Best Duo of 2017? A-Rod and J-Lo, step aside.

Both players are arguably having the best seasons of their career. O’Quinn is averaging a career-high in points, assists, rebounds, and effective field-goal percentage. We’ve seen O’Quinn do many of the things that have endeared him to the New York fanbase, with his propensity for passing and tenacious effort as discernible as ever. McDermott is averaging a career high in effective field goal percentage as well, and while his counting stats may not be at maximum levels for his career, it’s safe to say this has been his best year thus far. His shot profile is a thing of beauty, with 36 percent of his shot attempts coming at the rim, ranking highly among wing players, per Cleaning the Glass. In addition to finding plenty of looks at the rim, Dougie also ranks in the upper third percentile of wing players in corner threes, and has shot an impressive 54 percent on those looks. Many of the skills that made McDermott a legend in NCAA lore were hidden from the NBA crowds for the last three years, but they’ve come out of the woodwork this year to remarkable results.

The best duo on the Knicks has buoyed a bench unit that has had to go through some growing pains. With a 19-year-old rookie captaining the second unit, there was always going to be times when the bench would struggle. However, the play of O’Quinn and McDermott’s strong play has been as consistent as Migos repeating the end of their lines. Long separated, and now together harmoniously, the Step Forwards could be separated again if the Knicks aren’t able to resign Dougie. For the rest of the season, though, let’s sit back and enjoy the subtle stratagem of McDermott’s cutting and the remarkably shrewd tendencies of O’Quinn’s passing that form our favorite pair this side of J.R. Smith and Steve Novak.