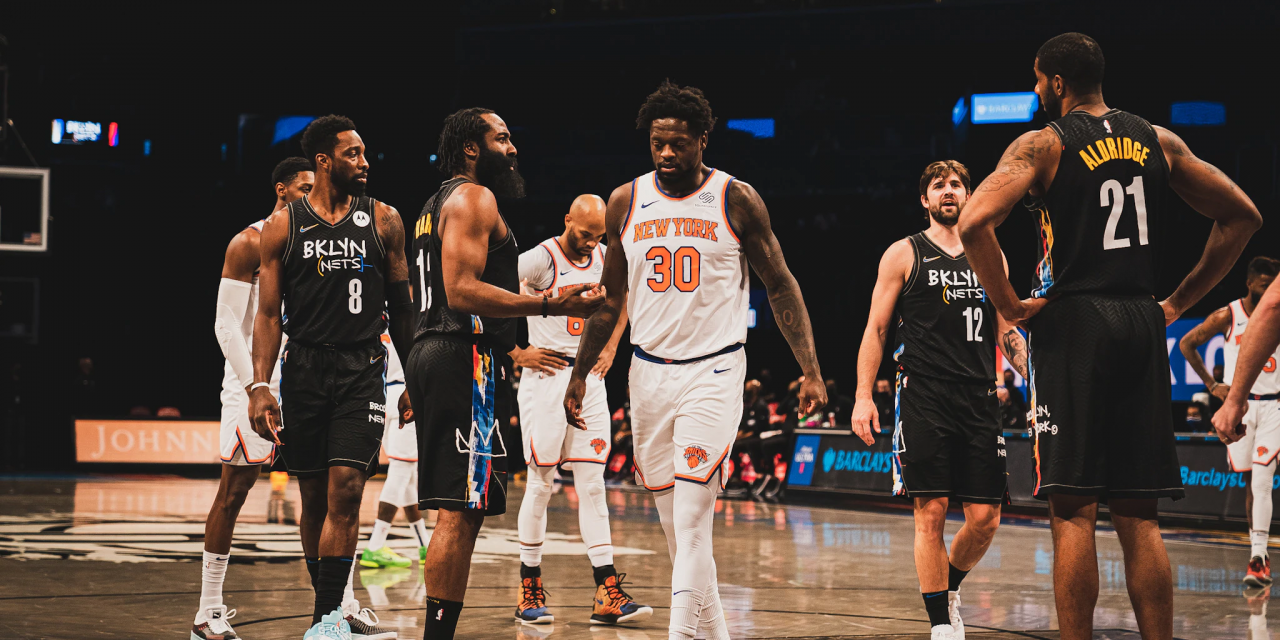 A triple-double from Julius Randle and stellar performances from R.J. Barrett and Reggie Bullock were not enough as Kyrie Irving’s 40 points carried Nets over Knicks.

The Brooklyn Nets (35-16) defeated the New York Knicks (25-26) by a final score of 114-112. For New York, Julius Randle finished with a triple-double: 19 points, 15 rebounds, and 12 assists. Reggie Bullock finished with 21 points and 5-of-10 from the three-point range. On the other side, Kyrie Irving carried the Nets with 40 points and seven assists. Joe Harris assisted Irving with 16 points and 2-of-3 shooting from the outside.

Despite Kevin Durant being out for the second straight matchup, there was a palpable buzz for this matchup. The last time the Knicks and Nets played, New York had one of their more memorable regular-season games, taking the Nets down to the final moments before losing. Randle was fed up by the end, R.J. Barrett had some big moments as the lead dog, and Immanuel Quickley received his first start. What did the Knicks have for an encore?

The first half saw New York struggle to start offensively, specifically Randle and Barrett. Both started off 4-of-10 but the Knicks remained in the game. The frontcourt duo of Nerlens Noel and Taj Gibson cleaned up on the glass, while Reggie Bullock’s outside shooting kept New York in the game. Then, James Harden left the game for the Nets, aggravating a hamstring injury that bothered him recently.

New York pounced on Harden’s absence with a 17-6 run to close out the first half. Randle, struggling to put the ball in the basket, went into creation mode, finishing with eight assists in the first half and finding Bullock for several threes. This run, however, was inspired by Derrick Rose. The veteran point guard dropped 15 in the first half on 6-of-8 shooting off the bench, driving to the rim, and putting constant pressure on Brooklyn’s defense.

The second half saw the Knicks with a big lead and looking comfortable to start. Randle clinched his fourth triple-double of the season, Barrett knocked down a couple of threes, and the New York appeared to be on the road to clinching another win. That was until Irving went off, finishing with 10 third-quarter points and even got his teammates some good looks, thanks to his ability to bend the floor with his scoring.

A big 15-2 run in the third from Brooklyn turned a double-digit lead by the Knicks to a small Nets lead heading into the fourth quarter. The Knicks looked lethargic on both ends and Brooklyn jumped on them. Irving and Harris started the job, but Brooklyn’s role players like Jeff Green and Alize Johnson got good looks by attacking New York’s defense.

The fourth quarter was more about Brooklyn maintaining momentum. The Knicks struggled throughout the quarter on both ends—struggling to get anything from Rose and Randle, while Irving began to impose his will and terrorize New York’s defense. Barrett had a few good offensive possessions—a three-ball, a drive-and-kick, and a nice fadeaway shot to keep New York in it. Still, the Nets continued to pester New York’s interior defense throughout the game, while Irving and Harris kept pressure with outside shooting.

67 first half points compared to 45 second half points. Tale of two halves.

Regardless of whether you support the idea of a Knicks-Nets rivalry, this was a tough game to drop against one of the best teams in the Eastern Conference. To see Brooklyn lose Harden in the first five minutes of the game, the thought should’ve been to attack, and the Knicks did. Building up a double-digit lead wasn’t the problem, rather, the lack of any defensive pressure. The Knicks offense didn’t do any favors with untimely floaters in the lane and no real offense to speak of, but the defense allowed Brooklyn to do just about anything they wanted.

Not going to lie; I’m not loving the things I’m seeing from the Knicks lately, even with the win over Detroit the night before. Let’s move to the game notes.