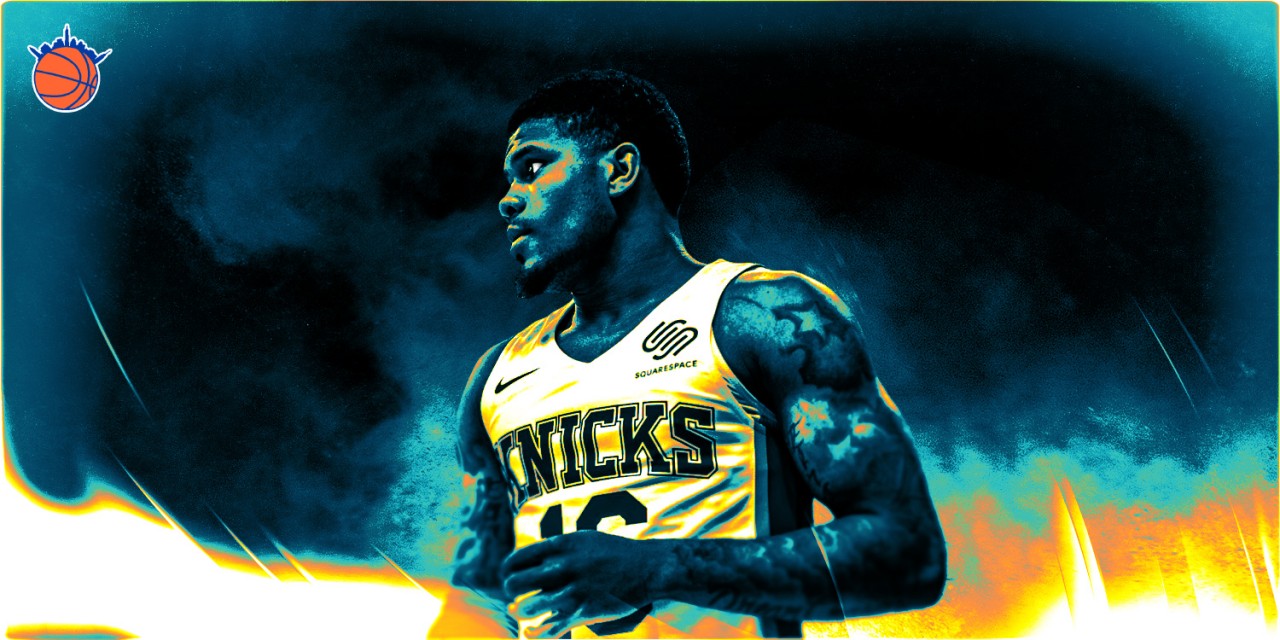 Former Summer League invite Lamar Peters has been playing well in the G League, spurring interest to call him up to the Knicks.

The Knicks are a team with few strengths and many glaring weaknesses. While basically the entire team outside of Marcus Morris has ranged from underwhelming to disastrous this season, the point guard rotation remains the weakest point on this anemic roster, despite having three former top-10 picks making up the rotation. All three have their own attributes they bring to the table: Frank Ntilikina provides lockdown defense and intimidating handsomeness, Elfrid Payton provides general competency running the offense, and Dennis Smith Jr., before he went full Knoblauch, provided penetration and drive-and-kick ability.

But there’s one very crucial skill missing from that list. The fact that Frank is the best outside shooter by a decent margin is a stunning indictment of the makeup of this team’s guard rotation. After all, we’re living in a post–Ruined Game era, one where it’s almost impossible to survive having multiple non-shooters on the floor for extended stretches. Only three teams in the league have played out a majority of this season without a single lead guard shooting at least 35% from three: the Knicks, the Kings, and the Magic (although now that the Wolves have traded away Teague, they’re soon to join the list).

The lack of perimeter threats from the guard positions affects the entire offense. It’s the reason Morris and Julius Randle have to handle the ball as much as they do, which in turn is why the Knicks have the third-lowest assist percentage in the league, the ninth-slowest pace. And, crucially, it’s the reason they’re dead last in three-point makes per game (10.0) and 28th in attempts (29.9).

This is a persistent problem for the team, as it marks their sixth consecutive season in the bottom 10 of made three-pointers. But it just so happens there exists a man currently in the greater Knicks family who could at least help the team take a step back towards being a modern offense.

Lamar Peters may not have had a productive summer league, but the undrafted three-year Mississippi State guard has been tearing up the G League all year long. In Westchester’s second game of the season, Peters posted a 20-point, 11-assist game, and he followed it up with 28 points, six boards, and five threes.

There’s a lot to like about the 21-year-old lefty’s game. He’s generously listed at six feet, but he’s got big shoulders, longish arms, and quick feet, and though he’ll never be a positive as a defender, he’s pesky enough to give himself a shot to make it up on the other end. He’s also a solid, if unspectacular, floor general and is currently 14th in the G League’s assist leaders (6.8) with four games of double-digit assists, but he’s also 121st in assist-to-turnover ratio and fifth in turnovers (3.8) among guys who’ve played at least 10 games.

But ultimately none of that matters, because if you’re playing “Parking Lot Peters,” you’re doing it for one and one reason only.

Peters is a big-time shooter. He has the G League’s second-best game high for three-pointers this year with 10 in a win against the Windy City Bulls, and is fourth in made threes a night among guys who’ve played more than 10 games. He’s also fifth in made above-the-break threes per game, shooting 40% from there. He’s hit more than five threes six times this season—the entire Knicks team has two such games, and they both came from Marcus Morris.

Having a ball-handling shooter with gravity at the top of the key would open up the game for all the key Knicks. Guys like R.J. Barrett and Randle need all the spacing they can get for their often awkward, tunnel visioned attacks. The more people outside of the paint, the more freedom Mitchell Robinson has to go for lobs and cuts around the hoop.

Peters can also work as an off-ball threat, allowing Barrett more opportunity with the ball in his hands, which is what the Knicks need from their prize rookie to make good on his third overall selection. Peters can make shots in tight spaces and shoots over 50% from the corners.

The Knicks don’t currently have a roster spot open, and are struggling to get their young guys playing time as it is. But it seems very possible that between the trade deadline and buyout season at least one spot opens up, and if it does, calling Peters up before another team gets a chance to should be a no-brainer.

All over the league, older college point guards who were drafted late or undrafted have been able to secure productive roles on good teams—Jalen Brunson, Devonte’ Graham, Malcolm Brogdon, Monte Morris; the list goes on. Whether Parking Lot Peters can join their ranks remains to be seen, but there’s only one way to find out.

»READ: Where does Kenny Wooten fit in all of this?