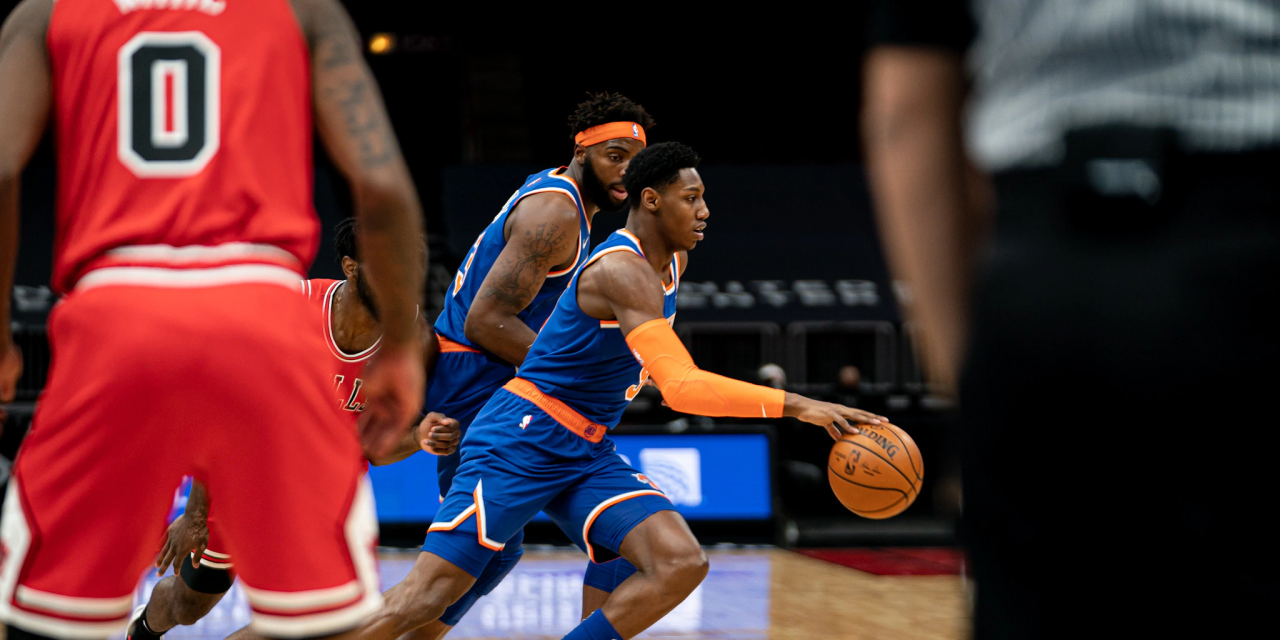 The Knicks, on the second night of a back-to-back, had their defense poked by the Bulls just enough to squeak by on Monday night.

The New York Knicks (9-13) opened their two-game series against the Chicago Bulls (8-11) with a loss. New York looked sluggish on defense and couldn’t generate consistent offense for a good chunk of the game before coming alive in the fourth quarter. The latest Fake Knicks Comeback ended with a final score of 110-102.

The Knicks looked like a team coming off a back-to-back to start the game. Their typically stout defense was porous and lifeless. The Bulls found open looks with ease. The Knicks didn’t fight over screens with any tenacity and Chicago made them pay, shooting 57.9% in the first quarter.

New York’s offense was inconsistent against Chicago’s weak defense for most of the contest. Beyond-the-arc shooting as cold as the winter storm befalling the northeast—a frigid 6-of-29 shooting on threes—restrained the Knicks offense, as they shot under 40% from the field in the first half. Still, they kept the score close thanks to lights-out shooting from the free throw line, shooting 22-for-26 from the charity stripe. Mitchell Robinson chipped in some second-chance points to help—ceaselessly fighting on the glass and collecting six offensive rebounds—but he also got himself in foul trouble by picking up two fouls in the game’s first six minutes.

A seven-point onslaught in the first two minutes of the third quarter helped propel the Bulls. R.J. Barrett tried to dig New York out of the hole by converting tough buckets against rookie Patrick Williams, but it wasn’t enough. The Bulls simply seemed to have fresher legs than the Knicks. New York wasn’t able to generate clean looks on offense consistently enough to take the lead at any point in the second half. They also weren’t able to corral the Bulls’ offensive stampede.

The Knicks scrapped for buckets throughout and clamped up as the fourth quarter arrived. Immanuel Quickley scored five points to open the final period and New York cut Chicago’s lead to one point several times. They increased their defensive activity, too, forcing the Bulls into taking tougher shots and deflecting/stealing Chicago passes. Offensive rebounding also helped the Knicks down the stretch, and a second-chance shot from Quickley gave the Knicks their first lead of the second half.

QUICKLEY FOR THE LEAD OFF THE BROKEN PLAY! pic.twitter.com/zv30zDw9V1

New York and Chicago traded buckets as the clock wound down. Ultimately, the Bulls secured the win with a Coby White triple to take the lead, a Julius Randle turnover, and a Zach LaVine dagger from beyond the arc.

Markkanen finished with 30 points, one shy of his season-high, on 11-of-18 field goal shooting and 6-for-12 shooting from deep. LaVine scored 21 points on 8-of-16 shooting. Thad Young contributed 13 points, eight rebounds, and eight assists off the bench.

Battle of the power forwards

Julius Randle and Lauri Markkanen went toe-to-toe throughout the game.

Randle repeatedly bulldozed Markkanen, a poor defender, to get to his spots and score. He did the same to other Chicago defenders to the tune of 18 first-half points.

The second half was a different story for the All-Star hopeful. The Bulls doubled Randle in the post, which often resulted in takeaways and held Randle in check. He finished the game with 23 points on 7-of-16 shooting from the floor and 8-for-9 shooting from the charity stripe.

Meanwhile, Markkanen torched Randle and the Knicks with the opposite approach. The Finnish forward rained threes over the Knicks’ defense, sinking five three-pointers in seven tries to go along with 23 points in just the first half. He also pierced New York’s defense with some finishes at the rim off of backdoor cuts.

Pick-and-pops played a big part in how Markkanen found open shots. The Knicks failed to communicate several times, both occupying the ball handler while giving Markkanen unimpeded looks at the basket, which he cashed in at a high rate. He led the game in scoring with an even 30 points.

While Julius Randle had a decent game, fellow University of Kentucky alums Immanuel Quickley and Nerlens Noel were some of New York’s other top performers.

Though his scoring from the floor wasn’t very efficient tonight, Quickley provided some positive play off the bench. He made some clutch shots in the fourth quarter that chipped away at Chicago’s lead and eventually swung the score in the Knicks’ favor. The neophyte found his Kentucky counterpart for scores on a few occasions.

Noel blocked three shots in just the first half. He provided tough interior defense throughout the game, which was especially important considering Robinson’s foul trouble. Although he unraveled in the fourth quarter, he provided stability inside during most of his minutes. He finished with eight points, seven rebounds, and five blocks.

Chicago’s fast-paced, perimeter-oriented offense shredded New York’s defense for most of the game. New York ramped up their defense when it mattered, but it wasn’t enough to come out on top.

The Bulls opened most of their possessions by setting high screens, setting up in various locations near top of the key or foul line. New York got caught on those screens time and time again, which allowed the Bulls’ ball handlers an open floor to work with. From there, Chicago found open players that either took (and often made) the open shot or swung the ball around to further stretch New York’s defense.

Chicago also found terrific success with backdoor cuts. As the attention of Knicks’ off-ball defenders was momentarily drawn to the ball, the Bulls darted towards the hoop and received timely passes, oftentimes with no defenders close to them. Easy baskets like that helped the Bulls build up and maintain a lead.

Once New York started contesting Chicago’s shots and rotating with more urgency, they were able to draw the game closer. Their intensity picked up, and they only surrendered 21 points in the fourth (last-second free throws pushed it to 26) after giving up at least 25 points in the first three quarters. In crunch time, Chicago (mostly LaVine) simply made the tough shots they needed to in order to win.

Tom Thibodeau’s team was inept at displaying the defensive prowess that he’s is known for against the squad where he got his first head coaching stint. Granted, the conditions were fairly tough—an on-the-road second game of a back-to-back against an offense that can go nuclear from beyond the arc is a tough draw.

New York will have another crack at Chicago on Wednesday at 8 p.m. ET.