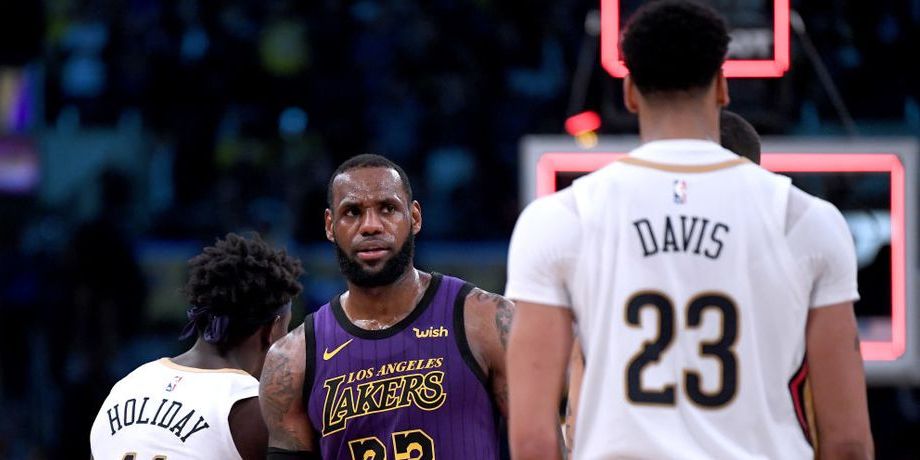 A promising young core wasn’t enough to propel LeBron and an injury-plagued Lakers team to the playoffs. Could their regular season struggles dissuade Durant and Kyrie from coming to New York?

It’s been easy to revel in the demise of the Lakers’ first season with LeBron. Lakers fans are as unbearable as they come. LeBron signing with L.A. cranked up their obnoxiousness to new heights. In July, they were mapping out parade routes—today, they are mapping out lottery odds.

A groin injury on Christmas Day was the powder keg to the Lakers’ nightmare. It sidelined LeBron for the next 17 games, during which the Lakers went 6-11. Unlike the East, where a stretch like that doesn’t kill your season, the West has proven to be a different beast. James’ absence sent the Lakers flying down the standings, and their glaring problem—star-level help for their aging star—was put on blast.

The Lakers tried to address their poor planning around LeBron with the Anthony Davis shenanigans. The failed power play by LeBron’s camp and the front office to salvage the season has now all but doomed it. The young guys probably hate LeBron, and LeBron knows this group isn’t the group with which he can go to war against the Warriors.

It has reached rock bottom in Hollywood. The Lakers have started to wave the white flag, deciding to limit LeBron’s minutes for the rest of the season so he can dedicate more time to work on 2 Chainz’s new album. As funny as it is to see the Lakers trip, if you’re a Knick fan, these developments have to concern you with regard to Kevin Durant and Kyrie Irving. The NBA is a copycat league, and the Knicks have made no secrets about utilizing L.A.’s recent rebuild blueprint to get their star(s).

Like the Lakers last summer, the Knicks will head into the summer pitching Durant and Kyrie on a team to call their own, with a young core and cap flexibility. A few weeks ago, that sounded like that would be enough. Now, with LeBron’s recent flop, and the nonstop media frenzy surrounding their every move, Durant and Kyrie might have taken a step back to reconsider their summer plans.

Chris Broussard says Kevin Durant and Kyrie Irving are leaning away from going to the Knicks. So where might they end up? We discuss. Next on @undisputed

The copycat trend is not restricted to teams. Durant has been chasing LeBron his whole career. His career arc has mirrored his idol-turned-rival’s, down to the one-and-one contracts and talk shows. Bringing the Knicks back to glory was the type of move that could catapult Durant over LeBron. But the prospect of facing this challenge alone has lost its luster.

Potential is no longer an enticing pitch. With the Lakers, we are watching the ill effects of banking on the unknown of player progression. Last year, Ingram was a young Durant. Lonzo was Jason Kidd 2.0. These predictions did not pan out, and now LeBron might trapped in mediocrity, and has become a punchline. Durant and Kyrie, known for their thin skin, have to realize this could be them next year.

This puts the Knicks in a precarious position with the summer rapidly approaching. The Durant and Kyrie dream is far from dead, but it might require an aggressive approach.

Mitchell Robinson and Allonzo Trier have showed promise, but the blowback on some of the other Fiz Kids has already begun. Kevin Knox’s historically bad season has raised valid questions about his potential. Frank Ntilikina has been (wrongly) labeled a bust for quite some time, and now might be moved as soon as draft night.

Even if the Knicks add Zion Williamson or R.J. Barrett, is that enough to get Durant to leave the perfect situation? Or for Kyrie to choose NYC over a reunion with LeBron? Youth might not hold much appeal to free agents, but it still does for teams—specifically teams on the verge of losing their franchise player.

The Knicks tried to make a move for Anthony Davis at the deadline. The unlikelihood of Kristaps Porzingis staying in New Orleans shelved those talks. One caveat that came from brief negotiations was the possibility of striking up talks again if the Knicks win the draft lottery.

Zion Williamson is someone you can sell a dream on. But even if he reaches his ceiling, is he better than Anthony Davis is right now?

Davis gives the Knicks something real to sell to Durant and Kyrie. It’s the security blanket LeBron disregarded when he went to L.A.—but it comes at a high price.

The biggest threat in the Davis sweepstakes are the Celtics, who said everyone is on the table. That means the Knicks would have to beat an offer centered around Jayson Tatum. The first pick alone is not enough to trump that. Davis could very well cost the first pick, and a majority of the young core, including standout Mitchell Robinson.

Moving Porzingis created two clear paths—move the title window to the present through free agency, or extend the rebuild through the draft. Sources have told Marc Berman of the NY Post the Knicks “will be active” on draft night, so the front office is well aware of the stakes. Ntilikina’s name in particular has been linked as a possible piece in a proposal to the Pelicans.

Before fans get PTSD from the ‘Melo trade roster gut of 2011: this is a wildly different situation. When the Knicks traded for ‘Melo, it was not to lure LeBron to NY, but to compete against him. The move to add Anthony was more to save face after whiffing on the real prize in LeBron.

This time around, trading for a star can help reel in other stars. Land Davis, and your chance at bringing in Durant, Kyrie, or both, skyrockets. Not landing AD likely means it might be the quiet summer Steve Mills warned us about back in December.